Two LPs by Mattin that were apparently released in early 2010 but showed up on my doorstep only recently. The first deals, more or less traditionally, with music, the second not so much. Mattin will be appearing (what that entails, who knows? or even if he'll appear) along with Jarred Fowler and Rind on Tuesday, 11/22 at 208 Bowery, 2nd Floor at 8PM. 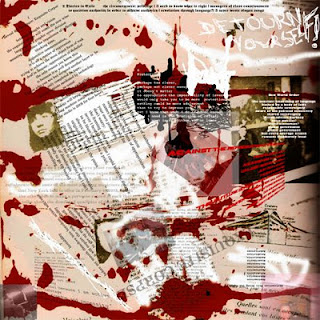 The idea is simple enough: four parts of each of ten songs recorded independently, with only the lyrics serving as "graphic score" of a kind, limiting the length to standard pop's three minutes, layering the results without discrimination. MIMEO's "Sight" was a far deeper exploration along tangential lines, including as it did the advice to think in terms of the communality of the ensemble despite being geographically isolated. Perhaps the same idea was at play here or the members thought of it themselves. I also found myself recalling Gavin Bryars' wonderful "1, 2, 1, 2, 3, 4" on that mid-70s Obscure disc, wherein the group member recorded simultaneously but outside the range of hearing each other, beginning a written piece together (in this case a loungy jazz number) but gradually, inevitably, drifting apart.

In any event, we *are* presented with a commodity here, another in a long string of seemingly contradictory product emanating from Mattin who might just as likely sit and stare at his performing partner for the duration of the set, recording what transpires, playing it back immediately, or not show up, or interrogate the audience. Not sure if this is the "last" item which presents a fairly traditional musical approach (in ultimate outcome, if not in means of production). If I attempt to describe what it sounds like...oh, a bit of Boredoms, maybe some DNA, any number of groups straddling the noise/rock divide. At times, rather amusingly, it brings back memories of Last Exit or Arcana. It's perfectly listenable, very loose, Failure's guitar chiming, Fankbonner's drums supple and varied and, probably (not surprisingly) Garcia's bass, rough-hewn and uncompromising, supplying the most material of lasting interest. Mattin's vocals are suitably disjointed and glossolaliac. 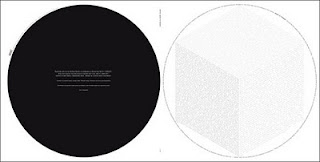 When I opened the package in which these LPs arrived, the knife I used left an incision directly across the black circle that occupies most of the back cover of this release. Seemed appropriate, somehow.

I find this one a good bit more interesting, ultimately, than the Exquisite Corpse album, largely due to its fine juxtaposition of the abstract and concrete, the latter consisting of the spoken words of Mattin, recording his thoughts on (I take it) a range of subjects, which he then distorts, cuts and otherwise manhandles, removing any real vestige of meaning with the exception, possibly, of tone of voice. In this sense, one recalls Lucier's "I Am Sitting in a Room", though the end result falls in territory adjacent to Ashley's "Automatic Writing". Not to make a qualitative comparison, just an elemental one.

Side A is quiet, Side B, less so. Sometimes the words are intelligible, more often not, slowed to an indistinct mumble. Electronics interfere like a mal-tuned analog radio. Sonically, it works quite well, balanced, slithery, interruptive. That's part of the irony, I suppose, that one is unable *not* to listen (at least, that's the case with me) without making assessments that are more aesthetic than political. One can expand upon the attempted portrayal (and understanding) of ideas made impossible by the corporate chaos around us, though that's not a particularly deep thought, both obvious and subvertable. So one listens to it as sound, contravening what I imagine Mattin's preference would be. And it works quite well, though my favorite aspect might still be the knife cut I made in the sleeve.