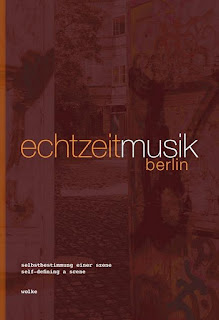 If one was going to choose a city for which to extensively document the recent history of what's come to be known in these parts as electro-acoustic improvisation, my first pick might be Tokyo, but Berlin would certainly be up there. This handsome book goes a long way toward providing a history (not the history, as the editors are the first to say) of the Echtzeitmusik ("real-time music") scene from the early 90s through 2010.

The first section of the book deals with memories of the specific locations wherein echtzeitmusik flowered. It's likely the least interesting portion, being more a rundown of venues, how they became such, how long they lasted etc., combined with certain memories of same. One does have the impression that it was much more of a squatter situation in many case than it is/was in, say, New York. I sort of picture a number of ABC No Rio-like rooms...The exception to this run of relative dryness, oddly enough, is non-Berliner Rhodri Davies' warm and beautiful recollection of his years in the city, from 1997 to 1999.

The remaining portions are devoted to discussions of ideas, ranging from the specifically musical to the social and elsewhere. [I beg for forgiveness on the perfunctory nature of the capsulization that follows, but I just don't have the time to go into each area in detail] Much of it will be generally familiar to those readers who have spent a good deal of time in conversation with musicians in this neck of the woods (and/or who are musicians themselves); most of the issues are those that routinely surface. This isn't to say the discourses are of no value--they often are and, at the end of the day, it's good to have them assembled in printed form in at least one place--just that expectations for discovering new, crucial insights should be kept at a minimum. Diego Chamy's piece, "The Interaktion Festival: A Critical Defense" stood out, to me, for its fine questioning of premises, something that's always of great value. As is often the case, he'll aggravate many, but I imagine he'd consider it a failure if he didn't.

If I have a complaint, it's that some of the pieces, not unexpectedly given the number of contributors, are a little humdrum while others, in the context of purportedly discussing the scene and interesting aspects thereof, end up being little more than a rundown of what that individual has been doing recently.

But overall, Echtzeitmusik is a solid enough job and certainly a valuable attempt at, at the least, beginning to describe and document this area of the music. Well worth reading for almost anyone involved.