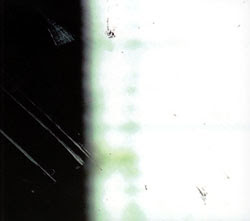 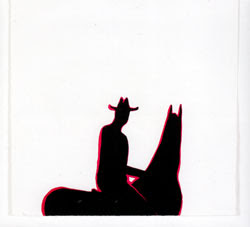 The two new Erstwhile releases stand in something of a contrast to recent albums on the label, being (to my ears), less strictly idea-oriented and more concerned with pure sonic attributes. In some ways, I here them as similar to recordings like "eh" and "Lidingo", which is all well and good.

Olivia Block makes her label debut, paired with Greg Kelley in his first appearance on Erstwhile since "Forlorn Green", although the overall cast of the session seems more firmly located in her neck of the woods, which is to say very thick and richly layered, possessing a massiveness and spatial volume. She plays a bit of piano here and there (once unfurling a couple of strikingly Tilbury-esque arpeggios, elsewhere within the piano's string-bed) but it's her electronics that predominate, finely integrated with Kelley's trumpet, enough so that it's often difficult to pick out the horn from the diverse soundscape.

Though the five pieces have enormous dynamic range, there's never a sense of sparseness; even at its quietest, you get the impression that even the gossamer strands that are barely discernible are tightly connected and possess great tensile strength. And when things get churning--or tumbling--look out. The sheer sound is marvelous through most of the set, especially those moments, beloved of Block, wherein one experiences loud but slightly dulled bangs, like crates being jostled in the hold of a cavernous ship, similar to the ambiance of her "Heave To" but here augmented by Kelley's ferocious rushes of wind power and tin plate-induced buzz. The fourth cut, "some old slapstick routine" is almost bravura in its deployment of crashes, wheezes, bangs and piano, a marvelous explosion of densities, colors and plasticity.

It's interesting re: the title, "Resolution" that had we read this in 1970, wed likely think of "moral determination" whereas today, I daresay, we think in terms of sensual acuity. In any case, I hear this as quite a sensual release, and a very good one.

There's a somewhat similar feel, at least to these ears, with the Noetinger/Guthrie recording, not in actual sound but in the sense of being immersed in a purely sensual world, here defined by electronics and percussion. It's a more prickly clime, more spittle and nails, but contains the same kind of richness and viscosity.

Twelve cuts that, though often differentiated by a brief gap, read decently enough as a continuous suite. There are different tensions in play here: a bit of a musique concrète resonance via Noetinger and the slightest of free jazz allusions on the part of Guthrie, who's been investigating that territory in recent years.

Difficult to know what to say apart from simple descriptives; for all its grit, there's a certain airiness at hand, the whirs of the tape decks seeming at some physical distance from Guthrie's clatter. Perhaps that's one aspect, that there's a strong feeling of twoness here whereas "Resolution" has a kind of unity that, had I not known otherwise, might have made it difficult to ascertain the number of people involved. "Face Off" (and perhaps this is apropos given the filmic reference of the title) strikes me as more of a dialogue, even (heaven forfend!) a conversation. Whatever, it maintains interest absolutely throughout. Listeners aware of the prior work of both will have a reasonable idea of what to expect, though it's less monolithic that some of Guthrie's electronic work from recent years.

One tends to consider new Erstwhiles in the context of its impressive catalog. While these may not have the conceptual depth of Rowe/Malfatti (not that much does, imho) or the sheer, aggressive innovation of a Taku Unami project, they're each entirely winning baths of sound from two pairs of fine and fascinating musicians. Recommended.

i haven't heard these yet, but i have been highly anticipating doing so for months now, and your review has definitely stoked the coals...

couple of questions. don't all four parties involved contribute electronics to their perspective releases?
and what is the filmic reference of "face off"?

and no electronics from Greg, just the other three.