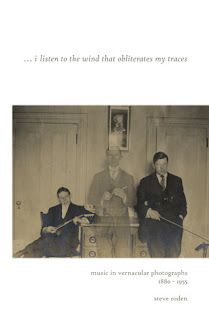 Just a note on this marvelous release, otherwise unrelated to the usual stuff here.

Steve Roden, who, I guess, is actually a bit related to the aforementioned usual stuff, apparently spends a good deal of his spare time trawling thrift shops in search of, among other things, ancient, obscure vinyl and old photographs. He's collected two CDs worth of the former and a bookload of the latter, all consisting of music-related subject matter, in this fantastic volume.

The music dates from the '20s to '40s, the photos from the mid 1800's through maybe the 30s (? not sure, don't have it at hand). There are blues, hymns, folk songs, pop tunes, most of them by people you've never heard of, many of them just gorgeous. Highlights include Nick Lucas (a central inspiration for Tiny Tim! and who appeared on the Tonight Show wedding of same) crooning, "If you Hadn't Gone Away", Eva Parker's stirring rendition of "I Seen My Pretty Papa Standing on a Hill" ("He looked just like a ten-thousand dollar bill") and an awesome jew's harp performance of "The Old Grey Horse" by Obed Pickard.

I've posted a couple of selections on facebook to deafening silence from the eai community (:-)) but what the hell...it's great music.

Oh, and their Fahey set contains its share of gems as well.

I liked it too, Brian. http://www.chicagoreader.com/chicago/dust-to-digital-steven-roden/Content?oid=4456763