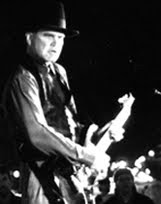 Went to Poisson Rouge last night for the first time. I had many misgivings about the venue itself, far more a "club" situation than I'm generally comfortable with, especially if I have the odd idea of actually listening to the music. A large basement room and bar, it has, for the last couple of years I think, been hosting relatively adventurous fare, which is to say to the right of Issue Project and the left of...I don't know, any dozen hipster places. What finally drew me there was the pairing of the Wingdale Community Singers and the reuniting, after some 20 years, of an incarnation of the Golden Palominos.

Not that I was expecting so much from the latter, but I was a big fan in the mid 80s and enjoyed some work off and on after that, plus I do love me some Wingdales. I'd originally planned to bring Linda but a harsh cough and blood pressure attack on the part of her sister on Thursday meant she couldn't really leave her last night. Happily, Carol could make it so off we trooped.

It was an early showtime (a third band opened)--7PM and we arrived about 6:45 to see about 25 people on line outside. My doubts grew upon seeing a bouncer-type near the door (somehow, an unnecessary proposition when Keith plays here) and worsened when another fellow came down the line tying a plastic band around our wrists. It was prompt, though, and we filtered down the red-lit stairs into a large dark room with a low stage to the left, a bar at the rear, an elevated (reserved for folk more special than us) area and....only about eight tables. I think they adjust on an individual basis as to whether the room is to be set up with more sitting/eating options (they serve food, after a fashion) and decided this event, attended to largely by people around my advanced age, would prefer to stand and rock out. Um, no.

Luckily, Carol and I managed to snag just about the last set of two stools and a little table, off near the right side of the stage area. We satisfied the two-item minimum (and then some) and nestled in.

First up was The Walking Hellos, an all-female quartet with banjo/accordion, guitar, bass, drums. They were moderately enjoyable, the brief songs tending to get stuck in a certain kind of rut where the piece would shift from delicate and dreamy to darkly, strongly rocking, with a touch of prog edge. Competent, a bit of fun but not too memorable.

The Wingdales were up next, the basic quartet (David Grubbs, Nina Katchadourian, Hannah Marcus and Rick Moody) augmented by double bass and trumpet. I'd seen them at Issue Project last year and have their most recent disc, "Spirit Duplicator", both of which I liked--this show blew them away. Grubbs had been unable to make the ISP gig and his presence, though not really so pronounced, lends a real fine balance to the band; you have the impression of four strong, different personalities up there managing to blend into a wry, unassuming, sharp and extremely perceptive whole. I've still been unable to come up with a better capsule description than post-Roches, but while that applies most obviously on the vocal harmonies, it's also on the lyrical front, though the Wingdales are perhaps a touch more removed and ironic than the Roche sisters. But their observations are wonderfully street-bound and incisive, sadly funny, bluntly political, gorgeously sung and arranged. I sat there throughout with a dopey grin on my face. Great set.

As I said, my expectations of the Palominos were fairly low, just hoping for a fun gig. The crowd had swelled, the standing area full. This assemblage included Fier, Jody Harris, Tony Maimone and a couple of other guitarists whose names I didn't get (and who, I think, had only worked sporadically with the group prior) and, of course, Syd Straw. For the first 2/3 of the set, they pumped out the kind of thick, C&W tinged rock one heard on the second and third albums, including several pieces from same. They were quite tight and juicy, Straw in good form (though she almost radiated "diva") really enjoying herself and staying just this side of obnoxious. All told, it was kind of fun though, as I told Nina when she came over to our table, I really far more enjoyed the Wingdales.

A little bit earlier, Carol had anxiously glanced over a few feet to our right, worried that an elderly gentleman with a cane didn't have a seat. Just as she was about to bring her stool over to him, someone got him a chair and our worries were assuaged.

That turned out to be Robert Kidney. After about six or seven songs with Straw, he took the stage and the band was transformed. No cane needed. What a performer! I barely know his work, really only the name and the track or two he did with the Palominos--someone will have to clue me in on why he's not far, far better known. A commanding presence, belting out lines in a deep, scary baritone, jowls quivering, fingers pointing, spitting invective. Man, was he good. The band fell into line behind him, becoming way more raunchy and blues-drenched. I know he's part of The Numbers Band but have no idea if that music is on this level.

He departed, Straw came back for a couple of songs, the crowd roared.

So, not remotely akin to my normal concert-going routine but you never know. One and a half fantastic sets of music (Wingdales = 1, Kidney = 1/2), well worth putting up with the club nonsense and setting. At least once in a while.
Posted by Brian Olewnick at 5/08/2010 08:08:00 AM

Robert Kidney--a name I hadn't heard in years. I used to see him on occasion in Athens, Ohio (circa 1979) with his Akron-based band 15 60 75 (aka The Numbers Band). David Thomas of Pere Ubu released 45s on his Hearthen label. The band was great; growly, grooving guitars, horns, thick beat. Soulful yet aggressive. Terrific live music. Robert was upfront center, playing jagged chords, concentration showed via piercing eyes and was always chomping on his jaw as if chewing a huge wad of gum.

Jealous....I ordered "Jimmy Bell's Still in Town" the next day--looking forward to it.

btw, I get the picture that Kidney's stage demeanor hasn't changed too much...