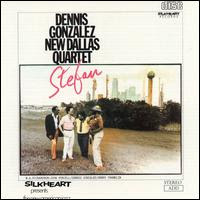 I think it's been since December that I had a chance to dip back into the vinyl. Ridiculous. Left off, coincidentally, with the recently seen Palominos and next in line was my first and sole LP by Dennis Gonzalez, I think once of the scarce few Silkhearts I own as well.

I recall, upon buying this, reading the liners and noticing that Dennis was born exactly on my birthday, August 15, 1954. I'd never known anyone who shared my birth date so it was a special pleasure to meet him some 15 years later. Wonderful fellow all around, though a side by side comparison should put to rest any astrological bullshit once and for all.

[ok, I know it was 1986, but is there really any excuse for Jon Purcell's apparel here. Sorry, couldn't resist:

Anyhow, a nice record, as I recall one of the later more or less straight ahead jazz albums I enjoyed at the time. Gonzalez, always a pleasure on trumpet, Purcell on reeds, a very strong Henry Franklin on bass (what's his story? why not better know?) and W.A. Richardson on drums. Quite comparable in quality to things being released at the time by Murray, Threadgill, et. al. 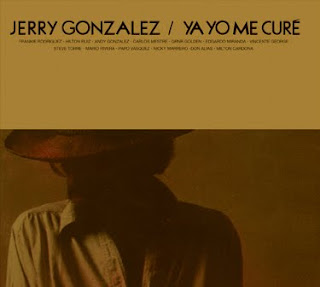 I picked this up on CD just a couple of months ago. The three Santeria-inspired tracks on here are absolutely fantastic, "Agueybana Zemi", "Ya Yo Me Cure" and "Baba Fieden Orisha". This was recorded in 1979, for goodness sake, released by American Clave the following year, I believe their first actual release. Can someone please point this ignorant gringo to more music like that?! The four jazzish tracks (Nefertiti, Evidence, Caravan and, to the extent it qualifies as such, the Lucy Theme (!) are fine and fun but, imho, don't hold a candle to the others. Well worth picking up for those pieces, still just incendiary. I hope I've just missed it, but I never encountered the same rawness in this type of situation/band subsequently. And, oh yes, great cover photo. 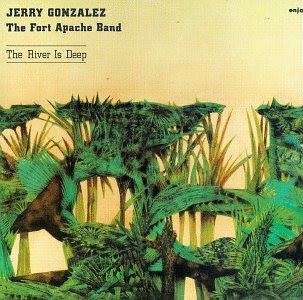 I think this was the Fort Apache Band's next record, issued on Enja, recorded live in 1982. Somewhat similar structure, though shorter shrift is given to the chants, just two pieces, some eight minutes total. The longer elaborations on bop standards ("Bebop" and "Parisian Thoroughfare") again are fine and can totally stand alongside para-traditional work being done by others around the time--Gonzalez is a fine trumpeter--but I don't hear as much specialness as I do on the chants or the rumba "Rio Esta Hondo", for that matter. The closer, "Wawina Era Wo", is pretty great, reminding me more than a bit of some of the music on Clifford Thornton's great "The Gardens of Harlem". Good recording.
Posted by Brian Olewnick at 5/14/2010 12:53:00 PM