A new batch from Another Timbre.... 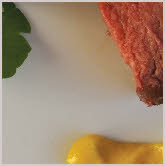 Rowe's ongoing "battle" with the saxophone continues, perhaps an updating of the Doneda/Leimgruber collaboration, "The Difference Between a Fish" (Potlatch). Here, however, he's in the company of younger musicians who, at least on the surface, are somewhat more in tune with his concerns and the result is decidedly happier, if not earthshaking. Both Küchen and Wright retain enough recognizable saxophonics to present a challenge to Rowe and the odd, reedy shriek or bellow surfaces now and then, but by and large they sublimate those urges, operating near one or another periphery of their horns, with attached, vibrating metals in play as well as the growls, breaths, and buzzes one would expect. Rowe is quite recognizable himself, especially with the hand-held fans and their telltale buzz-saw emanations; this may well have been during a still ongoing phase where he's re-examining approaches from the recent past, ones he'd abandoned for a few years. In any case, these are all rather technical concerns, and if one simply lies back and concentrates on the music, ignoring its sources, it's a satisfying affair. I don't hear the same level of concentration on Rowe's part as I do when he's collaborating with, say, Sachiko M, more that he's content to sink into the existing pool of sounds, prodding gently at times but more often being accommodating. This leaves the saxophonists to push matters along and they do with both care and garrulousness.

It's a good performance and had I been in attendance, I'd have left satisfied. I do think it reveals a bit more on repeated listens, especially the denser interplay between Rowe and the more metallic expostulations from the saxophones, some luscious texture in there. If there's a problem, it might be that for all the lovely portions, the whole feels a tad loose. A minor quibble, though. It's well worth hearing for the contributions of all involved.

(I like the off-center printing on the disc itself very much....) 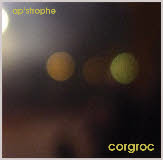 The second release from the duo of Ferran Fages (acoustic guitar) and Dimitra Lazaridou Chatzigoga (zither) (how great is that name, btw?). The disc consists of two pieces, the first about eight minutes, the other some 40 and, so arranged, it's hard not to hear the album as a prelude and a central piece. Hearing it so has its advantages as it forces one to try to grasp the pieces as a whole rather than a sequence of events which, in this case, with my ears, serves to benefit the music. The first track, "spring", begins quite harshly, even unpleasantly, a screechy, raspy sound (tightly bowed zither?) over a wavering, thin drone. It's a little off-putting on its own but "looking back" at the piece, after the gorgeous denouement of softly stroked guitar, one gets the sour/sweet aspect and it feels like a solid whole.

Similarly, with greater complications, for the long work. On the one hand, it seems to take a while to really find its groove but after it does, you realize how necessary the initial, more meandering parts, were. It opens with delicate, bowed drones, jangling a bit, very pretty then subsides into a very sparse are, all isolated squeaky bowings and soft plucks and taps. Almost imperceptibly, things begin to gel, the two instruments edging into more plaintive tones, still spare, but with emotional resonance. It's not a straight path, though, wherein lies much of the fascination. They veer of into several pathways, some less promising than others, enter some enticing buzz-saw environs and eventually "stumble" into a peaceful, serene glade of sorts, humming and vibrating more solidly, more convincingly than at the beginning. It's quite a lovely journey, imaginatively (if unconsciously) plotted. 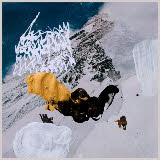 I find this oddly difficult to say much about. It's fine, solid, enjoyable but somehow routine. That melding of more or less tonal acoustic guitar and Toshi's nimb-y washes can all to easily end up ambling down a pleasant but well-trodden path where, once the general parameters are established, it seems as though anything introduced is ok. Kind of like picking out a melody on an mbira--it's always in tune so no matter what you do, if you have a semblance of rhythmic aptitude, all is well, but it's not nearly as deep as, say, Shona music. A strange analogy, I admit, but if I merely tell you the instrumentation and performers here, you have a pretty decent idea of what you're going to hear. It's a good set but one of those that I think would be more valuable for a newcomer into this area than for us grizzled veterans. 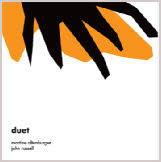 Coming into this batch, this was the one I figured would be the least enticing. An unfair pre-assessment, perhaps, as I only know Russell's work a little bit and, to the best of my knowledge, had never heard Altenburger before, but I (admittedly) mentally grouped it toward the efi end of things. Well, it is, I suppose, but it's also a rather nice surprise. It's far more considered than most such improvising and both players tend toward the lower end of their instruments as well as imparting something of a melodic tinge to much of the music, not overt by any means, but felt. This is all to the good. Does it get too scratchy/scrabbly for my taste on occasion? Yes, it does. Will most readers here be interested? Not so likely. But it's a good set, one I would have enjoyed seeing and hearing.

thanks, Brian
So good to read an intelligent, measured assessment of this batch of discs....

One slight half-correction: on the Kuchen - Rowe - Wright disc I guess you're assuming that some of the sounds most often associated with Keith are being made by him; which some of them are, but mini-electric fans, radios and white noise were being 'played' by all three musicians on this occasion, and often Keith is in fact being out-Rowed by one of the others.

and PS I'm so pleased you were prepared to hear beyond your preconceptions with 'Duet'.
Even though I've always respected John Russell, when he sent it me, I went through a similar thing, at first thinking 'no, it's not 'modern' enough for the label'. But then I listened back a couple of times and thought 'actually this is quite beautiful, much more so than most of the things I'm sent, so why on earth not release it? Not everything has to be cutting edge'

Thanks for the elaboration on the Kuchen/Rowe/Wright, always good to know..