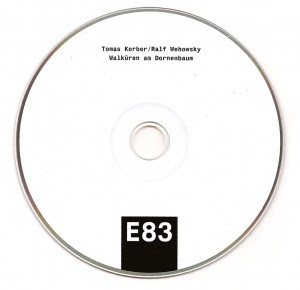 A fine, strong release. My copied arrived bereft of any explanatory information, but Richard's excellent write-up from earlier this month details the working method employed here, essentially using field recordings and possibly other sources in a file exchange routine wherein the music was constructed over a period of several years. You can certainly pick up hints of crowd noise, birds, perhaps insects and other naturally occurring sounds, but they're consistently used in a non-referential manner, purely as sound elements, blocks adapted and nestled into a thick and rich framework. There's a "concrète-ish" sound to it, in a sense, but the vernacular is quite different from what one normally encounters, much less refined (a good thing), ruder even. Even the gentler pieces, like the fifth track, have something of a whip-like aspect, the twangs carrying burred edges, darting between echoing clinks, voices and high, organ-y tones, creating a marvelously complex, hurtling-forward environment. Great work, that one especially, something I'd love to experience in a multi-speaker space.

I had kind of enjoyed the screwy Beloeil release on entr'acte last year, a Casio-driven joyride of sorts. Here, we have a disembodied, synthesized voice counting down from thirty, once a minute, while things fall apart around "her". Tumbling metal, escaping steam, other distorted voices, a regular heartbeat thud, etc. There's a filmic, dystopic feel at play, inevitable in this countdown set-up and it works well as far as it goes, though it has a distancing effect. The steady rhythm becomes more pronounced below "10", the music edging toward the tonal, with a smidgen of Glass. "0" is, inevitably, reached, the electronic rhythm having simplified to a resonant blip and the piece ends, with something of a whimper, no bang. And no lasting impression, I'm afraid to say.

A collection of five pieces, one by each listed above. Mecha/Orga's (Yiorgis Sakellariou) "8:36" sounds as though built from sine tone along with, perhaps, wires vibrating on metallic surfaces, though his site suggests enhanced field recordings. Whatever, the piece is quite enchanting, kind of like taken a sliver of early Reich, a vibraphone portion say, and inflating it. Nice. Field recordings certainly figure into Adam Asnan's "Grumbles, Lapses", rather like a slide show, sections flitting by, naturalistic scenes abstracted by displacement, disruptive, uneasy, some appearing with the abruptness of a struck match. I get the sense of very tight control here, admirable and a little oppressive at the same time. Interesting work.

Yet more field recordings make up the material for "Neenah Foundry", by Pauwel De Buck, from an apartment courtyard and within the building, though here the result is airy and ghostly, not heavy, though brooding. A strong piece, both troubling and lovely. Joshua Convey, a member of Fessenden, probably uses a few as well in his "Tone Change on Pops' Farm", a wonderful piece beginning with shimmering tones that form the substructure for a huge load of more irregular sounds, including bluesy guitar, though that throb never quits. A beaut.

The final track stands quite apart: Adrián Democ's "Dve prosby" (Two Prayers) for flute, soprano and string quartet. Plaintive, tonal and very moving, at five minutes a kind of Eastern European blessing on what's preceded. Why it's here otherwise, I've no idea, but I'm glad it was included; good compilation, worth hearing.

really looking forward to the Korber/RLW, have copies of that en route. there have been very few non-Pisaro/Tilbury releases I can get behind so far this year, hopefully that'll be one.