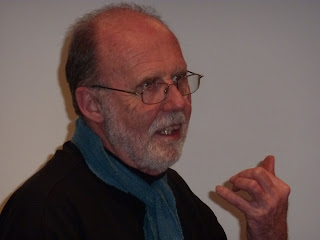 The first ever encounter between Keith Rowe and Jason Lescalleet occurred last night in Boston at the Mills Gallery (a Non-Event event). The second will happen this coming Sunday at diapason in Brooklyn.

It was rather rocky going, which was more or less to be expected. Offhand, the approaches of each don't seem overly complimentary though that very push and pull--Keith more considered, Jason more volatile (oversimplifications, both, but, you know) could serve to generate fine results. At several points during the set (about an hour?) this was indeed the case, though interlaced with what seemed to be more frequent searches for common ground. Rowe had a metal plate in front of his guitar-neck that he rubbed and scraped with various items; he later explained that it was the inverse of the guitar strings, similarly sized but with the open spaces between the strings replaced by solid mass. As is his habit, he probed in the spaces left by his partner, nudging here and there but seeming content to "fit in". Lescalleet had a couple of old tape players, a turntable and other electronica. His contributions, by there nature as tape loops, often had repetitive elements which lent a good ground for Rowe to scrabble atop and within. At one point, Jason generated a very tonal wash, a thick ambient drone which Keith went along with for a bit before attempting to dirty things. The volume level fluctuated, several times reducing to near silence, once violently interrupted by a burst triggered by Lescalleet that momentarily sounded like a speaker loudly shorting.

There were several points along the way, including a lovely multiple-popping, percolating one toward the end, that were fantastic, though the whole never quite achieved a unifying, driving power. But it will be interesting to see how they fare the second time around. Audio seepage from, I think, a bar next door, imparted an odd ending the set as a jazz-bluesy belter intruded through the walls....

Thanks so much for that, Joe! Excellent