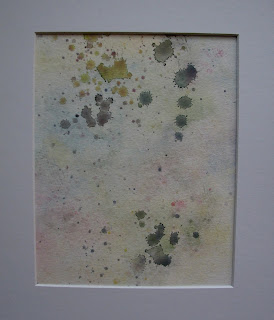 A couple o weeks ago, on the drive up to Boston, Jon mentioned to me the various options laid out by Robert Kirkpatrick (or, Hollow Earth Recordings, mgmt.) for procuring one of his releases. It was in an edition of only five and, should you desire one, you only had to meet him and give in exchange some item of value. Jon had just such an object in hand but I didn't give it too much thought until, later on, I saw the individual packages, about 10 x 12", carefully wrapped in fine, brown paper and my interest, not to mention my latent collector's streak, was piqued. But aside from money (crass) and my keys (not advisable), I had nothing remotely of value on my person. Except some gum. As it happens, "a stick of gum" was one of the items presented as an example of a thing of value in the initial offering, so Robert accepted it and I, feeling quite guilty, handed it over.

I'd been expecting a mere CDR or something. Instead, I was given a matted watercolor (above), on the back of which were attached two CDs in sleeves. A week later, in Jersey City, I gave Robert a watercolor of my own, easing my conscience somewhat.

Not sure how much sense it makes to review something of which there are only five copies extant (don't know if one of the recipients will upload it somewhere) so I won't, really. The release is called "aeolian electrics" and, is the title implies, there seems to be wind-activated sounds in play. I think I would have come to the decision even without the advisory that accompanies the discs, but playing them simultaneously works very well. They're quiet and spacious and, as near as I can perceive, the activities are fairly random. One disc involves ringing metallics (a Tibetan bowl buffeted in some manner by wind?), the other more "whistling wind" (through some aperture?). They compliment each other quite well.

I have them on at the moment on this fine, brisk Saturday morning, drinking coffee, doing the NYT crossword. It makes for a very beautiful environment.

Thanks for writing a bit about this and thanks again for your watercolor - I like it a lot, need to get it framed so I can hang it up. It was great seeing you again and having a bit of a chance to chat. Hope to see you next time you are in Seattle.