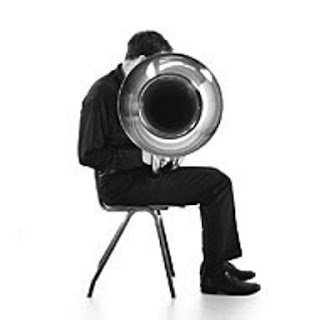 Solo tuba, tough sledding. Seven tracks here from Mr. Hayward, the first four of which seem to form a kind of suite, all involving soft breath tones of one kind or another. Much grain (or spittle) lending a soft bumpiness to the texture, very gray in character, the sort of music that I enjoy more when not listening too closely. Sounded ok in and of itself but was kind of what I'd have expected anytime in the past decade--a studied examination of certain textures, but if didn't really grab me. The fifth track is a 13-minute exploration of plosives, I'd imagine created by valve popping, quite an imposing, even rude little juggernaut, boom-boom-boom almost the whole way through before the regularity begins to splinter. Rather unpleasant in a sense, but forceful. Track six, "Recoil", deals in strangulated tones, again a bit harrowing but here carrying some extra depth, the two or even three simultaneous plies providing much greater richness than the previous tracks. Still, I wish there was more material with the beauty of the final track, "Tone". Hayward returns to the softness of the earlier pieces but imbues it with a powerful sense of beauty, mystery, even sadness. Less than four minutes long but worth the price of thee disc. 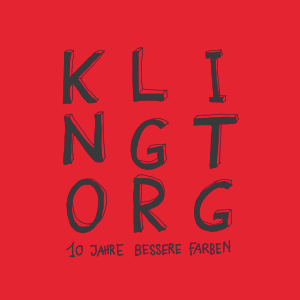 Various indeed. Forty-five tracks spread over two discs, so averaging three-four minutes each. If I have a complaint, it's only that I wanted many of the better of the pieces to go on longer. As is, we have multiple snapshots of the Vienna scene, including musicians passing through.Is it a rule of thumb on comps like this that most stuff is going to be just "ok"? Seems so to me. In any case, there are works I enjoyed a good deal by Alexandr Vatagin, Kazuhisa Uchihashi/Burkhard Stangl, Toshi Nakamura, Susanna Gartmeyer/Thomas Berghammer, Pendler, Jez Riley (French), Nifty's, noid, Los Glissandinos, frufru, Goh Lee Kwang and Angelica Castello. The final track, a giggling Star Trek parody--in Austrian--is painful in a thankfully rare manner. 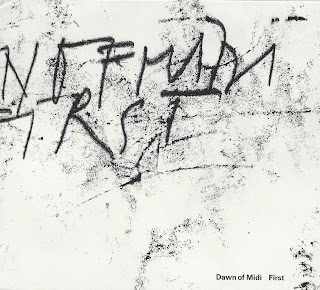 A NYC/Paris based piano trio with Qasim Naqvi (drums, toys), Aakaash Israni (bass) and Amino Belyamani (piano). Maybe it's just me, but almost every time I hear a pretty good jazz pianist these days, I hit on Paul Bley. My guess is that Bley was, in many respects, ahead of his time and over the last decade or so, many folk are catching up, not a bad thing. This trio has something of his improvisational feel (not compositional), which they weld with a certain amount of experimental techniques including prepared piano. All three musicians are quite strong and, more importantly, show a good amount of restraint, allowing each other ample space in which to operate. Israni has a sound that's both large and nicely dry while Naqvi is light and fluid, making for a tasty combination. Belyamani makes sparing use of preparation but when he does, it's an effective color, not used for mere decoration. Listeners searching for rich, post-Bley jazz would do well to check this out. 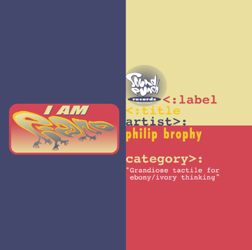 Speaking of jazz piano...the indefatigable Philip Brophy returns with two discs, one of which consists of mutated samples from five notables: Evans, Monk, Garland, Hill and Brubeck. Very mutated, often sliced into small shards (each piece derived from a single 3 to 7 second sample) then reassembled into new rhythmic frameworks and loops, more or less managing to convey the spirit of the samplee. Is it anything more than an (often attractive) technical exercise? I can't say that it is. Artful? Yes, very. Amusing? Kind of. Nourishing? Hardly. Made me yearn a bit for Carl Stone's "Mom's". 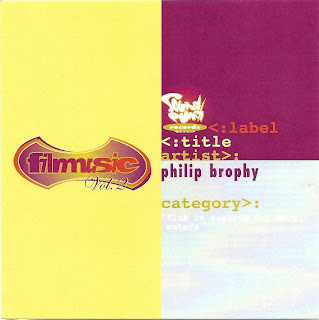 Works for five films, all performed by Brophy, from 1993 - 2005 and a far more enjoyable go. A wonderfully restrained guitar/drum shuffle from "Anyone Home", nice, soft electric keyboards on "The Pining Tree", rich and hazy Hassell-ian resonances from "Whispering in the Dark" and the noir/techno (much fun) from "Maidenhead". This disc ends with a suite of pieces from "Only the Brave", the music lying in some quadrant between Terry Riley and Wayne Horvitz--bubbly and smooth but with enough gristle to satisfy and make for an engaging ride. Not bad at all.

Thanks for all those recommendation. The first album that you recommend. It is one that pick my attetion because Tuba, I only listened on symphonies