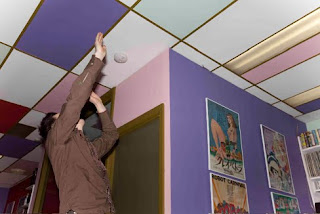 What to make of Philip Brophy's music?

I'd heard three discs of his five or six years ago, wrote them up for all music, in fact, enjoying the collaboration with Philip Samartzis (the superbly titled, "Janet Leigh (dead)") and getting something of a kick out of the others, in the sense of slick pop, well done and knowing.

So here come five more, four of which could be classified in that latter category and another, again, with Samartzis in tow. Those four are all designed as soundtracks, or at least accompaniments to films, though if the listener is unaware of that (and I've not seen any of the movies in question), he's likely to hear the discs simply as collections of pop songs. Off-kilter, yes, but most assuredly pop. 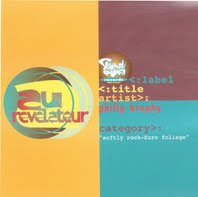 Sound Punch, the label devoted largely to the dispersal of Brophy's music, carries a design motif that actually reflects much of its product quite well: slick, eye [ear]-catching, blandly hip. Each release includes a slyly descriptive subtitle. "Au Revelateur", whose songs were written for a 1968 silent movie by Philippe Garrel (an amour of Nico), is so labeled, "softly rock-Euro foliage" which may be as good as any, as far as capsulized descriptions go. The pieces have a quasi prog-rock, 70s feel, with prominent organ and explosive, orgasmic guitar stylings. And dammit, it's catchy, soothing, succor-giving--all that awful stuff! I may have thought "Journey to White Light" was the most amazing thing I'd ever heard, had I heard it in 1969 at 15. As is, well, it's a helluva lot of fun, all glistening Rileyesque organ-chimes, sighed vocals, percolating along like nobody's business. Is it good? Of course not. But it's fun. Even the two covers of Bowie's "Heroes" one lush, one pared down, work effectively....wait, I'm feeling a sugar overdose coming on...Well, I couldn't in good conscious really recommend this to regular readers here, but what Brophy sets out to do, he does rather well, I must admit.

"Au Revelateur" is my favorite of the four more poppy offerings here. Humorously enough, it was until my second listen that I realized that "Beautiful Cyborg 2" was a second installment of one the Brophy's I'd already received back in 2004 or so. Bearing the sub-inscription, "classical, petro-chemical speedily", and created between 2000-2002, it does indeed reek of techno. Those more versed in the genre than your humble scrivener (which is to say, virtually everyone) may find this rapturous. I must have been in a fairly receptive state when I wrote up the first one for AMG; today, that area strains my patience.

2008's "Kissed", written to accompany Warhol's b&w silent series, "Kiss", ("sexing slap with labial thumps on rumble") begins very much in "Before and After Science" territory, very similar rapid-fire drums with brooding overtones. It meanders overmuch after that, predominant drum parts, which pace the cuts, interspersed with routine synth. Again, quite the pop bonbon and well executed, but (intentionally?) vapid. Um, like many a Warhol....but that could be a sidewise compliment too. I occasionally see a Warhol I've seen a hundred times before and passed over only, in a certain frame of mind, to find something of interest.

Brophy describes the score for "Escape from Andraxus" (the disc is titled, "The Planets") as space-age-bachelor-pad, not so far off. I've heard echoes of "Sextant"-era Hancock on several things in recent months and this is another, maybe with a smidgen of Wayne Horvitz-style soft, mildly funky electronica. I find myself listening to this one more purely as "soundtrack" than the others and it works ok to that extent, though when I concentrate on the actual music, well, pretty bland. Though here as elsewhere, I get the impression Brophy attained pretty much exactly what he wanted. 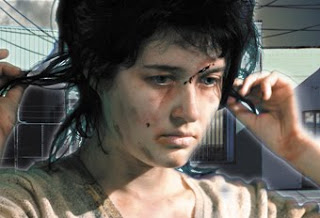 Last up is the release that, coming into this batch, clearly held the most potential: "Northern Void", a 2007 collaboration with Philip Samartzis. It's certainly the pick of the litter for me and, I'd guess, would be so for most readers of this blog, though it's a little oil and water, Samartzis' field recordings abutting Brophy's electronics, the latter varying between music not dissimilar from much of the above and harsher, more noise-oriented work. Designed to accompany a (video of Brophy's that depicts the dystopia of "banal urban peripheries", I can imagine it working well enough in context. The fourth and longest track, "3079", with additional trumpet and trombone parts, is quite beautiful, recalling Olivia Block's work somewhat, brooding, chorale-like lines entwined with abstract electronics, very stirring.

So, an odd collection. It's unusual to find music that's (overall) this slick created by someone who clear knows what's what. Think of it as hyper-Fennesz, maybe. Can't say as I'll return to it often, aside from the Samartzis collab (and perhaps "Au Revelateur" if I'm in the mood), but I'd certainly check out the films if I could, curious enough to hear the music in its proper setting.

Brian, are you aware of the CD that Otomo/Sachiko/Sugimoto made as accompaniment to one of his films?

I mention it mostly because I think you'd really dig it if you don't know it, you can hear the film projector sound the whole way. I have a few copies left for sale.

Yep, have that & enjoy it a lot. Didn't remember Garrel's name, though.