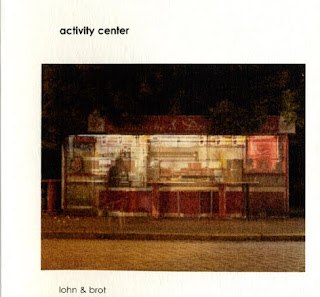 A favorite pairing returns. Something just so right about Beins and Renkel, the ratio of grit to tonal content, ringing to grinding, that tends to make their work simply sound good, which is half the battle. there's a great deal of apparent space between the sounds, very wide open. Too, the pair is quite content to play vigorously, even with abandon, imparting the sense that they're actually be enjoyable to watch. Perhaps "colorfuL' is the word I want. The five tracks are arranged rather symmetrically: Long-short-very long-short-long. On the first, "arbeit:material", they get great mileage out of some bowed strings and rubbed percussion among many other pleasures. Had Malachi avors and Don Moye been born 20 or so years later, in Germany, they might have created music like this. "zone:produkt", the central cut, begins quite agitated and includes spasms of violence; the agitation remains over it's almost half-hour but splays out into a kind of mechanical clatter, a very complex plane of sound with multiple beats and drones in various timbres, eventually settling into a furious kind of rhythmic drone--very, very fascinating. The concluding "station:prozess" is a whirling, dizzying journey via..any number of fervently bowed or struck objects, spiraling off into ever more complex eddies, loosely hanging together by a hum or drum rumbles; it's rather psychedelic, after a fashion. "Activity center", indeed. These guys manage, and it's no small feat, to be almost hyperactive yet never feel busy or overbearing (much less "gabby"), limning out a clear, highly defined space in which their sounds float about and bang into one another. Excellent recording, highly recommended. 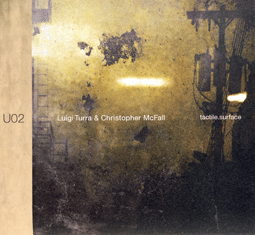 Interesting idea, well realized. Field recordings (quite processed) from two separate geographies, the small town of Schio in Northern Italy and the wide, flat plains between Kansas City and Colorado, interwoven into a sonic double exposure. Underlying hums, layered, form drone structures while echoing clangs and bumps skitter along the top. Pulses emerge, once sounding as though sourced from church bells, dissipate, get absorbed by city noise, large space interiors. There's a bit of loss of focus about 2/3 of the way through but during the final few of its 42 minutes, it flattens out nicely, those rolling plains extending in all directions, featureless yet fascinating. Recommended for fans of that area on the border of filed recordings and drones.

Both of these await my attention here, looking forward to them. A mention must be made of that Activity Centre sleeve image though, just beautiful...