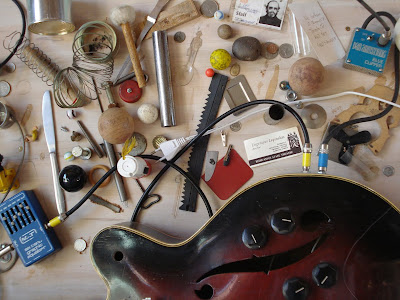 Instead of a listing of individual favorites from the decade, I thought I'd mention those musicians whose body of work meant the most to me during that period.

I think it was October, 2000, in Boston after an AMM show, that I first met Keith. I'd come (unforgivably) late to AMM first hearing their work around '95 and, largely via Jon and the then nascent Erstwhile label, had in the previous couple of years really immersed myself in post-AMM music and in what little was available of Keith's apart from AMM. Over the next ten years, no music made as deep and moving an impression on me as his, in a bewildering variety of contexts. As much, or more than, the music, getting to know Keith as intimately as I have was just as meaningful; one of these years, readers may even see the fruit of that...Virtually every year, live and on recording, he's created consistently probative, dense, severe, cogent and beautiful work, musically, visually and conceptually. As a body of work, it stands above and apart from anything I've experienced. I'll say that, among the many examples, "Duos for Doris" still stands out not only as my favorite recording of the decade but simply my favorite piece of music period. (the whys and wherefores of my experience with its creation can be read here) Contingent with that, mention has to be made of Erstwhile and Jon Abbey, without which (unless by some miracle someone else had stepped in), much of the music would either not have existed at all or would have appeared in different form. Label of the decade? Easy choice. Had I actually compiled a top 10, it would've largely been comprised of Keith/Erst releases. And Keith's still going quite strongly. I make him the early favorite for musician of this decade as well.

And,too, there's Tilbury who, at least as regards "Doris", was quite possibly responsible for more than half of its success. Being so fortunate as to witness him in action, never more overwhelming than at the "Doris" session, has been a profound joy. His recording of Skempton's "Well, Well, Cornelius", his Feldman and his Cardew were all momentous events. I think his "All Piano" appeared this decade as well? Enough said.

I'd actually encountered a few of of the Japanese crew before hearing AMM, notably some early Yoshihide work around 1992. Of all the extraordinary musicians to have emerged from that scene (and there are dozens whose work I love), none has effected me more than Sachiko M. Something about her conception of strength and beauty is absolutely in sync with me and I almost always find her music utterly entrancing no matter how severe it gets. And that part of it, her amazing willingness and persistence in limning out extreme areas, of staying with one thing for inhuman lengths of time. I love it and am thankful for it. Additionally, both I.S.O. and Filament were crucial ensembles for me. Seeing the former at Victo in 1999 opened up worlds.

I maybe should mention another thing that's been crucially important to me, an ongoing project: the investigation of the work of John Cage. I'd known bits and pieces from early on (I recall hearing a recording of Atlas Eclipticalis in college, among other things) and I'd always tried to hear/read/see more, but it was in this decade that I began to make something of a dent. He's been a huge inspiration to me, something I wish I'd thoroughly investigated far sooner. btw, the one time I saw Cage was in the audience of an Anthony Braxton concert at Merkin Hall. I've recently been reading a book on Cage's visual art, which I tend to love; his ideas continue to amaze, inspire and make me laugh.

Olivia Block's recorded output spans the decade fairly neatly and includes some of my very favorite music from that period. She's an outlier in many ways, not eai but knowledgeable of it, willing to use elements that are entirely unfashionable (always a great strength!) including bits of Americana, embedding a kind of narrative structure in her pieces, almost a programmatic one. Her work contains enormous depth and beauty, continues to expand and I greatly look forward to hearing much new music from her in the future.

A recent, most gratifying "discovery" for me has been the music of Michael Pisaro (and, to an extent, the Wandelweiser cadre generally). I've written a good bit about his work here recently so won't go into depth, but it's just amazing stuff. Again, his basic conception is, for me, so sure, so solid, that it seems like most anything that I hear has at least something (usually much more) that grips me.

The Japanese scene in general was the source of any number of tremendous concerts and recordings. Aside from Sachiko, great joy was provided by Toshi Nakamura (personally, as well), Otomo Yoshihide, Ami Yoshida, Taku Sugimoto and many more. Maybe Taku's work from the decade stands out the most, his willingness to go to extremes, beginning from his set at Tonic with Keith and Gunter Muller where he essentially did nothing...I haven't cared for everything encountered down this path but some, like the Live in Australia disc, made a big impression on me.

Speaking of regional scenes, the Iberian one was also a fount of wonderful music. Alfredo Costa Monteiro, Ferran Fages, Margarida Garcia, Mattin, Ruth Barberan and many more. And the Australian scene as well--such great music from Philip Samartzis, Anthony Guerra, Joel Stern, Arek Gulbenkoglu and others.

I'm leaving out much but wanted to include Jason Lescalleet. Among a series of fine recordings, his "The Pilgrim" stands out as one of my favorites of the decade (in some ways, for similar reasons that I love Block's work) and, even apart from that, he was involved in several of the most exciting live performances I witnessed during this time. His ear is astonishing...

"I make him the early favorite for musician of this decade as well."

Out of curiosity, if you had had to make a choice in 2000, who would have been your choice for "musician of the decade" in the 1990s?

In 2000, ie, with what I knew then, I likely would have picked AMM as such, not a single musician. I only began listening to them mid-decade though--likely the musician I heard the most of during that period (in no small part due to the number of releases but also my affinity for his work earlier on) was, gulp, Zorn. Though by 2000, I'd begun to tire of him. Similarly for Braxton and Barry Guy.

The other musician I'd probably mention didn't happen to be alive during the decade, but I began seriously listening to his music around '88 and through the 90s, through today, opening up enormous areas of sound and beauty for me, That would be Morton Feldman.

So it seems like sometime in the mid-1990s, perhaps, your musical tastes began to shift away from "jazz" and towards, for lack of a better term, eai? Is that accurate? Why do you think that happened? Or have you already blogged about this?

I know I've written about it elsewhere, but by 1990, I was becoming pretty tired of new jazz (I've never tired of the jazz I grew up loving, from Ellington through the late 70s, and continue to love it). Even musicians I admired--Braxton, Cecil, the Art Ensemble, etc.--seemed to me to be treading water. I began listening to more contemporary classical (I always had but avant jazz had taken precedence for a long time) and re-investigating the European free improvising scene, something that again, I knew early on but I'd passed on for about 15 years.

In the meantime, I was very much into the downtown NYC scene from the early 80s, some of which I find still hold up but much, I'm afraid, was more surface gleam than substance. Fun, maybe, but not ultimately so nutritious (!)

So in the early 90s, on the improvised side of things, I was awash in Bailey, Parker, Brotzmann, Guy, etc. But Feldman and Cage were exerting more pull and I'd heard things from Otomo that intrigued me, O'Rourke's more abstract work etc.

Reading WIRE was cluing me into a lot of things that sounded very interesting--this was more or less pre-Net, remember, and coming by certain discs wasn't easy. I remember carrying around a slip of paper with names like Polwechsel and Bernhard Gunter on it for a couple of years before I actually managed to hear them.

I finally, belatedly, stumbled into AMM (Newfoundland was my first, I think) and the rest was history.

Interesting. I guess I didn't realize you had become bored with contemporary jazz that early on. I had it pegged at a later date for some reason. From the Aughts, are there any discs that you initially loved, that haven't held up well for you as time has passed?

Sorry, by the way, for the twenty questions. I just find your musical path interesting.

Interesting question, David. One of the problems of being on the receiving end of 200+ discs a year is that it drastically limits the time able to be spent revisiting older recordings (though--not sure how long you've been here--I've been chronicling my recent reactions to my LPs for about three years now)

Offhand, I'm curious how I'd feel now about Cecil's "Nailed", which was my favorite recording of 2000. At a guess, I'd think I'd still enjoy it but might be put off on its more bravura portions. (I could be wrong)

The Brotzmann Tentet would doubtless elicit far less excitement from me, at least on record. Even live, the testosterone overdose would likely do them in, though I can imagine, were they to seriously rock, maybe....

Not sure about Barry Guy's LJCO work, which I loved. Again, guessing, I think the more thematic parts I'd still find very beautiful, probably less so the soloing.