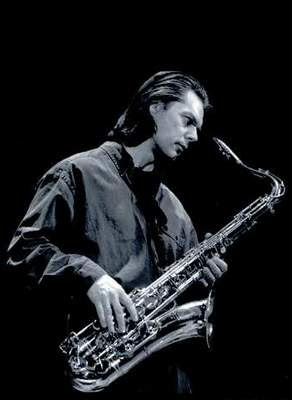 First heard Garbarek on the late George Russell's "Electronic Sonata for Souls Loved by Nature", on which I believe he contributed some of the thematic material. Just prior to that, I guess, ECM had begun to release his work, that fine string of records culminating in "Witchi-Tai-To" (maybe "Dansere"? We'll see when we get there). But the earliest recording is from 1969, I think (released in 1971 by Flying Dutchman), the self-titled debut of his band, Esoteric Circle, with Terje Rypdal, Arild Andersen and Jon Christensen. Annoying, I can't locate a cover image of the LP which feature the sculptures of Gustav Vigeland (here are photos of same): 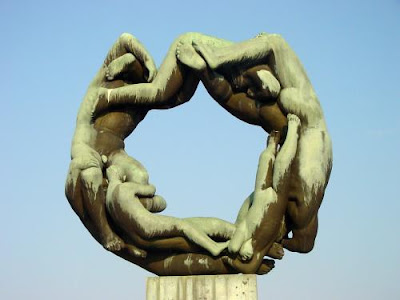 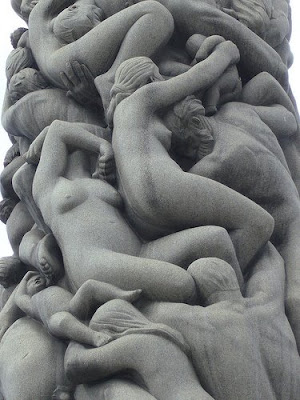 Great record, one of the best proto-fusion albums I know, holding its own with Tony Williams Lifetime or the early McLaughlin's. Rypdal is pretty incendiary, Garbarek is in Ayler/Coltrane mode, on tenor throughout, composing wonderful melodies, moving here, fierce there. It might be argued though, that it's Andersen who really holds things together--what a great tone he had (might still have?), really one of the most under-rated bassists from the time period.

I know there was a recent upsurge of interest few years back when ECM finally released the early Garbareks. Listeners who enjoyed those should certainly get their paws around this one. 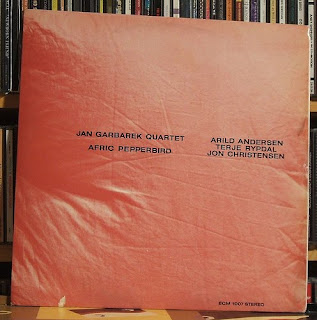 Definitely a seminal record for me. Happy I could find a shot of the original vinyl, much pinker than the disc release, I think, and a great example of an archetypal early ECM cover (recorded in 1970). Wonderful record, strong combination of gorgeous, northern-tinged melodies with tough, imaginative free soloing, each member of the quartet on pretty equal footing. Beautiful miniatures by Andersen especially; what a fantastic bassist he was. Christensen, when all's said and done might be a trifle light for my taste, kind of a Scandinavian Barry Altschul, but he fits in well enough here. Garbarek could write killer riffs too, as in the wildly propulsive "Beast of Kommodo" [sic] which still rocks mightily and the surging title piece (which was used for many years as the opening theme for WKCR's evening jazz program). Then of course, there's "Blupp". Fine recording, well worth hearing if you haven't. 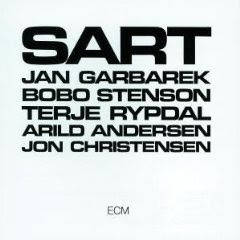 I think there was a period when many of the ECM covers were all text, right? Nice design, anyway. "Sart" is kind of Garbarek's reaction to electric Miles, bringing in Bobo Stenson on piano and e-piano. The title cut especially, with its viscous semi-funky bass and spacey soloing. It's interesting how different his first five ECM albums are from one another, each taking a fairly divergent path from its predecessors. Of this bunch, it might be my least favorite but has its virtues nonetheless. When the piece "Sart" wells up, like a big bubble bursting from the depths of a thick stew, it's powerful enough. The first part of "Fountain of Tears" (titles like that portending ill to come) does point a bit toward Tryptikon and Andersen's (again, brief) "Close Enough for Jazz" is moodily lovely. But there's an air of diffusion that subtracts from the overall effect of the record, imho. 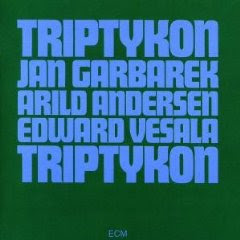 Another fine cover. I go back and forth between this one and the following as my favorite. Pared down to a trio with Edward Vesala and excellent substitution for Christensen (especially in this sort of music), Garbarek pulls a Norwegian Ayler, investigating Scandinavian folk forms from a free jazz angle, and as raw as he ever got. The structures are "loose" again here in terms of a lack of defined heads, but there's a great tautness in general feel, everything seem stretched to the verge of snapping. It's not that it's loud and strident all them time (though there's a good deal of that), just that it all feels tense. In a very good way. Even the closing folk song, "Bruremarsj", which sounds essentially like a drinking song, carries a dark edge. Very fine record. 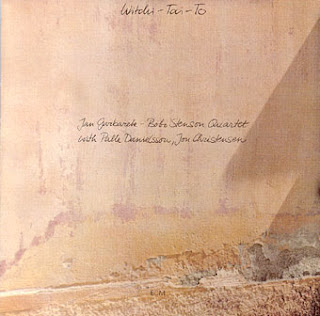 Pound for pound, I might have to consider this the strongest Garbarek release. He had the inspired idea to do covers drawn from the JCOA catalog, Carla Bley's great tune, "A.I.R." from Escalator and Don Cherry's equally beautiful "Desireless" from Relativity Suite, adding in Carlos Puebla's "Hasta Siempre" which Charlie Haden had used in his Liberation Music Orchestra and Jim Pepper's "Witchi-Tai-To". "A.I.R." is given an incredible run-through here, Garbarek on soprano, new bassist Palle Daniellson really driving the quartet (no more Rypdal, this is all acoustic), Stenson in fine Tyner mode. The sole original, Danielsson's "Kukka" is pleasant enough, though unexceptional, but serves as a nice lead-in to "Hasta Siempre" where Garbarek unleashes his inner Gato. The title track begins with the piano trio, working its way to a furious improv on the theme and final statement of same; still gives me a bit of chills, I must admit. "Desireless", on the JCOA recording, was always a real tease, a super-gorgeous melody that only lasts a little over a minute, iirc. Well, here it's stretched out a full 20+, sating this listener quite well. Fine, fine performance. With Holland's "Conference of the Birds", probably my favorite ECM jazz album.

nota bene: this is the first in this particular series that came out on Polydor, thus no longer imbued with that intoxicating German-pressing smell of the earlier ECMs. *sigh* 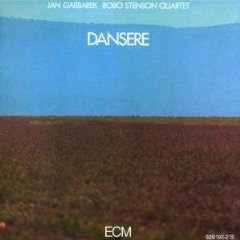 "Dansere", with the same quartet, recorded about two years later, is a nice enough record, but much of the fire is gone, replaced by the (if I may stereotype) Nordic iciness that, as far as I can tell, permeated his work from here on in. This is a big step toward "the ECM sound" (the slight preciousness of the album title and cover photo inch that way as well); the burr has been sanded off some, the melodies are folksier (as opposed to folk-song based) and there's a certain self-conscious ponderousness to much of it. Not nearly as weak as much of what the label would issue in coming years, but it's a sidestep in that direction. Stenson is more Jarrett, less Tyner. Listening now...it's perfectly passable but somehow depressing, like these guys have in the interim become "professional jazz musicians" rather than just musicians. There's more than a whiff of Eberhard Weber over much of it...the pastels are coming...

I'm sure I liked "Dansere" pretty well at the time (1976) but this was the last Garbarek release I bought. Some of that doubtless had to do with my lack of a stereo for a couple of years ('77-'79--stolen from my apartment, couldn't afford a new one) but I'd already given up by and large on the label.

What means coulda? Afric Pepperbird suffices for a lifetime achievement if you ask me . . .

I saw JG two summers ago at Rome's Auditorium. I wish there were pastels...It was pathetic Holiday-Inn food for enthusiastic birds, pumped up hard for better "stunning effect".

The coffin has been nailed since decades....

I always liked records Garbarek was on better than his own contributions, although I haven't heard some of these earlier ones you've mentioned.

I think ECM went through a fallow period, but they've redeemed themselves with the Maneri releases, Evan Parker's Electro-Acoustic Ensemble, and others.

I hope to see more post from you. Thank you for sharing this post. Your blog posts are more interesting and impressive