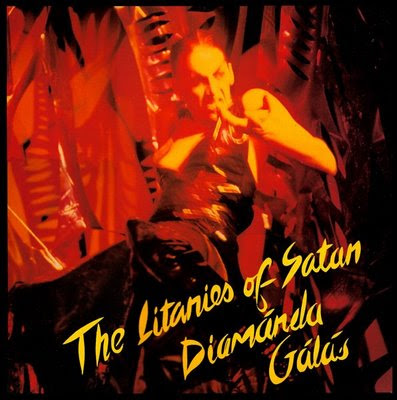 I can't remember what it was that induced me to buy this album back in '82. I'm sure I hadn't heard it on KCR and don't know, at the time, where I would have read about Ms. Galas--maybe Cadence or Coda? I wasn't then (and still am not) a fan of histrionic vocalization, male or female but Galas, at her best (and this is an example, imho) transcends that. Heh, this is one that really drove Linda nuts when I played it loud. A 12" 45rpm, two side long tracks. The title piece makes superlative use of multi-tracking, Galas sounding like a swarm of Baudelaire-reciting demons; fine tape and electronics work as well.

And then there's "Wild Women with Steak-Knives" ("for solo scream"). Of its kind, I can't think of anything more powerful. Pieces like this have always made it difficult for me to listen to the Shelley Hirsch's of the world. When Galas pins you to the wall and shouts, inches from your nose, "And I'm not talkin' about meatballs, I am talkin' about STEAK!", you hie yourself to the meat market. Holds up extremely well, happy to say.

Galas' brother Dmitri, a playwright, was an early victim of AIDS and she would go on to concentrate on AIDS-related themes, more effectively than anyone I've heard (see below). At the time of this recording, 1981, AIDS wasn't quite recognized as a single phenomenon, but some of the brutally sarcastic lyrics point that way:

I commend myself to a death beyond all hope of redemption
beyond the desire for forgetfulness
beyond the desire to feel things at every moment
But to never forget
to kill for the sake of killing,
and with a pure and most happy heart,
extol and redeem Disease. 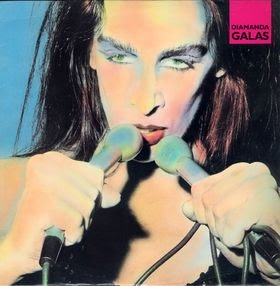 Her second record (1984), self-titled, appeared on Metalanguage, the SF-based label that was also early home to Henry Kaiser & ROVA. It's more controlled in many ways and features more electronic processing, splitting of her voice via multiple mics and overlays. Two side-long works, "Panoptikon" and "Tragouthia Apo to Aima Exoun Fonos", the latter her first foray into Greek, I believe. Excellent record, maybe the least known of her good work? The outrage seethes but remains just below eruption level, very tense, the odd spatter of molten lead burning one's cheek. 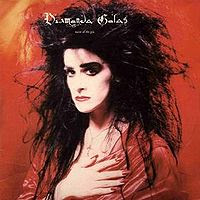 I somehow missed her third album (Divine Punishment). This one I didn't have a strong memory of--never liked the cover, maybe that's it. She begins with the co-option of that spooky organ music you hear in every other crappy Gothic film (Berlioz, right?). But again, it hold up pretty well. Five pieces, a step towards song-form from the previous efforts, some of her effectively dark pianistics and spat vocals on cuts like 'Artemis'. And "Cris d'Aveugle" ain't bad either--bitter, bitter, bitter, with those lamma lamma sabacthani's, as corny as they sound on one level, still capable of producing a chill. Great mix of crone cries, innocent babe plaints, deep-throated sibyls and, for all I know, norns (look it up). I have to say, this play-through is turning out to be far more rewarding than I expected.... 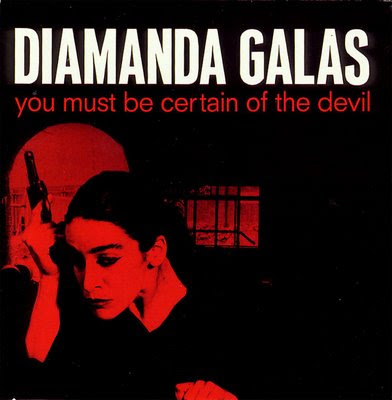 This one, the last vinyl I have of Galas (another 12" 45rpm), has always been a small favorite of mine, if only because of the presence of the single most powerful, most ruthless AIDS-related song I've ever heard, "Let's Not Chat About Despair". Worth quoting the lyrics in full, I think:


She has a band here and her direction is clearly rock-ward. Chilly rendition of "Let My People Go":

O Lord Jesus, do you think I've served my time?
The eight legs of the devil are crawling up my spine.

I kept up with Galas for a good while, though the recordings became somewhat less focused. She moved towards blues, which I largely enjoyed but didn't need to hear so often.

I saw her Plague Mass at St John the Divine in 1991, I guess. Quite the event. A full (very large) church, Galas took the stage in a topless evening gown, drenched in stage blood, put microphones to mouth and intoned, "Give me sodomy or give me death!".

A year or two ago, I received a rare live review assignment to cover her on the West Side at the Highline Ballroom, a swankish little night club. I wrote it up for Bagatellen (here) "Gloomy Monday" has stayed with me, I must say.
Posted by Brian Olewnick at 8/01/2009 09:38:00 AM

Galas was broadcast on the New Music America concerts in 1980, which made it to Ohio on the local public radio station. These late night broadcasts were my first exposure to her, Laurie Anderson, and many others who went on to become major artists in the following decade. Galas played the Tragouthia from the ML album. As with many other artists, I never caught the same chill on repeated listenings, although the night I sat in the dark listening to the Plague Mass CD was pretty memorable.