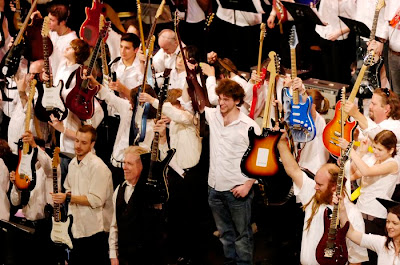 So, I went over to Damrosch Park, Lincoln Center last evening. A free, outdoor show scheduled to begin at 7PM, the main draw (for me) being a performance of Rhys Chatham's "A Crimson Grail" for 200 electric guitars, 16 basses and sock cymbal. I wasn't expecting anything fantastic; as much as I loved the Guitar Trio box last year--still do--my general take is that when guys like Chatham or Branca expand their palette to a gargantuan degree, muddiness sets in, in concept as much as sound.

The organizers of the event were clueless in several regards. I arrived quite early, around 5PM, armed with a book (Junot Diaz, Oscar Wao, which I had been resisting for a while but succumbed), food and water, scheduled to meet Carol around 6:30 at a designated spot (me, cell-less, having to revert to prehistoric methods of encounter). Of course, they weren't allowing people into the seats, which would have been simple and non-disruptive, so a couple hundred of us clustered around the entrance. At about 6, we were told, "Oh, the line is going to be around the other side of the park." Like they'd never done one of these events before. Not that it ended up mattering, but it's a little annoying being ushered from right at the entrance to about 600th on line. Still, fine, it was amusing though to listen to the bitching and moaning around me, much of it from a prominent local film critic who shall remain nameless....

But we got in and actually secured a couple of seats pretty much in the center of the audience area. The guitar seating was on three sides of the venue, ground level, front, left and right. There were four canopied podia, from which the conductors (David Daniell, Ned Sublette--fun to see him--, Jon King and one other I forget)would control their sections, they themselves taking cues from Chatham who, with the sock cymbal player (essentially a metronome) was on stage.

First up, though, was the Asphalt Orchestra. I was wondering what the deal was as no mics were on-stage, but the 15 or so piece band marched in along one of the side aisles, playing a rousing little number a la Dirty Dozen Brass Band and formed a line in the front. Ground level, with no mics, in front of 1000+ people. So maybe the first two rows could hear them clearly. Again, great planning. They did two pieces, departed and I bet half they crowd barely knew they were there.

OK, the Chatham. As a composition, it was severely clunky, lurching from one section to the next with little sense of any organic whole. It began very nicely with a controlled hum that expanded into a rich drone, the sounds gently flowing back and forth over the space, lovely effect. The next section also began intriguingly, a 16-note pattern that was also meted out to the four sections, I think four notes each but slightly irregularly, so the sequence softly ricocheted from one quarter to another, the initial bare bones "melody" being added to little by little with flourishes and fanfares. That was fine, but it went on way too long, the sock cymbal's relentless beat becoming very wearying and the essential elements of the section not all that fascinating to hold up for that long (20 minutes?)

The cymbal and the parts for the basses were two of the aspects that tended to drag down much of the music that night, lending a concrete-bound quality to music that should have soared. I understand there's a practical reason to have a timekeeping function for an ensemble that large but I don't think that was the answer (maybe, reduce the ensemble? Obviously....but no, can't do that...)

It was in two parts (Chatham said three but I couldn't distinguish the latter) and each ended with a kind of rave-up, the volume and pace increasing. They were the highlights of the set, but: 1) It wasn't anywhere near as loud as it needed to be. I don't know if they were under neighborhood restrictions (though I was told that only amps below a certain power level could be used--the guitarists brought their own) but these portions just begged for increased volume. and 2) This was odd--the first such section bore a striking resemblance to parts of the title track from Branca's "The Ascension". I mean, if I walked in at that point, otherwise unaware, that's what I would've thought was being played. And the finale, otherwise the work's highpoint, sounded as though explicitly derived from the same album's, "The Spectacular Commodity". How strange to have such overt (if subconscious?) references to music done in more or less the same vein almost 30 years ago. I gave Chatham perverse credit, though, for writing a central "melody" that was simply a C-Major scale. [edit: Maybe he's been listening to Taku :-)]

So, all in all, it was an underwhelming experience. As with Branca, in my experience Chatham's music works better the more pared down it is (including his two gong piece). Given overly abundant resources, things tend to billow out into conceptual murkiness and flaccitude (!).

Great conversation and Haitian food with Carol and Rick afterward, though! Made the evening more than worthwhile.
Posted by Brian Olewnick at 8/09/2009 10:07:00 AM

Despite your mostly "meh" reaction, I still would have loved to have been at this performance, but I'm stuck in DC producing NPR's online coverage of the Newport Jazz Festival.

I had been wanting to see Crimson Grail for a few years after hearing the CD, it was announced last year as a free concert... I traveled to NYC just for the show... and it rained. Such a disappointment.

Don't get me wrong, the crowd seemed to love it, by and large. I just wasn't so transported. The three people I ran into who I knew and who have some working knowledge of the area pretty much agreed with my take, I think, though I'll let them chime in here if they so choose.

Seth Olinsky from Akron/Family was the other conductor.

thanks for the report, brian. i think i trust your opinions enough to feel glad i didn't go. i'm not a huge chatham fan (though yeah, like you i of course dig "guitar trio," arguably the one interesting thing he's done, and milked, in his career), and he lost major points with me for an artforum piece on arthur russell that ended up being all about chatham himself (really really classless move - it's reprinted here: http://fromclosertonear.blogspot.com/2009/05/rhys-chatham-and-christian-wolff-on.html), but i still sort of worried i was missing a MAJOR EVENT (if you share certain facebook friends with me, you may understand).

Hey Jesse, thanks for that link--hadn't seen the article before. Yes, a bit disquieting.

I'm sure I was in the minority as far as not having a "once in a lifetime event" reaction to the work. As you said, the fb comments I've seen have been overwhelming positive, if not ecstatic. Dunno, maybe I'm missing something. But I don't think so.

Curious to read Steve Smith's review, assuming it appears tomorrow in the NYT. I didn't get a chance to talk with him after the show, but could see him five or six rows in front of me and had the impression he was digging it.

i'm watching a few youtube clips now and it seems cooler than i expected, though obviously skipping around and jumping to the climax doesn't really capture the feel of sitting there for an hour plus. curious to see some reviews. .. i'm sure it was fun to play in.

As one of the 200 guitarists I can tell you that we were in fact under noise restrictions. We were not allowed to go above 102 decibels. The entire soundcheck was observed by a guy from the NYC Parks Dep't who sat there with a decibel meter checking that we did not go above 102 db. We were apparently no more than 90-95 db for what we played during soundcheck, which was the quietest parts.

I can also tell you that we were much louder for last year's scheduled performance. We were on average at 112 db last summer during the soundcheck before the rain came.

During rehearsals and soundcheck on the day of the show we spent roughly 4 hours combined checking levels to insure we did not go above our alloted sound levels. I for one wish we had been louder.

It was a special experience and am very grateful I was able to be part of it.

Thanks for the clarification.

Dunno, it reads more descriptive than qualitative to me.

10,000 people? I heard a couple of mentions that the seating capacity was only 1,000 in the park but maybe.

I've always found Branca and Chatham rhythmically challenged - they have no idea about anything outside a bare understanding of four / four even though very complicated things can be done within four. Simple things in four can also be very enjoyable. Yet they've never demonstrated any awareness of that in my mind. Branca and Chatham, yes all in all about textures and the high hype of "overtones," but frankly Keith Rowe, Derek Baily, Jimi Hendrix, Fred Frith, Elliot Sharp, Davey Williams etc...and yes even Sonic Youth (even though they say they learned their tricks from Branca), my bloody valentine, most definitely steve cropper, many punk bands and many others probably have done much more to move and explore what guitars can actually do then the two of them combined- I'll have to say I've always found them both pretty week in compositionally, maybe a little better in theory and volume - don't believe the hype. I finally had to say it in print.

I take your point. While when push comes to shove, I'll obviously take Rowe over these folk, I still have room for their best work. With Branca, I can't say I've followed him at all since Symphony's # 8 & 10, which I liked. I just had the impression that subsequent work was treading water and/or overblown. That said, "The Ascension" remains my favorite of his. I was wondering how I'd feel if I came across that today for the first time. In 1981 or so, it sounded vital and I retain that impression, if only via nostalgia.

I take your point as well about the rhythm though as such, it normally doesn't bug me in Branca, even though I always found Wischerth's drumming to be pretty leaden. In the Chatham show the other night, it wore thin, not just in the sock cymbal but overall. Not sure it's possible to get 200 guitars to sound as rhythmically crisp as five or six, not sure it's wise to try.