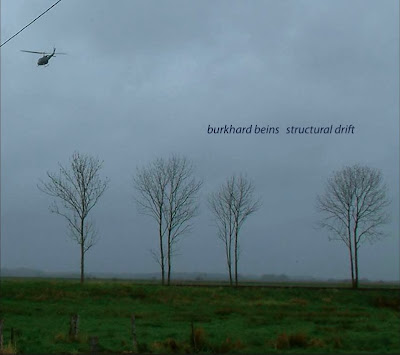 Three works conceived during a residency at Künstlerhäuser Worpswede, solo but constructed from more than just percussive sources, including electronics. One of the qualities in Beins' music that I love is a kind of earthiness, a fine grit that has often been a key factor in keeping certain group performances from sliding into blandness as well as having the capability of forming a magnificent edifice on its own (Rowe/Beins). That's not entirely absent here, but I found myself having to accommodate a slightly different Beins, which turns out to be a good thing. The first track is more or less drone-centered (ebow in prominent usage, I assume), with a repeating pulse. I feel a kind of distance here, the sort of thing you pick up sometimes in recordings of installation pieces. A soft rumble underneath keeps matters on a rough enough keel and, after its 15 minutes, I do feel a sense of satisfaction, but I think I'd get vastly more out of it live, able to be more thoroughly enveloped.

The second drift, however, is something of a marvel. At the very beginning, we seem to have simply moved a step or two sideways, the ebow hum replaced by a more pointed organ-synth tone, the rumble by a harsher rattle. That synth sound is the first of two referents that struck me (intended by Beins or otherwise): the analog type of tones generated by Terry Riley in his Poppy Nogood days. I absolutely love that "flickering" effect where the tone shifts sound as though they're produced by some manual operation like flipping open and shut a gate; I could listen to that for hours. Very soon, darker rumblings and loose metal crashes intrude and we find ourselves in an entirely different landscape from the first piece and an extremely unusual and fascinating one. Sirens come and go, fire and rain arrive. Beins reverts briefly to the opening set of sounds before introducing the other element that strikes me as allusive (about 15 minutes into the 20-minute work), a three note, high chimes sequence recalling phrases in music like Feldman's "Why Patterns?". The effect is beautiful and eerie, that original synth tone subtly increasing in stridency, the clicks beneath seeming a bit more desperate. He carries that through to the conclusion, lingering in this lovely, alien field. Wonderful piece.

The final, brief drift is finely concentrated, a propeller sound blending disparate chunks into a lumpy whole before dropping out entirely in favor of high electronic flittings, a succinct bookend.

Well worth hearing. Should be available stateside soon via erstdist More info here 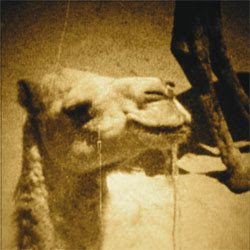 As it happens, another solo percussion release graced my quarters around the same time as the Beins, though this is a very different affair. Among other things, it's a 45rpm, 7" (bright red) vinyl offering. The brevity of the two pieces presented (6 1/2 and 4 1/2 minutes) might work against it, I think; I would have preferred to hear each piece at much greater length. But these seem to have been prepared as focused investigations of carefully limned sound worlds, sticking to one area, seeing what can be gleaned. "Skyscraping" appears to be all metal-driven, a shimmering cloud of malleted, rubbed or bowed cymbals and gongs. It's not, generally speaking, an area that hasn't been visited many a time, but Wolfarth approaches it with care and an appreciation for the overall structure of the work that makes things cohere very well. Thinking it over, maybe 6 1/2 minutes is an appropriate time span, not allowing things to billow out of hand, letting the listener grasp the entire shape of the work. This is the kind of piece where it's all too easy to listen once and think, "OK, I've heard this sort of thing before" and miss out on the subtleties, the lovely ebb and flow, the sensuality of the tones. It grew on my each time I played it (especially at volume); good work. "Zirr" is a different animal entirely, rambunctious snares in an off-kilter, quasi-martial state of excitement with ringing cymbals underneath, a frantic, nervous piece. An interesting slice, though one with less inherent appeal to this listener than the previous work. As this release is "vol. 1", we'll presumably be hearing other episodes from Wolfarth's investigations in upcoming months. I'm curious.

Available via metamkine or maybe through Christian himself
Posted by Brian Olewnick at 8/08/2009 08:43:00 AM

"The second drift, however, is something of a marvel"

Agreed here Brian, that is easily the standout piece on the Beins disc, which I was generally quite impressed by.

The Wolfarth 7" isn't available directly from Christian by the way, he recommends buying from Metamkine.

The effect is beautiful and eerie, that original synth tone subtly increasing in stridency, the clicks beneath seeming a bit more desperate. He carries that through to the conclusion, lingering in this lovely, alien field. Wonderful piece.