I'm not sure if this was the first record of Balinese music I heard, but it's one of them. Actually, my first encounter with a piece of gamelan music was via the amazing Nonesuch sampler double LP, my initial exposure to all sorts of music from outside the US/Britain ambit.

This stuff is simply spectacular. Timeless, endlessly beautiful, heartbreaking even. One of my all-time favorite recordings though I'm entirely ill-equipped to say much of anything about it. I'm sure I'd have a gamelan expert saying that this ensemble, a quartet incidentally, was nothing special, a commercial gloss on the real thing. Whatever, do check it out. It's available as part of the ongoing CD-issue of Nonesuch material, with a new cover: 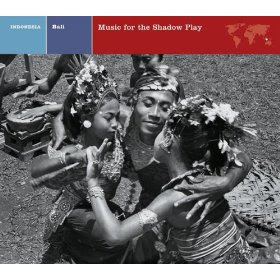 For some reason, I have that filed under "Gamelan". The names are given for the four members but there's no group name, no implied "leader". I put on the next one just now, The Ganelin Trio's "Ttaango....in Nickelsdorf" (Leo, 1986) and, while it's ok of its kind (an extension of the Taylor/Lyons/Murray trio, I might say) it's the sort of thing I have a tough time revisiting; I'd rather hear Cecil.

btw I think that cover photo is by Cartier-Bresson.