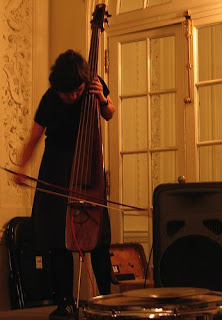 Yet another new-ish (to me) space in Brooklyn, Grace Space, alongside the elevated J line, hosted an event last evening, three sets, all problematic in one way or another but all at least somewhat intriguing. The room is pretty nice and spacious, though there's a bar to the rear which engenders typical bar noise and patter, if that's a bother to some.

First up was the trio of Barry Weisblat (electronics), Andrew Lafkas (bass) and Gil Arnó [he also goes by the moniker mpld] on slide projectors. The first ten minutes or so worked fine, Weisblat in a more steady-state mode than I've usually heard him, but as is often the case, they went on too long, the set dissipating as they did so. Arnó, I figured by watching and learned more later talking with him, uses found slides, seeking affinities between them, projecting two or more simultaneously (overlapping), blurring and employing various flicker speeds. He also contact mics the projectors and feeds their sounds (as well as room sounds and those of his comrades) into a computer, processing them. I didn't pick up much sense of conceptual integration with his co-players but had the feeling that I'd enjoy his work in a solo context (which he does) much more. There's something there, curious to hear/see more.

Next was Tandem Electrics (Richard Kamerman & Reed Evan Rosenberg, electronics) with Bryan Eubanks (open circuit electronics). They put up a solid show, again more steady state than I expected, the first 20 minutes especially strong with fine textures, repeated (mechanical or digital) sounds emerging and disappearing, very engaging. The second half wavered somewhat, though it contained several luscious moments as well. The "problem" for me, such as it is, is that this sort of full-on, semi-drone-y attack almost guarantees a certain level of "success", similar to (although not necessarily in sound) the way Gunter Muller and company, in recent years, often approach a show, generating a nice, thick matrix and elaborating on it. Nothing wrong with that and, of course, it can sometimes result in great music, but I also think it can be something of a safety net. When I saw Richard a couple months ago with Dave Barnes, the music was more fragmented (not extremely so, but more), riskier re: the possibility of "failure" and ultimately more exciting. It's a risk/reward thing, maybe. So the set last night was fine, very enjoyable, but at the same time I wanted....a higher degree of difficulty.

Lastly was the duo of Mattin and Margarida Garcia. Margarida began by herself in, to me, a surprisingly rockish, even heavy metal-redolent style, doing a series of hums followed by strong, tonal strums of her bass thingy that immediately brought old Black Sabbath to mind. She did blocks of attacks punctuated by near silences. When she took the bow to the bass, she summoned forth amazingly evocative echoes of portions of Hendrix' "Star Spangled Banner" and other guitar freak-outs. Not sure if this was intended, but...These portions were a little odd; interesting in a way but kinda...non-nutritional. Better were the between moments when she subtly manipulated some humming tones by applying pressure near the bridge--that was really nice. She played for some 20 minutes, said "Thank you" and that was that. Mattin's contribution to the set was listening as a member of the audience.

For myself, there was a little bit more since, as it happened, I didn't notice him sitting there. So there was an element of tension for me, waiting for his arrival on stage. I was half-anticipating a blood-curdling scream coming from a few feet behind me, for instance. But, no.

"Los detectives saljaves". Excellent choice, Brian. Bolaño is one of my favourite authors. If you like it, you should try his masterpiece "2666", a 1100 pagel novel he finished just before his death in 2003.

Hi Javier. I'm about 200 pages in, enjoying his writing style very much, having less luck with his narrative so far. The characters, while evoking a smidgen of sympathy here and there, tend to strike me as more annoying than anything else though, for all I know, it's an accurate depiction of would-be avant poets in the 70s in Mexico. (It would be interesting for Bolano to provide more samples) A little heavy on the day-to-day trivia, who's sleeping with who, who's a friend of who, etc. though perhaps that's his point. Still a ways to go (400+ pages), but I'm hoping for more ideas and/or poetry....

Seriously, he seems to be a good one. I steered someone else over there as well.

I'm afraid my own layoff may linger for a while...

You're right, Brian. His narrative is a bit difficult, sometimes a little messy. I would say he writes in an "unfiltered way", writing as it comes from his mind. But it works, at least in Spanish. I don't know in English. It's his style, and you'll find it in most of his books. Hoping for poetry? Wrong place, Brian.

In a certain way, he reminds me Elfriede Jelinek. She also writes "unfiltered", but her narrative is more poetic.

Finished the Bolano yesterday. I enjoyed it pretty well--I found it much more engrossing after the point when I wrote earlier, as the "entries" grew longer and less sketchy. Several of the (the Paz story and the Angolan tale, eg) were fantastic pieces in and of themselves. He's a strong writer. My qualm, and it's an admittedly old-fashioned one, is that I never developed much empathy for any of the characters; I get the sense that Bolano wanted you to have such but they struck me as more annoying and self-involved than anything else. The ratio of talk about who was slept with (or how) or what was smoked or drunk versus discussion of aesthetics (or other matters of interest) was way high.

Perhaps that's one of his points--to illustrate a history of a would-be avant poetry movement that left nary a trace, instead devolving into routine banality. I would have liked to have read examples of the work in question...That's always an issue when you're doing a fictional recreation of some modern art movement. If, say, in a movie about a fictional contemporary visual artist, if you actually show some work, you run the extreme risk of it coming across (accurately) as banal, sub-standard stuff, which you see all the time in crappy film.

Overall, it makes me only mildly interested in 2666, though I imagine I'll get around to it eventually.