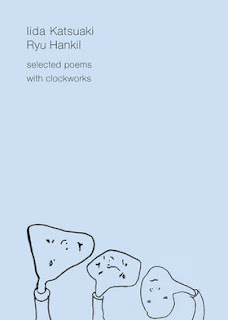 Operating at a huge disadvantage here, as I don't understand Japanese (the enclosed booklet does provide translations), but I do like what I hear. Katsuaki speaks his works in relative deadpan and, for the first several out of the 20 shortish tracks, the result is rather nondescript. But things pick up almost imperceptibly, Hankil's mechanical rhythms and whirs becoming more and more aggressive, several of the pieces achieving an exquisite balance between the voice and clockwork devices. Good, unusual recording, even if I get the feeling I'd like it less were the words spoken in English.

I've given up trying to understand what Müller and company have been on about the last few years. Here we have more of the same, richly textured, yes but maybe overly so in a sickly sweet sense, almost always weighted down with vacuous beats and throbs. I imagine that if you were wandering around nearby one of the six events from which the tracks here were excerpted (that's another thing--excerpts?) and had some interest in what passes for experimental rock these days (or, better, of a Laswellian persuasion), you might be intrigued enough to pop in. If that's the motivation, fine, I guess. But for those of us who thought Müller, earlier in the decade, was one of the strongest, most vital creators out there, recordings like this one are a bitter pill.

Though by no means great, this offering has far more going for it, if only because it surprises a fair amount. Cobbled together by Harth from duo recordings he'd done with Muller and Irmler (of Faust), there's much greater breadth of sounds (including breathy saxophonics), interesting match-up of sonic blocks, etc. and best of all, no leaden beats! There are some loopy, overly spacey moments, yes, but it's pretty listenable throughout and solid at its best.

What's an example of non-vacuous beats and throbs?

Well, there must be some (non-vacuous throbbing beats). It's an interesting question, actually, when it comes to repetitive rhythms. I was thinking about it recently when playing the Johnny Dyani tracks, both with regard to him and Abdullah Ibrahim. It comes down to a personal thing to a great extent, clearly, but there are some rhythmic lines they use--and repeat indefinitely--that I could listen to forever. I find something inherently gorgeous, deep, what-have-you about them, causing them to somehow sound fresh on each go-round. The line from "The Pilgrim" from the Ibrahim/Dyani record, "Good News from Africa, is a shining example. otoh, there are throbbing beats that I hear one time and desire intensely that they stop, which they generally don't. You (I) seem to hear all there is on first go and it's like someone standing in front of you, repeating the same vacuous phrase over and over.

re: Rowe's covers...I've always loved the one for "Rabbit Run" (more than I like the record, actually). Both formally (with the wonderful cut-offs) and, more importantly, for the sly subject matter, the Old World/New World, US/Europe juxtaposition.

"I've always loved the one for "Rabbit Run" (more than I like the record, actually). Both formally (with the wonderful cut-offs) and, more importantly, for the sly subject matter, the Old World/New World, US/Europe juxtaposition."

FWIW, the actual painted cover (which Brian has seen) has a much deeper yellow bottom half and (of course) no letters.

this is pretty hard for me to pick (not that anyone asked), but as far as non-Erst covers go, I do like the egg farm one on 'From a Strange Place' and the four covers of 'Fine', 'Harsh' too.

Since no-one asked I'll also chime in on Rowe covers. Like Jon 'From a Strange Place' has long been a favorite Rowe cover, you can see ancient posts on IHM "best album cover" threads where I stuck that one in. For Ersts though, its EL005, especially the actual physical object (which I suppose is no fair, but since the covers are all originally paintings you can think of the albums as prints and just like with all other prints, the original is better).

On the topic at hand, I'm somewhat amazed you are still giving Müller discs a shot. I think I've only bought one of his discs in the last two years and that was only because it was all collabs with the Korean guys (Signal to Noise vol. 6). It is indeed a bitter pill - you can find another ancient post where I say something like "Müller can do no wrong".

yeah, the actual 4g one is great too, that one didn't print very well.

Robert, next time you're in NYC, I've got more for you to check out, the two for The Room (inside/outside), the Sight-related one, and I should be getting the one for the Sachiko duo in the next month or two. I think my collection is up to 14 now.

'Glad you gave this a listen and decent review...I think it IS great;blah,blah blah.