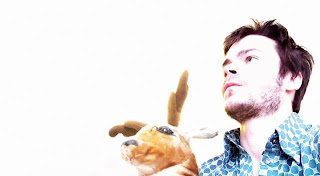 I hadn't realized this was a live (solo) performance until after I'd listened a couple of times, which both surprised and impressed me. Meursault has a lot of stuff going on but, to his credit, it never feels crowded, the various textures and sounds playing very well together (like the combination of scraped tones and faunal-sounding "whoops" some 15 minutes in. I take it there are a number of off-kilter mechanical devices set in motion throughout, but however it's accomplished, the matrix that emerges is very alive and both busy and spacious simultaneously. Think a less caloric Jason Lescalleet. Fine recording, growing on me each listen. 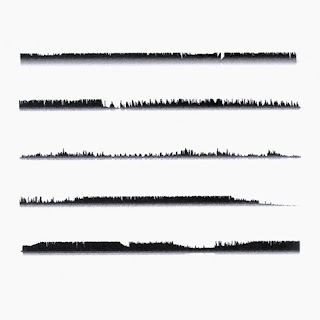 True to its title, Phroq (Francisco Meirino) apparently attempted to create this music only when he was in dire need of sleep. Well, it does have a disjointed character though whether that can be laid on the doorstep of fatigue or otherwise, I can't say. There are some very nice moments, especially when things subside, but there are also too many spacey sections for my taste and the structure, as mentioned, strikes me as too scattered. One's near-sleep sensations may be kind of like the re-telling of dreams: interesting to the teller, for whom the logic retains some vestige of narrative sense, not necessarily to the hearer. 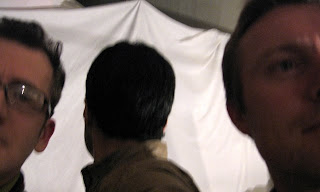 A split 10", 45 rpm vinyl. Haptic (pictured above--Joseph Mills, Adam Sonderberg, Steven Hess) contribute dark, strong work ("Velocimane"), structured in long waves of bowed metals and electronics (prepared piano as well, I think?) that develops a fine, brooding feel; very cinematic, in a way. My only complaint is that it feels like a slab lopped off from a larger work. Everything about it screams for greater length and more delving. Exceedingly cruel to slice it off so abruptly! :-)

Cristal (pictured below--Jimmy Anthony, Greg Darden, Bobby Donne) offers a shorter (four minutes or so), less satisfying piece. Its harsh, metallic wash struck me not as inherently intriguing than Haptic's fragment but still, it expires before one can make much of anything of it. I give the benefit of the doubt that both are intentional one way or the other, perhaps intentionally providing a mere sliver of what implied larger works and are interesting if so viewed. Still, I wanted more... 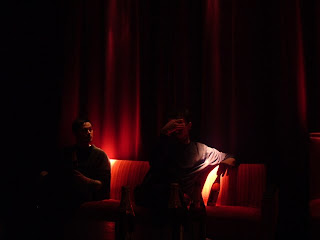 Thanks, Brian. A full-length Haptic CD
is forthcoming.