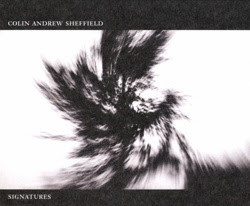 Al Jones mentioned this recording to me a little while back as one of his favorites of the year and subsequently wrote it up for bagatellen. I imagine one's reaction to it will in large part rest on one's appreciation not only of drone-oriented music, but also of that subsection which is fairly tonal, even luxurious in nature. I find it pretty fascinating even apart from those considerations.

The label appears to involve an orientation around bird song and such sound comprise one element here but Sheffield also incorporates short (obscured, stretched and otherwise manhandled) snatches of existent music, field recordings (including, I take it, birds though if so I couldn't pick it up--the release of this recording was timed to coincide with the 100th birthday anniversary of Messiaen, btw), vinyl scratches and probably much else. He makes a point to mention his non-use of software in his assembling process, preferring a turntable, an old sampler and a multi-track recording system. Whatever the technical means of construction, the four tracks share a similar character: a thick, twining strand of organ-like tones that gradually cede evidence of a huge amount of activity occurring under the surface and, surprisingly within a drone context, much of that activity is rhythmically based.

There are four pieces, two lengthier ones bracketing two of relatively short duration. The first, "Beneath the Waves" (true, his titles can be...awkward) has, I don't know, five or six (more?) lines occurring and each seems to possess its own muffled rhythm. Throbs or pulses, more accurately but somewhat akin to "Music for Airports", they flow along at their own tempi, creating lovely and subtle sonic moire patterns. Sheffield brings given elements to the fore but the listener can also isolate components, often coming to hear certain sounds only late in the work, though they've been there all along. The music can teeter a bit close to the overly gauzy but always maintains enough grit to steer clear. The two shorter pieces are more aggressive, even harsh, reminding me a bit of a toned-down version of the loud track from Rowe/Nakamura's "between".

As is often the case with work tangentially similar to this, though I find it lovely to listen to on disc, I think it might be much better served in a live setting, in an appropriately immersive environment, preferably a non-concert oriented situation, one through which the audience could wander, sit, etc.

Good stuff. Well worth the listen if the general area is up your alley.