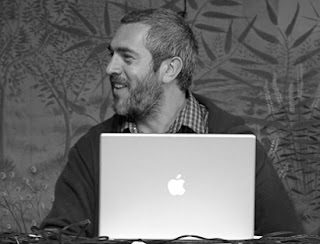 I first encountered Richard Garet's work earlier this year in a performance he shared with Asher and Brendan Murray at Issue Project Room, one of the most enjoyable events of the year and one of my favorite music/video concerts in recent memory. His music, at least that which I've heard there and since, fits it with that part of the scene which concerns itself with a melding of field recordings and electronics. There's something inherently different, imho, about it compared with post-AMM improvisation, though it occasionally overlaps (from both directions). One, obviously, is that the recorded work is largely constructed in the studio, not created in real time and even in live performance (I think it's fair to say), many of the elements have been pre-recorded and there's likely to be somewhat more of a sense of foreordained structure, even as aspects might be altered on the fly. These are all generalizations, of course, but when I hear music from Garet, Asher, Christopher McFall and others, they seem to me to occupy a distinct area of the sound-world, at least an area that is easily differentiated from Rowe, Sachiko, etc. I think one part is more of a willingness to watch a process unfurl, to set something in motion and leave it be for an extended period. Even with work like Sachiko's extreme sine pieces, I get the sense that she's hovering intently all the time; there's a huge tension at play re: the possibility of something happening even if "nothing" does. I've only used this referent a few hundred times before, but musicians like Garet strike me as stemming more from an Eno-esque aesthetic, as first appeared in "Discreet Music" and similar work, where the creator is quite content to begin a process and then offer perhaps only a nudge here and there, sharing a listening stance with the audience, just as fascinated by what might happen next.

Again, this is a necessarily gross generalization and there are doubtless as many variants to this approach as there are musicians so engaged. Also, I'm sure many pieces that I hear this way would turn out to have been enormously worked on. Indeed, the two recordings by Garet considered here each take different tacks. 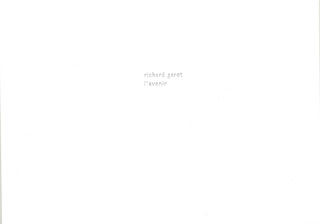 "l'avenir" embodies the more minimalist attack of this aesthetic. It's overall arc is clear, it's of a piece, it stays on roughly a single track throughout, presenting its beauty and depth and then disappears down the road. It begins with soft crackles (as with much of the sound here, I'm hesitant to guess at the original source as I've no idea how much, if at all, it's been modified, so bear that in mind) that evoke dripping water and light static. This sonic area appears throughout, that is, "natural" sounds of a lightly percussive aspect. But, as is the case elsewhere I think, there are often three or four layers of such, presenting the listener with likely more depth than can be perceived at a given time, something that makes each listen fresh. Shortly, long, tonal organ-like sounds appear. They have a slightly distant feel, as if heard through a fog, and comprise the other principal aural element. These elements fluctuate through the remainder of the piece, varying somewhat, generally together, occasionally with one advancing, the other receding. The image I get is of a dark, cool night, on the edge of an industrial area of a town, little or no traffic, steam on one's breath. Very satisfying. 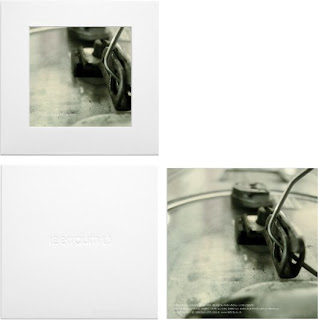 When I first put this disc in my player, it came up as unreadable. Well, this happens from time to time with small labels, doesn't it? Happily, I'd also been sent what was labeled a "stereo version" of the same piece, so I listened to that. While doing so, I found myself thinking: This sounds more like a piece I'd expect to hear accompanied by video. There are more shifts of focus and texture that I was mentally imagining alongside similar changes in visual fields, abstract or realistic. Eventually, I realized that the original leerraum disc was in fact a DVD (no mention of such on the sleeve!). Ah, ok, I thought, let's see about my intuition. Wll, the joke was on me as the visual side of the DVD is a black screen. Its intent is for reproduction on a 4-channel and/or 5.1 sound system, which I lack. Hence the inclusion of the stereo version.....

Although some of the elements reappear, it's more aggressive than "l'avenir" in addition to being more episodic. The hissing crackles and near-sine tones recur but the former are often rougher, more awkward, elbowing their way in instead of emerging gradually. It's not violent by any means, far from it. Just more like 6AM on the same cold morning instead of 3AM, a greater number of incidents occurring. The hums are more insistent, maybe a bit threatening; some of the previously light static has turned rumbling. The shifting implies a more active hand on the part of Garet, bringing this closer to, say, what Jason Lescalleet might accomplish on a very subdued night. At the conclusion, there's no diminution, just a sharp cut. Again, very attractive, thought-provoking work, well worth checking out.

Just more like 6AM on the same cold morning instead of 3AM, a greater number of incidents occurring.

Nicely stated, I've added Garet to my short list for 2009 listening. I am into the other two on that bill.

Richard Garet I think that you blog is reallu good!!22dd