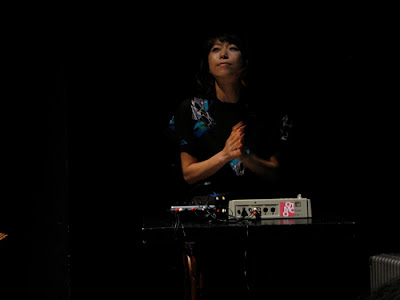 Since I spend a sizable portion of my time at home listening to recorded music, I should jump at the opportunity to leave the house and do so, yes? Well, sometimes the circumstances demand it. This was the third occasion that Jon Abbey had, so to speak, donned DJ garb at Experimental Intermedia though I'd missed the previous two. Here, it was the promise of listening to the as yet unreleased Rowe/Sachiko 2-disc set that forced me out.

By reputation (and reality, as far as I'm aware), XI has the most amazing sound system of any arena that would allow musicians like Rowe through the entrance (though, oddly, he's never played there). As a good deal of this music deals in extremes of amplitude and level of detail, it's a near-perfect venue, especially if one has the ability to incorporate the inevitable horn blasts and bass throbs from the street below into whatever's happening inside. I arrived at the onset, the only member of the paying audience for a couple of hours (Niblock and companion pretty much staying in their living area, the sound guy in his cubbyhole, Jon and Yuko up front). Jon commenced with the erstlive Rowe/Beins disc. Now, I'd imagine that there's no recording from the last few years that I know more deeply, having listened to it (guessing) 40-50 times, easier to do, admittedly, with a 28-minute disc than one that lasts 1 1/4 hours. But on that system, hiked to a volume level that would insure instantaneous divorce at home, layer upon layer of detail was revealed. Pretty amazing. Such an intensely creative performance; part of me was remarking on how rarely--if ever--one encounters that level of sustained invention especially in such a "full-on" mode, the ol' controlled chaos. Such balance, going over the brink, reining it in, impossibly fortunate radio captures, etc.

This was followed by a lovely unreleased track from English (Joe Foster and Bonnie Jones), surprising in its use of very tonal hums through much of it; I'd love to hear it again and hope it sees the light of day sometime. Then, Will Guthrie's "Spear" which, as with Rowe/Beins, sounded mighty impressive amped way up, again revealing details hitherto unnoticed.

Next, Sachiko/Rowe. The double-CD will consist of three studio tracks and the live performance from September's Amplify festival in Tokyo, the latter sequenced second, each piece ranging from about 20 to 32 minutes, which is the order they were played yesterday. It's a lot to digest. I've come to think of Rowe's music in relation to painters--his Rothko style, for example, might be represented by the drone-oriented work he was prone to in the first half of this decade, his Twombly side represented, more recently, by the more isolated, scratchy sounds, with irregular blank space, the sounds tending toward a kind of willfully awkward brutalism (not awkward at all, in essence). This is the mode he most often operates in here. But one surprising thing, at least as I heard the mix, was that it was Sachiko who seemed to be steering things. Similar, in a way, to Duos for Doris, where Tilbury often charted the path, Rowe providing support and aura, it's Sachiko (again, at least to the extent I could differentiate, which I think I was able to more often than not) who sets the framework here. She uses sine tones in much of the first track--fascinating to hear Rowe try to find his way into this potentially impenetrable wall and, while the sine reappears from time to time, dwells mostly in contact mic territory, plosive eruptions abounding. In the last two pieces, you could easily hear a remarkable coherence developing, the extreme spareness of the first studio track and the live performance becoming somewhat mollified as conversation began to flow more "smoothly", though still sparingly. In fact, more than any painting reference, I found myself thinking of Beckett. This may be very close to an aural evocation of his more austere writing, even to the extent of certain repeated sounds (a two-tone contact mic interjection especially, that Sachiko returns to often) echoing text iterations in Beckett. Way too much to get my ears around in a single hearing, to be sure, but I was happy to have experienced it once in such surroundings.

Sandwiched between the 1st and 2nd and 3rd and 4th tracks were a fine collage piece (I think?) by Bhob Rainey and the loud cut from the Rowe/Nakamura 'between' set, both sounding great.

nice, Brian! glad you enjoyed it...

the Rainey track is a remix of a piece he put out on a 7 inch this year on Evolving Ear, the English track is due out in early 2009 as part of the first release on Bill Ashline's new Celadon label (a double CD, I believe).

the Ami/Toshi and new Keith solo both sounded really amazing (as did the climax of The Pilgrim, Phill went and got his db meter, which registered 105!), too bad you couldn't stick around for those, but thanks for making it out at all!

"XI has the most amazing sound system of any venue that would allow musicians like Rowe through the entrance (though, oddly, he's never played there)."

well, Phill is only allowed to host shows there three weeks a year, one in March and two in December, that's part of his lease-sharing agreement, as he's not in NYC most of the year.

and one funny thing about the Rowe/Beins piece is that despite you being the sole audience member for that yesterday, over 10 percent of the original audience was present (me, Yuko, Phill and his gal were all in Berlin at the original set, along with maybe 25 or 30 other people).

"Way too much to get my ears around in a single hearing, to be sure, but I was happy to have experienced it once in such surroundings."

yeah, just keep in mind that it wasn't mixed or mastered yet (although Unami has mixed it now and Toshi is working on the mastering, I only had the rough mixes), so it wasn't really the final product. I had both the high and low ends EQd up to try to increase the impact a bit, but I have no idea how accurate that will be when compared to the final result (not that we'll be playing that on Phill's system anyway, so something of a moot point, but still).

Thanks for the report Brian, wish I could have been there. I did listen to the entire thing via the stream which obviously compromised things a lot. However I definitely got stoked for the Ami/Toshi and Sachiko/Keith - probably the highlights of next year.

I sure'd like to catch something at XI sometime, maybe a trip to NYC is in order next year. Though of course not much will top this DJ set. I would like to hear some of Phill's stuff on his system though.