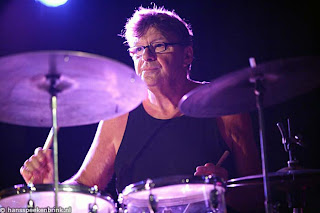 Speaking of solo percussion records...not sure how I came across this, maybe picked it up on our first trip to Europe (including Amsterdam) in 1983: Pierre Courbois, 'Independence' on Timeless Records. Again, no cover image I could find.

I'm not real familiar with Courbois otherwise but this one is actually OK if a bit "of its time" with regard to electronics usage. Doesn't have the conceptual rigor of Cooper's work but each piece is a self-contained idea, no flailing. He has a nice sense of musicality, a little Roach-ian. Ultimately forgettable, I guess, but not bad of its type. (!) 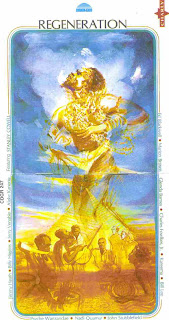 Now, you see, there's an album cover. When I pulled this out, I was trying to remember why it was still in my collection. When I purged all the rock, fusion and other stuff back in the mid 70s, I also included a lot of my more mainstream jazz albums, including a bunch of things on Strata East, among them Cowell's Piano Choir and (most unfortunately) several Music Inc. albums. I would've thought "Regeneration" would have been part of that exodus, but no. Playing it, I'm sure its saving grace has to to with an affinity to the kind of music Marion Brown and John Betsch were doing around the same time, albeit with a poppier edge. Brown's on the recording, in fact, along with Ed Blackwell, Billy Higgins, the late John Stubblefield, the fine percussionist Nadi Qamar, Jimmy Heath and Spike's dad, Bill Lee. Interesting mix of African, rural blues, avant jazz and soul-pop, relaxed and enjoyable.

For fun, I googled Psyche Wanzandae, who plays flute and harmonica here. His name always...intrigued me and I don't believe I've ever come across him otherwise. Well, he has a myspace page, laden with Egyptological nonsense. 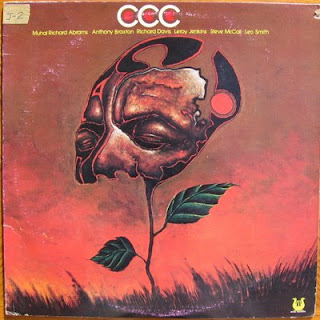 Really one of the great AACM recordings that rarely gets mentioned, this took place in NYC at the Washington Square Church on May 19, 1970 (released by Muse in 1975), a sextet of Jenkins, Braxton, Leo Smith, Muhal, Richard Davis and Steve McCall. Volume One is a single piece by Jenkins called "Muhal", with a gorgeous theme of long, oddly harmonized tones followed by inspired improv. Very reined in for the most part, great to hear Davis with these guys; his lead-in to the theme is a classic morsel. And that Jenkins lyricism.... (just realized it has to be Muhal playing cello on that theme). Ornette is listed as "recording supervisor".

Vol.2, form the same concert, consists of another album-length piece, "No More White Gloves", apparently another Jenkins piece (listed under his publishing on the disc label--sounds more Muhal-ish). This performance is more raucous in large part, perhaps not quite as strong but still vibrant and rather amazing for 1970; I'm not sure I heard better than this from the same musicians in the last half of the decade.

The covers were painted by one P. Givens, who's also responsible for the fine portrait of Rahsaan on the record I mentioned in the previous post, 'Natural Black Inventions: Root Strata' on Atlantic. Vol 1 is rather attractive, imho. Vol. 2 however, is certifiably in the running for Worst Jazz Album Cover Ever. Enjoy! 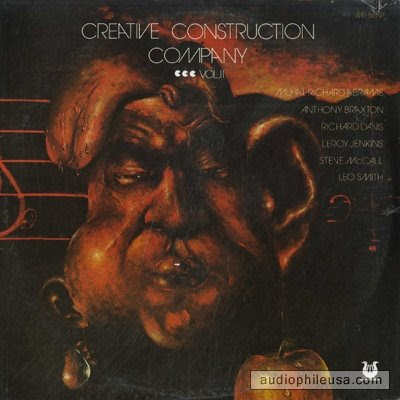 He either dyes it or it's a piece.