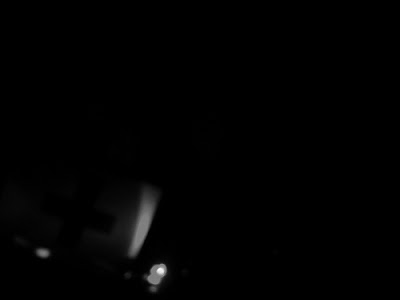 I go into music/video events with a certain amount of trepidation. For myself, the success rate has been fairly low, generally on the video part as I'm probably far more critical of visual art than of musical and, with regard to video, having seen my share since the art-form blossomed in the early 70s, a large percentage of what I've encountered has struck me as stale, shallow and gimmicky.

Last evening was a happy exception, a performance at Issue Project Room by Brendan Murray, Asher and Richard Garet. The show was presented in two halves, the first three duos by (in music/video order) Murray/Garet, Asher/Garet, Garet/Asher, the latter a sound performance by all three.

While the trio set was fine, a thick matrix of steady state sound ranging from tonal drones to noisier elements, it was the duos that I went home thinking about. I had little idea what to expect from Garet, though what I'd seen of his visual work seemed centered around geometric abstraction in luminous colors. What was presented last night showed a far wider field. The first video stemmed from a 16mm source, which film had been marked and painted in various ways then processed via computer onto a DVD then reprocessed live (if I have this all straight, which I might well not). The images had that "upward" movement betraying its celluloid source, all abstract splotches and lines, the colors varying quite a bit, tending toward combinations that might loosely be described as psychedelic (ie, chartreuse and purple). This isn't my favorite sub-genre of video but by virtue of sitting rather close, the image's large size (projected on a screen some 8 x 12 feet) and the reflection of same off the white walls to either side, I was able to lose myself in it without much difficulty, especially when the video blurred somewhat. I did find that the video overpowered Murray's music which was dark and brooding and likely fine on its own but I had trouble melding it with the images and ended up more watching than listening. (Balancing these senses, I find, can engender some difficulty and, obviously, may be more my problem than that of the performers).

Gears were drastically shifted for the second piece. I've long held the general view that, in music/video works, extreme abstract/concrete poles often serve the form well. That is, the more abstract the music, the more "realist" (in conventional terms) the video, and vice versa. Not always the case by any means (see the glorious Block/Encoder/Gibson DVD recently discussed) but more often than not. Here, the images were from black and white footage shot by Garet from a helicopter over a particularly raw and rugged stretch of glacial territory in Alaska. The camera never caught the horizon line, lending a delicious confusion between the brutal realism of the images and the abstract patterns they'd create; it was almost impossible to get a sense of scale, for instance, due to the fractal nature of the barren cliff-sides. Garet processed this film on the fly, contributing flickers (both "black" and "white", if I'm not mistaken) and a kind of horizontal smearing that evoked Richter. These effects didn't overly distort the image, rather imparting a dreamlike aspect to it, or one of a decaying memory. Beautifully done, in any case. Asher's music was softer, with subdued bell-like tones. As I've said in the past with regard to some of his work, I'm reminded of Eno circa "On Land" once in a while, and was so here, especially given the video. All to his benefit though, as this was richer and deeper. Garet's website, btw, can be found here

Still, it was the final work that really stuck with me. I hadn't heard Garet's music before and you can roughly place it (or at least what was played last night) in an area adjacent to Murray's and Asher's, that is, a rich steady-state zone where sound is constant though fluctuating. He sourced BART subways for one element and you could discern train rumblings in much of the piece; it was excellent work. The video by Asher was a piece from several years prior. It consisted of five or six "scenes", each lasting a few minutes, of an elevated highway shot from a fixed position camera, often on a divider mid-road. The views were beautifully composed, with something of a wide angle, recalling (to me) Rackstraw Downes' painting. They were shot, apparently, at either dusk or dawn in somewhat foggy weather (in b&w), the streets wet, the traffic occasional (It looked like could almost be part of the BQE, though there's never that little amount of traffic). The shots emphasized the wide sweep of the off-ramps and the different levels of the roadbeds. Headlights would appear fuzzily in the distance before arcing by. They had an everyday eeriness and calm beauty that would serve Lynch well, or even Tarr; I could've watched them for hours. Here, to a greater degree than with the prior offerings, the music and film meshed perfectly, each balancing the other, allowing one to experience them as a unity. One of the finest live sets I've encountered recently; love to see/hear on disc.

Our pleasure, Brian. Thanks for coming out.

Man, I was sorry I couldn't attend this when I saw the announcement on IHM. Your report confirms my regrets.