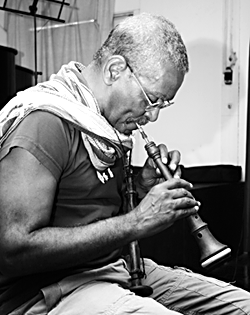 Among the handful of musical ideas developed by the jazz avant-garde of the 70s that had a direct bearing on my future appreciation of post-AMM improvisation, one was surely the solo percussion work of Jerome Cooper. I was familiar, of course, with his playing in the Revolutionary Ensemble and with Braxton on the latter's first Arista release (I still think Cooper and Steve McCall were the two most simpatico drummers to work with AB) but when I saw him do a solo performance at Environ, probably in 1977, it was a revelation. I'd already had ingrained a visceral dislike of percussionists who would surround themselves with 85 small hittable or shakable objects and, in the course of a given feature, utilize each and every one for several moments. Seemed an utter waste of time to me. So imagine my joy when Cooper played a solo piece lasting 1/2 hour or more for, say, bass drum, balaphone and sock cymbal or for saw and snare drum.

He'd "limit" himself to only two or three colors and wring awesome amounts of beautiful music from them, aided in large parts by the fascinating West African-derived rhythms he'd employ. It was a major breath of fresh air, in some deep ways not unlike the freshness I experienced with, for instance, Sachiko M's solo pieces.

"Root Assumptions" (what a great album title!) came out on Anima in 1982 (no cover image available, natch), though it was recorded in 1978--I'm wondering if it was in fact recorded at Environ; Peter Kuhn was the engineer and he did a good amount of recording work there. It's a 32 minute piece for balaphone (an antecedent to the marimba, made of bamboo), sock cymbal and bass drum. Endlessly inventive, intricately rhythmic, it's one of my very favorite pieces from that era.

A second solo recording was issued around 1980 by the small and excellent Boston-based About Time label (which also put out some of Threadgill's earliest work as leader), 'The Unpredictability of Predictability', recorded in 1979 at Verna Gillis' wonderful Soundscape loft in the West 50s. I believe I saw Cooper there, in fact, perhaps this performance.

The title suite, on side One, again isolates certain instruments for each part. The first uses flute, whistle, chiramia (a Mexican double reed), bass drum, sock cymbal; the second, drum set with mallets; the third, floor tom, bass drum, sock cymbal, voice. 'Bert the Cat', taking up side Two, adds the chiramia to the ensemble from the previous album and takes on something of a one-man band aspect. Reminds me a little of things like (the divine) 'Black Root' from Rahsaan's 'Natural Black Inventions: Root Strata', if not quite in the same league. Fun piece, if something more of a lark than the music on 'Root Assumptions', though it picks up quite a head of steam along the way.

In 1988, About Time released a quintet date of Cooper's from the previous year, the unfelicitously titled, 'Outer and Interactions'. The group is Vision-Festy before the fact, with Joseph Jarman, William Parker, Thurman Barker and Jason Hwang but the music came as a pleasant surprise, yet another fresh gust of wind in a time where I was already picking up how stultified the genre was becoming. The best pieces are extensions of Cooper's solo work, sometimes with him returning to minimal instrumentation in a group context. Cooper always had a light touch on drums, something that serves him well in a larger context, here with Barker occupying middle percussive ground; the whole group swings very trippingly (admittedly, something of a surprise in any band with Parker in tow). I don't recall this album garnering much press at all and it rarely comes up in discussions; if you're into this area at all, it's well worth checking out.

About ten years ago, we were invited to a birthday part for my childhood friend Cathy at someone's apartment on Prince Street in Soho. At one point, sitting around, I saw a guy from the rear, ambling toward the kitchen. "I'll be damned if that didn't look like Jerome Cooper", says I. I asked the hostess, "Are you by any chance acquainted with a fellow named Jerome Cooper?" Indeed she was and it was he. Had an lengthy, fairly enjoyable conversation with him up on the building's roof, enjoyable in the sense of recalling old stories from the Environ days. Cooper was somewhat spacey--I imagine the pot and drink circulating didn't help--; as 20 years earlier, he was an exceedingly pleasant individual but I had the sense the business hadn't treated him well, or possibly he it. I left thankful for his prior music but not really expecting much for the future. I notice he's been playing around a bit in the last couple of years, though I've not investigated.

But for his wonderful work with the Revolutionary Ensemble, Braxton and, especially, for his solo music: Thanks, Mr. Cooper.
Posted by Brian Olewnick at 8/16/2008 08:02:00 PM

After reading your writeup I picked up a copy of the Jerome's Root Assumptions at the Dusty Groove this afternoon. It is a good one. The recording offers a great soundstage for the instruments.

Cool, glad to serve a practical purpose once in a while.