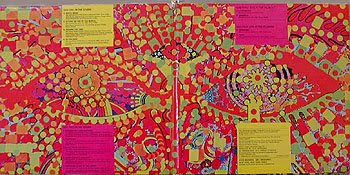 I haven't read the literature but I'm generally aware that the relationship between the olfactory sense and memory/nostalgia has been established as a phenomenon though whether or not its neurological basis is known, I've no idea. It's uncanny enough how a whiff of something can instantly transport oneself back decades to a specific place and time. I'm wondering if the locales thus visited tend to cluster around one's adolescence; I'm guessing that's the case. With myself, aside from smelleportation, I also experience a somewhat more specific occurrence when listening to the pop or rock that transfixed me as an early teen.

A few years ago, I was up in Poughkeepsie and my Dad mentioned that, while cleaning in the basement, he'd found some old vinyl of mine. I was a little surprised as I thought it'd all been traded in but I guess my brother Glen took a bunch before they disappeared and saved them. There were only a handful, including my Doors collection, which I couldn't quite work up the interest to give a re-listen so declined to take them. But also on hand was Cream's 'Wheels of Fire'. "Hmmm", muses I, "Wonder how this would sound to me today?" I had a soft place for it in my heart as it was the first Double-LP I ever owned, plus I'd liked enough of Bruce's and Baker's subsequent work (hated most of Clapton's) to pique my curiosity.

On the strictly musical front, my relative likes had flip-flopped since first hearing this at about 14. Now, the long, bluesy things sounded half-decent (not compared to their sources, of course, but in and of themselves) whereas much of the shorter, song-oriented material struck me as dated; not all, but most. Overall, it's still rather fun to hear.

However, those shorter songs, "As You Said", "Deserted Cities of the Heart", "White Room", plunged me right back to 1968 to a specific scene: lying on my bed, listening to Cream while immersed in Marvel comics. This is a really common reaction I get with music from this period: Rock music and Marvel. I can't imagine the number of hours I spent in that situation, reading and listening. Not very different from what I do now, to be sure so I'm guessing it has something to do with acquiring certain kinds of knowledge at a certain point in one's development, things that will turn out to be crucial building blocks for future areas of fascination. Comics (we're talking the classic Marvels, Steranko's Nick Fury, Adams' X-Men, Buscema's Avengers and Inhumans, Kirby's Silver Surfer, Barry Smith's Conan, etc.) were my intro to visual art, for better or worse. Things like Cream led to Crimson, Beefheart and on out. My future aesthetic life was in kernel form right then and there, waiting for some heat to pop. Not too surprising that simply hearing some of the same music resonates so much though each time it happens, I get giddy.

I had a similar experience recently with some early Zappa/Mothers that I unearthed. Freak Out and Only Money were my Marvel accompaniments, as well as introductions to more challenging musical material (the list of influences on the Freak Out jacket kept me searching for a long time). Freak Out sounds really dated now; the only song I can tolerate is Trouble Every Day. Only Money fares a little better because of all the musique concrete, but Zappa's adolescent hippy humor... sheesh!

Anyway, your post makes me kinda curious about White Room, about which I have very fond memories. Interesting parallel trajectories, since I also followed Bruce and Baker much more than Clapton.

Most of the music I listen to today is the same music I listened to when I was younger. I have added a lot to my likes but there is not much that I have discarded, 20 odd years ago I was listening to Laurie Anderson, The Velvet Underground, Lou Reed, Sonic Youth, Patti Smith, Talking Heads,Prokofiev, Stravinsky, Shostakovitch, John Cage, Philip Glass and these are still my favourites. When I was about 8 I loved Queen and I have to admit to liking them still.

Caleb, During the 90s, I re-acquired early Zappa discs (which I'd previously traded in) up to Burnt Weeny. I never owned Freak-Out (or Absolutely Free) in my youth, though friends did and I heard them. But a couple years ago, I went and picked those two up on disc.

The first surprising thing was that I could recollect the pieces on Freak Out virtually note for note. I didn't think I'd heard it that much and I'm guessing it's more a matter of being an impressionable sponge at that age and those particular combos of neurons and synapses not having yet disintegrated. Secondly, though, was how strong I thought the album was. I still think it works quite well overall, even the mock doo-wop stuff. On the other hand, 'Absolutely Free' fares far more poorly. I'm tempted to even go so far as to posit that his future career trajectory is encapsulated in those two recordings, the more rewarding music emerging from the paths broken in 'Freak Out', the more stilted, boring things (both rock and "classical") having their roots in the second album.

Also, I have to say that I enjoy his humor in "Money" (and, later, "Uncle Meat") very much. For me, his slide into adolescent nonsense doesn't begin until around 1971. Again, this may center around what myself and friends were finding amusing at the time and there was definitely, around 1970, a hippie-backlash in play then. Not a condemnation but a recognition of the silliness of some premises, especially as it became fashionable, as they gained wider roots in US culture and began to take on characteristics of an industry (I blame Woodstock).

Lines like "Oh my hair's getting good in the back." had enormous resonance for those honest enough to say, "Yeah, I've said that" and to realize how shallow and superficial those concerns were.

I have similar Marvel/music experiences with Wheels of Fire, although in the early 80s. (Happy belated birthday by the way, fellow Leo) I haven't listened to it in more than ten years though. Funnily, I remember las time I heard it thinking that "As You Said" was the best thing on it. Cellos, you see. Don't think Clapton's even on that one.