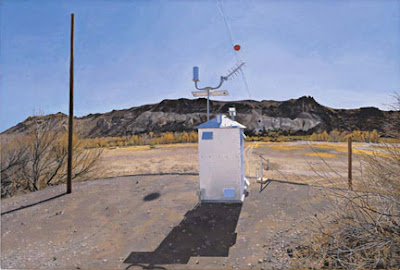 Was thinking about Rackstraw Downes this afternoon. Don't know that I've mentioned him here before but he's a big favorite of mine among contemporary painters. Born in 1939 in England (where else would he come upon an incredible name like that?), he began as an abstract-expressionist but in the mid 60s veered into a very idiosyncratic kind of realism. His paintings, both in reproduction and in life, often don't look like so much at first glance. Well enough done, but that's about it. Until you begin to see a couple of unique attributes. One is his use of multiple perspectives in a single scene. I wish there were better examples available on-line--if anyone knows, please fill me in--but often his landscapes have a wide enough aspect to require his point of view to change several times getting from the left to right edge. So you get a kind of arcing effect, including a bending of the horizon. It's something that hit home to me as I did similar experiments at Vassar, for instance doing a studio interior on a largish sheet of paper, beginning by drawing something on the far wall small enough that the top and bottom of the page would require that I look almost straight up and down. Very hard to accomplish and Downes, needless to say, pulls it off with far more subtlety than I.

The other, not always in evidence, is that one can discern, by observing shadows in the painting, that there are several hours worth of observation in play, the vertical umbrae splaying out at different angles. This plus the fine sense of air he imbues, imparts a unique kind of life into his landscapes and cityscapes.

I also love his choice of subject matter which tends toward the "mundane" and "featureless":

He did a few in Jersey City as well, at least one I can remember from underneath the Turnpike extension at Newark Ave., a great location indeed.

Last saw a show of his maybe two or three years ago in Chelsea which had a few striking works. Check him out if you get the chance.

Lucretius - On the Nature of the Universe (Sisco recommendation)
Sebald - Austerlitz
Chomsky - On Anarchism
Posted by Brian Olewnick at 4/03/2008 02:48:00 PM

He's not an artist that I had known previously but having had a bit of a look around online the past couple of days I like what I see. I find his interiors particularly compelling. There is one "untenanted Space in the world trade centre - winter sun, 1997" that is hard to view without being poignantly aware of what has susequently happened to the space, but is such an extraordinary image. It is the care and attention to the mundane that imbues it with lyricism.

Looks like there has just been an exhibition of his work, unfortunately the gallery website is only showing very, very small pictures.

The exhibition that just ended at the Betty Cunningham Gallery was a knockout (someone put some photos of it up on their blog here ). Downes is one of these people, like Keith Rowe, who's hitting his prime at a later age than most. He's a real workaholic, returning to the same locations at the same time of day for months on end. If you want to dig deeper, the Sanford Schwartz monograph is excellent.

Thanks for the link, Otis!