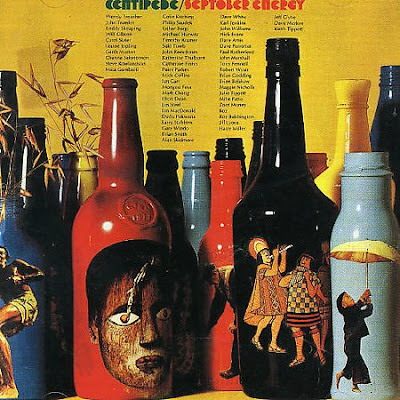 An unholy mess but, in large part, a goofily, sometime brilliantly enjoyable one. Fifty or so musicians, under Keith TIppett's direction, Fripp in the control room, splayed over two LPs, mostly in free jazz mode but with nods to rock and folk. Something of a Who's Who in London jazz and prog on those three days in June of 1971, although notably without anyone from the Bailey/Parker/Stevens (aside from Paul Rutherford) axis (much less AMM). But you have the South Africans Pukwana, Feza and Miller, a few Soft Machine-ites, Maggie Nichols, Julie Tippetts and many more.

There's a lot of bluster, too much I suppose, but the piece trundles along gamely, pausing for some lovely moments like the vocal/violin/bass section at the close of Side One, as hippily pretty as you could want. The Pukwana/Stabbins feature on the rockish portion beginning Side Two is jaunty and fun then careens into a proto-metal riff that's just charming in its innocent strutting. The string of solos that follows is fine though unexceptional (Alan Skidmore's tenor run is rather strong and heartfelt) and the rhythm section slogs things down a bit, but the anthem that closes out the projects first half remains as stirring as ever. This is probably the point I began falling in love with Julie Tippetts.

Things begin to fall apart somewhat on Sides Three and Four. A march with an intriguing melody but Crimsonesquely plodding rhythm swells in volume to levels that engender murderous reactions in spouses but to no great effect other than loudness. A rather inchoate free section follows; not too bad but formless. Most of the last side is given over to a kind of Mingusian theme that segues into a lilting section that might work save for the three drummers stumbling over one another. Nice saxello work from the late Elton Dean. A chorus enters to chant the naive but inoffensive lyrics, perhaps leftover from some Peoples Liberation Music event. This section stumbles on for an ungodly length of time whilst (that's for Pinnell) the horns have at it way back in the mix. There's a fake fade-out then the vocals meander back in. It closes unexpectedly, and pretty nicely, with a duo of Charig and Tippett.

Unwieldy as hell but with enough bright spots and an obvious abundance of enthusiasm to recommend it.

(btw, always enjoyed the images of those bottles. Was that technique--coating a clear glass bottle with pigment on the inside then affixing an pic on the exterior--in vogue at some time? I don't recall seeing it elsewhere, though it's attractive enough)
Posted by Brian Olewnick at 4/14/2008 07:30:00 PM