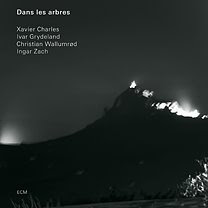 Ingar Zach was kind enough to send me copy of the new ECM release, Dans les Arbres, on which he plays with Xavier Charles (clarinet), Ivar Grydeland (prepared banjo) and Christian Wallumrod (piano).

A digression into my ECM history--I was a pretty early fan, coming into the label shortly after it was launched, mostly due to its presence in the New Music Distribution Service catalog in the early 70s. Maybe the first thing I picked up was the Music Improvisation Company album, entirely because of Jamie Muir's being there (I was still listening to Crimson at the time), giving me my first taste of Bailey and Evan Parker circa 1973 or '74. Was pretty well hooked for a few years thereafter, including (gulp) the first Jarrett solo albums (I still like "Facing You", dammit), early Garbarek, etc. I place the initial appearance of what would become known as "the ECM sound" (more an approach than a sound, maybe) with something like Garbarek's "Dansere" or Eberhard Weber's miserably titled, "The Colours of Chloe". It was apparent in the late 70s, somewhat assuaged by the adoption of the Art Ensemble, Reich, etc.

But by and by, I began ignoring the label as such, making the occasional purchase when an individual release warranted it. Over the last five or so years, I don't imagine I've bough more than two or three. I think the last may have been Marilyn Crispell's take on Annette Peacock (partially successful, imho).

Anyway, aside from an interest in what Charles has been up to and usually enjoying Ingar's work, I was curious if the ECM aesthetic was still in force, still tending to dominate a recording.

Well, yes and no. "Dans les Arbres" is a pleasant enough album, at a couple of points (the two longest tracks) emerging into the richly enjoyable. It's moody (the track titles, if my French serves me well, allude to various aspects of ennui), the textures have a watercolor-ish air even as they refer to Cage's prepared piano works. But there is a slight scrim over the music, a bit of the ol' gauze the label's known for. Maybe I'm bringing in past prejudices, but I did want to hear a sharper projection, a little more of the rough and tumble that surfaces briefly when Charles gets combative. A good record and I'm guessing a damn sight better than much that ECM issues these days, but I'd be curious to hear the same quartet on a different label.

Mathieu Saladin - 4'33"/0'00" - As everyone and their brother know by now, a reworking ("amplification maximum") of the Gianni-Emilio Simonetti recording of the Cage work, originally issued on Cramps in 1974. Well, pretty good I guess, especially when played loud. The variation you can pick out is interesting the effect (almost automatically) assaultive and overwhelming. Curious how much of the noise is vinyl-related, how much purely from the ambient sounds in the original situation (I haven't heard the Cramps LP). Nice idea anyway. Amused to see a price of 4.33 euros on the back of the sleeve.... 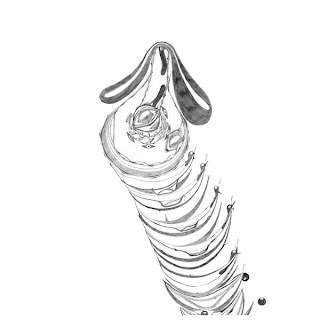 An LP on Simple Geometry from Tetuzi Akiyama and Jeffrey Allport, containing two sidelong improvisations. Widely spaced guitar twangs and other sounds (the latter from Allport, I assume), with abundant ambient noise. Nice and relaxed, very casual. Not gripping, especially, but then, I doubt it's intended to be. Totally fine to leave on in the background and let blend with your neighborhood.
Posted by Brian Olewnick at 4/20/2008 10:48:00 AM

hey, no gulp necessary w/ Jarrett. He's a major figure. Facing You is awesome, still probably my favorite. I don't love everything, but I don't really know anyone who does, and I for sure think that he's made more good-to-great music than not.

Yeah, I remain a fan of the mid 70s Redman/Haden group, less so of the Garbarek collaborations. A couple years back, I repurchased "Expectations" so I could play "Common Mama" at Record club and it still sounded pretty great.

As much as I loved them at the time, not sure I could sit through Bremen/Lausanne or the Koln Concert today.

I really like that Allport/Akiyama album one of only a couple of LPs I bought last year. I've played it a lot but not as much as I would if I had a digital copy. It probably would have made my "best of" list had that been the case. It does as you say slip into the background decently but there is a lot there to reward close listens.

I, too, vastly prefer the 'american' quartet. I still dig the 70's solo stuff, though maybe excepting Koln - haven't heard that in years, despite having it.

Any of that american quartet stuff is gold, though. Fort yawuh, Mysteries, Treasure Island, etc.

"I'd be curious to hear the same quartet on a different label. "

You already know this Brian, as you reviewed it, but add Martin Tetreault's turntables and Tommy Klufton's bass to that quartet and you get the No Spaghetti line up on the Sofa release Sketches of a Fusion from last year.

That disc was really rather good, but I think Tetreault really made it. Will be interesting to hear how this sounds without him.

"You already know this Brian"

Never make such assumptions with the aged. I'd forgotten the same four were on that release.

It's Christian Wallumrod on piano i've seen his group live once and it was quite good, much better than the record(s) he released on ECM ...

Thanks LukaZ (damned, difficult to remember for Americans, Norwegian names!)