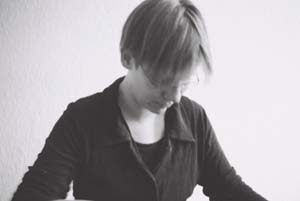 Berlin Electronics (absinth)
absinth (with Michael Renkel at the helm, from what I understand) returns to the 4-mini disc release format, though in a 5x7 inch packaging. Within which, unfortunately, the discs are overlaid in pairs, two by two and then, when the envelope is folded, atop each other. In my case, this resulted in the surface of one disc adhering to the little nubbin holding another across the way and removed a few square millimeters of CD surface, rendering the disc unplayable. So I don't know what Andrea Ermke's music sounds like. Nice hand-painted covers in indigo encaustic, though.

Two of the others, those by Gilles Aubry and Ignaz Schick, didn't do much for me either, the former consisting of computer-generated sound occupying feedback-y territory and the latter, from someone whose work I've enjoyed in the past, combines "naive" sounds (flute tones, jungle-y thing) with electronics in a gauzy, kind of insubstantial manner that never connected for me. Both are OK but didn't really leave much of an impression.

The saving Grace is Annette Krebs' "Untitled III variations/Excerpt" (Couldn't locate a cover image on-line, hence the pic of Annette above). Her sense of structure almost always syncs up well with my own so that juxtapositions which, objectively, I might consider "awkward" or jarring seem to possess some elusive naturalness that I find fascinating to attempt (unsuccessfully) to unravel the whys and wherefores of. This one features a rather disparate sequence of sound elements, sometimes overlapping but more often one after another, kind of like an array of objects on a table, allowing the viewer/listener to make connection or not. For me, it works quite beautifully and, at 15 minutes, is of perfect length.

*********
Been playing "The Breadwinner" a bunch over the last couple of weeks as well. It's a really strong recording, certainly one of the best things I've heard this year. Almost automatically, though unfairly, I mentally pair it with "Salmon Run" (I do hear it as a bit more Lambkin than Lescalleet for whatever reasons). They each have different virtues. "Breadwinner" is solider, more viscous. The earlier release is stranger, more oneiric. On a given day, I prefer one to the other. But there's not a weak track on the disc, a very fine release.
Posted by Brian Olewnick at 4/08/2008 04:17:00 PM

I have this set enroute, looking forward to it.

on one listen, the Krebs disc is GREAT. between this and the Hayward disc, she's on a roll.