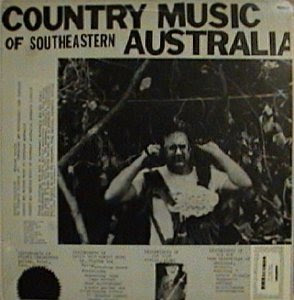 I've never been the biggest fan of Chadbourne (as a musician--I really enjoy his reviews on All Music, think they're among the best at that site). I remember seeing him at Environ around 1977, I think with Zorn, Polly Bradfield and a few others, maybe David Moss. He had his rake out. But in the early 80s, I picked up a few records, enjoying some aspects, not others. He's one of a sizable number of musicians who I'd prefer hearing perform straight than out, in Chadbourne's case tending to mean doing covers of folk and country favorites. His political rantings, well-intentioned though they may be, tend to be painfully shallow, obvious and naive, especially when set against, say, a Phil Ochs song. He's more Roger Miller than Ochs. Plus the fact that he's a dead ringer for the primordial grandmother.

The lo-tech approach was pretty cool then and still has its charms--abrupt edits, crappy sound, etc. "Country Music from Southeastern Australia" is the out-est of this bunch, humorously packaged as an ethnic field recording and vacillating between C&W wannabee songs and random noise. David Moss, Rik Rue and Jon Rose accompany. It's kinda fun; I could imagine hanging out in some seedy barroom, enjoying these guys farting about, chuckling at the lowbrow humor, immediately forgetting it on the way home.

"Country Protest" (surprised there's not a larger image around) is slicker, Chadbourne employing some traditional players, and it works reasonably well. This is from 1986 and you can hear the kind of ADD collage that Zorn would shortly pursue in the opening medley which, over 11 minutes, includes 14 pieces, among them "A Whiter Shade of Pale", "Misty", "To Sir with Love" and "The Shah Sleeps in Lee Harvey's Grave". His cover of Ochs' "When I'm Gone" is as stirring as his original, "Perverts on Northridge", is puerile. 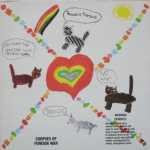 Lastly is his collaboration with members of The Violent Femmes, "Corpses of Foreign Wars". For my money, the best of the three, maybe not coincidentally the most rockish. Still mucho annoying in spots, sophomoric to the extreme, but the Ochs medley that closes the album (Outside a Small Circle of Friends/White Boots Marching in a Yellow Land/I'm Gonna Say It Now) is my single favorite Chadbourne performance in my very limited listening, very strong.

For good measure, let's include an entirely obscure piece of vinyl, one which I'm not surprised at all to be unable to find an image of, Jose Chalas' "Living on Avenue F", recorded in 1986-87 for Sunjump Records. Mid-80s, Lower East Side jazz rock, notable for containing one of Dave Douglas' earliest appearances on record (also features a group photo on the back showing Douglas resplendent in a full head of wavy hair, kinda funny). Jim Mussen, a drummer who worked a bunch with Elliott Sharp, is also on hand. Chalas plays guitar; the music isn't awful but is rather forgettable, a bit of electric Miles, funk, DX-7 sounds; almost coulda been a Laswell production. Don't think I ever heard of Chalas again.

I'd be interested in hearing what you think of Sound Art, I had looked at in on Amazon but the reviews had put me off slightly.

I'm only about 50 pages in, but so far it's a good historical overview of the area.

Just saw those Amazon reviews, lolabelle--I guess so far I'm about midway between them. I'm now about 120 pages in (there are many photos, so it's a quicker read than one might think) and my "decent overview" opinion still holds. There's not, so far, a lot of analysis, more a listing of various sub-genres and examples thereof with descriptions of works.

I may give it a go, I recently re-read a review of Extract: Portraits of Sound Artists which I had thought of getting last year but then completely forgot about, I just checked the website it was available from and found it has sold out. Have you read it?

Finished the Licht book yesterday and it pretty much stayed true to form throughout. Occasionally, he provides his own thoughts or criticism on a music or form but 95% of the time it's simply a listing of people, recordings, events, etc. Which is fine as far as making the reader aware of this or that individual he may want to search out, but otoh isn't the most enlightening work. Given the term "sound art" is diffuse in the first place, Licht also stretches things uncomfortably here and there to include, for example, almost any rock musician who ever did anything slightly experimental.

Not unhappy I bought it, though. As mentioned before, the Bill Fontana piece ("Harmonic Bridge") on the CD is excellent as is Bernhard Gal's "57A", and will doubtless cause me to go out and hear more.

I think i might get it, it seems a good price for a book and cd.

The best Chadbourne I had was a cassette of him doing Monk songs unaccompanied (a buddy of mine gave it to me after buying it at a concert; I'm pretty sure Eugene hand-printed the song list). Every other recording I've heard was laced with immature crap except for The Hills Have Jazz on Boxholder which is ok; are any of the Killbilly records any good (I'm thinking no)?

His concerts were frustrating also; the guy has chops but his incoherent rants are tiresome. I'm thinking I'm not alone in feeling that way because in the middle of one somebody yelled out "Shut up and play" at which point he returned to playing without having missed a beat. Either he hears it a lot or the guy was a plant.