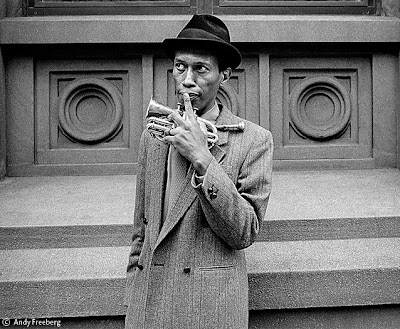 There are people who seem to possess an inherent musicality, something in them that causes virtually everything they do to manifest as "musical". In jazz, Monk is often so cited ("He even walks musical"), an assessment with which I agree. For myself, another has always been Don Cherry. It's as though melody is coursing through his
veins. However far he ranged, however blistering or abstract his playing, there was always, at least up to a certain point, a sense of song there. One of my favorite musicians.

I believe I only saw him perform three times. The first was at the old Kitchen, on Wooster and Grand, I guess around '76, in a loose knit band with his wife Moki on tambura (I think) and two or three others I can't quite remember, possibly Frank Lowe among them. Maybe Badal Roy? In fact, if you're still reading here Mark Forman, I think this concert was where we first met, which would place it around October of '76.

Saw Cherry with Ornette in the summer of '77 at Avery Fisher Hall in Lincoln Center, an amazing "double bill" with the Cherry/Redman/Haden/Blackwell quintet first, then Prime Time.

The last time was not so pleasant, a quartet date at a short-lived club on Houston St. called "Spiral", sometime in the mid 80s. Cherry was apparently in the midst of one of his bouts with heroin and was spaced out to the extreme, seemingly having little idea where he was, what was going on. Bob Stewart was with him on tuba (and was spectacular). There was a guitarist (I don't remember who) and a last-minute, young drummer who was clueless. 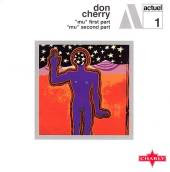 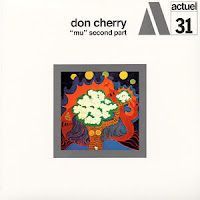 Playing through my Cherry vinyl, I begin with the two Mu sessions, two of the few original Actuel LPs I own (I have earlier Cherry, but on on disc). They still stand out for a kind of rawness, a real in-your-face recording quality that's very bracing. Great playing, of course (Blackwell, with Roach, still my favorite jazz drummer), wonderfully wide-ranging. I'm pretty sure these discs were my first exposure to the compositions of Dollar Brand. 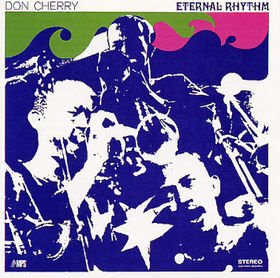 "Eternal Rhythm" remains my favorite recording under Cherry's name and, imho, one of the finest jazz records of the 60s. Wild, absurdly far-reaching from gamelan to the blues, awesome work by Sharrock and Karl Berger, an olio that has no business working but does so beautifully. More thoughts in my AllMusic write up here. 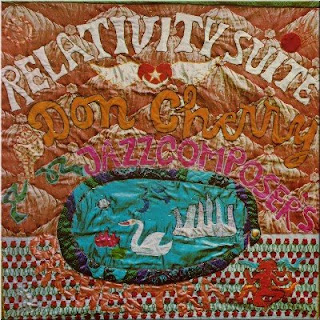 Side One of "Relativity Suite" is just about as good, a gorgeous mini-suite that features some tremendous Cherry vocals (he's really one of my fave vocalists in jazz) and the sublime "Desireless", surely one of the loveliest melodies in the music. That wonderful rhythm in the 2nd section...The second side's more of a mixed bag but not bad at all, nice Bley piano and rousing Blackwell to finish up. Is this still not available on disc? iirc, Joe McPhee participated in rehearsals for this but couldn't make the recording date, a shame.

I have "Orient" as a double LP on Affinity (can't locate an image--currently available on disc with a cover showing an ant walking around a yellow fruit or lemon drop) though I think it's shown up in various guises. The first disc is a trio date from 1972 with Han Bennink and Moki Cherry. They begin with a version of "Desireless" then go out from there, a bit ragged but much fun. It's kind of a mess but Cherry was responsible for some glorious messes and that musicality and engaging spirit almost always carries the day. The other disc is from a concert with Okay Tamiz and the great Johnny Dyani. Should have been more Cherry/Dyani collaborations, two supremely musical fellows. 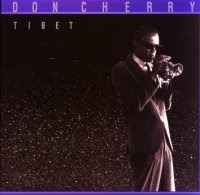 I think the album I have titled "Tibet" (on Picc-a-dilly) has also been issued elsewhere under different names--currently available combined with "Eternal Now"--recorded around '74, I think with Don Cherry (piano, percussion); Christer Bothen (piano); Bernt Rosengren (taragot); Agneta Ernstrom (tibetan bell, etc); Bengt Berger (piano, mridangam, etc). Good record, Cherry venturing out into areas even further removed from jazz, not playing trumpet at all, despite the cover photo. "Bass Figure for Ballatune" is a pretty amazing piece for pounded piano a la an especially vociferous Terry Riley. 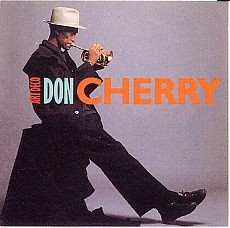 Mighty big jump, chronologically as well as stylistically, to the next and final Cherry vinyl in the house, 1988's "Art Deco". Pretty widely heralded at the time for dopey reasons--Cherry coming back to the mainstream, showing those young lions a thing or two. It's smooth, accomplished and more than a bit bland. Nice quartet with James Clay on tenor, Haden and Higgins, Cherry's trumpet work is quite pure though lacking the passion of his best playing. Overall, I found the effort disappointing though I imagine, or hope, that the deal with A&M got him a bit of money. Some of his subsequent discs, particularly "Home Boy" & much of "Multikulti" were dreadful.

*ahem* This is one in an endless series of postings derived from listening through my vinyl. Certain items, for one reason or another (poverty, unavailability, lassitude) I only have on CD despite their age. Complete Communion is one.

Ah, I sit corrected. Was it lassitude that was the underlying reason on this?

Dunno, don't remember. I began listening to this sort of music in '72 and tended to concentrate my buying on current stuff with some major exceptions (Ornette, Mingus, Cecil, etc.) for whom I went back and purchased a good number of earlier (pre-'68, say) releases. Others, like Coltrane, Miles, et. I could hear very often on KCR so tended not to buy so much (regretted today).

Some stuff necessarily slipped through the cracks, including Complete Communion and Where Is Brooklyn? (not sure which others of his might've been generally available back then)

Nice post. Is Cherry's "Brown Rice" (my original LP just says Don Cherry on the cover, on A&M Horizon, one of those LPs you have not acquired? Or maybe just overlooked? Anyway, wondering what you think of it.

Never got 'Brown Rice'. I think I recall being dubious when it first appeared, leery of its crossover aspect but later on heard some of it I kinda liked. But I don't really know it very well, probably should check it out.

Dang, I've been looking for any sort of recording of that Cherry quartet with Bob Stewart for years. Glad to know it was at least a real group. Bob Stewart just plain makes everything sound better.

Was that a working group? I have a vague memory that the drummer was supposed to be someone I was eager to see and was disappointed when he didn't show, but I can't recall who that would've been.

I have seen it mentioned a number of times and they did one track on that Multi Kulti disc with Cherry, Stewart, Carlos Ward and a drummer who I can't remember. Maybe the drummer was a rotating member? It seemed like a group with the potential to be great.

I had time to put "Brown Rice" on the turntable and give it another listen. A fair amount of overdubbbed vocal effects and electronica. Normally this would put me off, but it works here-- at least for me. One can hear why some view Cherry as a forerunner of fusion and world music. Cherry's trumpet is somewhat overwhelmed by all the other effects, and is given a sort of lush ambience. The intent seems to be a soundscape of a dreamy, transcendent quality. Oddly enough, it put me in mind of Miles' "In a Silent Way."