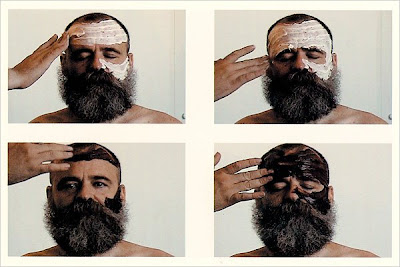 Record Club core member Nayland Blake received a nice feature in the Sunday NY Times today, in the article on portrayals of racism in contemporary art. The pertinent part:

Ethnically neutral? That’s just a code-term for white, the no-color, the everything-color. For whiteness is as much — or as little — a racial category as blackness, though it is rarely acknowledged as such wherever it is the dominant, default ethnicity. Whiteness is yet another part of the postracial story. Like blackness, it has become a complicated subject for art. And few have explored it more forcefully and intimately than Nayland Blake.

Mr. Blake, 48, is the child of a black father and a white mother. In various performance pieces since the 1990s he has dressed up as a giant rabbit, partly as a reference to Br’er Rabbit of Joel Chandler Harris’s Uncle Remus stories, a wily animal who speaks in Southern black dialect and who survives capture by moving fast and against expectations.

In 2001 Mr. Blake appeared in a video with another artist, AA Bronson. Each had his face slathered with cake frosting, chocolate in Mr. Blake’s case, vanilla in Mr. Bronson’s. When then two men exchanged a long kiss, the colors, and presumably the flavors, began to blend. Shared love, the implication was, dissolves distinctions between “black” and “white,” which, as racial categories, are cosmetic, superficial.

Can't believe he couldn't have gotten them to squeeze in mention of Record Club but otherwise, way to go, Nayland! btw, the slyboots mentioned nothing about this on Friday. That's Bronson pictured above, incidentally. Here's a shot of the project's denouement: 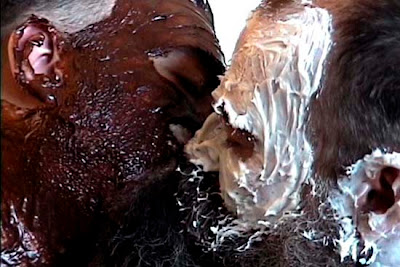 Thanks for the Cage link in the previous post, I'd never thought of looking him up on youtube. I'm reading Conversing with Cage at the moment, must be something in the air.

If you're ever in town, lolabelle, you have a standing guest invite.

imho, Cage looms larger and larger all the time.