After an initial flurry of recordings sent my way in January, things had quieted down a good bit for a few weeks and I figured the message had gotten out (dammit) that I wasn't going to be doing reviews this year. Then, last week, a whole passel of stuff showed up. Some bore notes to the effect that, "I know you're not writing up these things now but I wanted you to hear this", which sentiment is greatly appreciated, thanks. 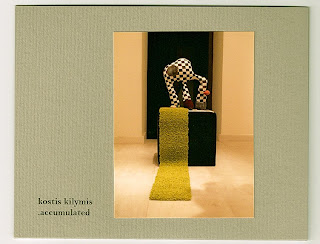 Kostis Kilymis - .accumulated & Thessaloniki 1963, a diary from b to c (Organized Music from Thessaloniki) Two very enjoyable sets of collaged sound from Kilymis, each combining field recordings with direct input of an abstract electronic nature, the latter occasionally dipping into the everyday world of ring tones and other detritus. As with much of the better music I’ve heard recently, it’s not so much the newness of the sounds or conception, more the grace (or attractive awkwardness) with which the sounds are deployed. 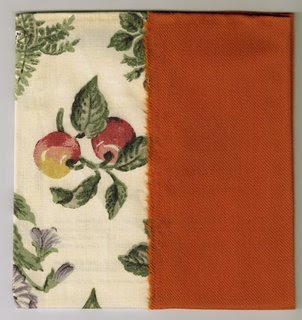 Never forced, moments that initially seem out of place make sense a minute or two onward and the variety of sounds and approaches always keeps things bubbling. Both discs work really well as wholes—nice to see a bunch of good work emanating from IHM denizens in recent months. Plus, the Thessaloniki 1963 disc comes in a lovely cloth disc cozy. 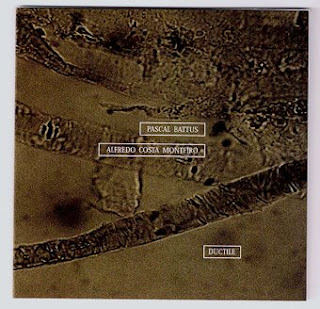 Pascal Battus/Alfredo Costa Monteiro – Ductile (jointly released by OrgThel and A Question of Re_entry—I’m considering a campaign for shorter label names…) Costa Monteiro has issued at least two discs of solely paper-derived sounds; here it’s a duo of same and, as before, the results are strong and somewhat astonishing. Hard to get that “Gee whiz!” kinda thought out of my head, like, “This is paper?!?!”. “Ductile” tends toward the brutal as well, fierce waves of sound scouring one’s speakers clean, rumbling and pealing like nearby thunder. Harsh and then some.

Three fine releases right up front for this label—nice start! 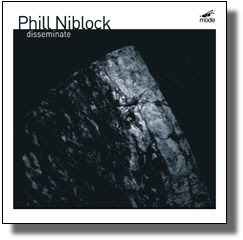 Phill Niblock – Disseminate (Mode) Part of my ongoing, if sporadic, attempt to Phill out my Niblockiana (this I bought). Three steady state works, one for orchestra, one for low winds (contrabasses flute, tuba & saxophone, this one constructed by Niblock from manipulated recording extracts) and one for a quintet of viola, cello, bass clarinet/soprano sax (Lucio Capece), flute and trombone. Fine “blank wall” listening, that is, each sounds like a changeless drone but listening with even a modicum of attention evokes all sorts of detail. Excellent stuff.


Our own Robert Kirkpatrick sent over two very strong works as well: “thaw”, a 3” disc blending water droplets with hyper-clear statics and keening whines, beautifully handled and a compilation of the first three releases on his Hollow Earth label under the title, “Documenting the Decline”. The trio of pieces originally released as “Sounds of the Hollow Earth” are quite good, especially the somewhat terrifying final one, all mutant bird squawks and generally fluttery horror. “Dance of the New Mysterians” is as loopy as its title but oddly hypnotic and fascinating. Order some and force Robert to burn more copies. hollow earth

Things are not so good on the Room40 front. I have nothing inherently against lullaby-pop or even waif-rock (is that a term in use?), but “The Bedtime Beat”, from Lullatone (Shawn Seymour & Yoshimi Tomida), pushed my limits. Kind of like Penguin Café Orchestra for tots, cutesy with the occasional semi-catchy melody, simply constructed, but several shades too saccharine, even with the “quirky” instrumentation, for its own good. 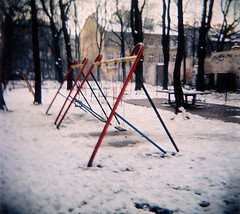 The Rational Academy’s “a heart against your own” harkens back to early 80s art-rock of the Weekend variety, not quite as good, a bit more slick. Lawrence English mans the electronics for this nonet; it might be more or less his band and his pieces, not sure. Very well produced, competently played and sung, but if you heard them over the closing credits of some trust fund indie film, you wouldn’t be surprised. Not unpleasant, but not memorable either. 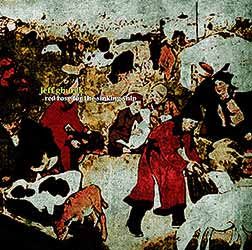 Jeff Gburek’s “Virtuous Cycles” is an early favorite of mine this year but his concurrent “Red Rose for the Sinking Ship” (Triple Bath) doesn’t quite compare. Some nice sections (the third one, especially, with a subtle mix of street noise, obscure squeaks and faint chimes) but a bit rambling for my taste. It doesn’t gain the traction I wanted to hear, maybe only because I liked his preceding one so much. Not bad at all, but I wants me more meat. (Limited edition of 96, btw) triple bath

Have you been to any good exhibitions lately?

I like Kostis' music too Brian, "grace" is a great word in reference to .accumulated. I need to remember to steal that one!

I've not heard the Gburek yet but I do like that sleeve art.

As for exhibitions its been dreadful here for over a year, but a recent check on the Tate Mod site shows a plethora of goodies on the way:

Might make my way over to the Duchamp/ManRay/Picabia show soon too.

Tate Mod does seem to have an interesting programme this year. I'm going to go down for the Rothko but a few other things have also caught my eye.

and richard, i hear the duchamp/man ray/picabia is worth the visit, along with (surprisingly) the Juan Muñoz show that is also on. But those two upcoming ones...

lolabelle, not recently but I have on my list the Courbet and Jasper Johns shows, both at the Met.

Thirding Kostis Kilimis's work. I only have The cloth-bound one, but I really like it.

i also happened to listen to kostis kilymis just because it "happened" to "accompany" the release of alfredo costa monteiro with pascal battus much more interesting, real, challenging and musical (by any means) paper work and i find it quite dull and un-true..maybe the problem being that it is quite....good and nothing beyond that..the thing is that everybody's comments on such.....music-items( ihm non-musicians) seem to meet on that conclusion=quite good-not bad

hi brian, if "virtuous circles" was in fact an early favorite, did you happen to write something about it somewhere? it never made it my way if you did. i would appreciate any comments you might have, especially since you make a comparison. i say it not only for your readers but for my edification. btw, the cover of "red rose for the sinking ship" folds out to display a series of very rare propaganda posters from maoist china.

brian, just found the review of virtuous circles.
thanks,
jeff

Interesting that the sections of Red Rose that you do like are those that resemble most the textures of Virtuous Circles but also you find them too rambling. I would say "rambling" is what they represent fairly well (I am a bit of a nomad, so why should my work not reflect that?)--but Red Rose is far more dynamic in range and materials and just quite, quite different in tone and manners, for good reasons. I really would have liked you're Virtuos Circles review to have given a take on the writing contained therein. Thanks none the less for taking your time.
regards, jg
www.futurevessel.com/orphansound

Hi Jeff, thanks for your comments. You may have missed it (Allah knows, it wasn't covered by CNN), but I'm pretty much taking a sabbatical on reviews for this year. Nonetheless, when people send me things (for which I'm grateful!) I feel obliged to at least write a small impression here, hence the brevity and lack of scope.