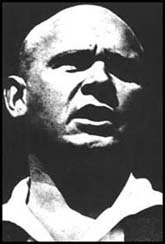 I've been listening to Cardew's recording of "Thälmann Variations" a whole bunch over the last couple of weeks. This is the Matchless recording which seems to be out of print? For some reason, I have it on vinyl, perhaps because it was never issued on disc? In any case, it's my only Cardew in that format, not counting the memorial concert double-LP on Impetus, which I wrote about here

"Thälmann" takes up all of Side One here and must automatically be compared with Rzewski's "¡El Pueble Unido Jamas Sera Vencido!" from around the same time. Indeed, I'm a little curious which came first or how much, if any, communication there was between the two at the time. I assume this and much more will be covered when John Tilbury's Cardew biography sees the light of day (I can't wait--anyone have recent news?). I first heard the Rzewski very soon after its release on Vanguard in, iirc, 1976 with Ursula Oppens at the piano and fell absolutely in love with it. Still am. This is doubtless a major reason why I'm more open to Cardew's worker's song period than many. Especially when divested of the banal lyrical content you find in People's Liberation Music, the melodies and variations stand quite well on their own, making their points all the more forcefully fpr the lack of explicit content.

[I don't know the circumstances of this recording, but it's interesting that one can pick up outside-the-room sounds, especially car horns, periodically. It imparts a real world tinge into the otherwise "classical" and removed situation.]

Like the Rzewski, Cardew's piece is kind of a theme and variations, though not as strict, here incorporating music from several sources including Eisler, Charles Koechlin (a song called, "Let's Free Thälmann"), popular worker's songs and funeral dirges. To my ears, it's not quite as impassioned as the Rzewski, not so brilliantly and intricately wrought, not as "hard fought", but it remains a lovely, moving work, a string of observations that holds together well, offering something of a panoramic view of the working class' struggles and occasional victories through the eyes of one who was fairly deeply involved. Though that goes to a whole other question of just how deeply artists like Cardew (or Rzewski) can really be when, as in his case, they came from extremely high-placed families and knew that there was always, if it came to it, a cushion to fall back on. I get the sense it was something that Cardew struggled with quite a bit and, again, I hope it's gone into by Tilbury.

In purely pianistic terms, I'm not sure that in this kind of music (as opposed to, say, Feldman) Cardew, fine as he is, can hold his own against someone like Rzewski who is simply astounding on a technical level. The romantic drama in his work fits that éclat perfectly. (Wondering if Tilbury ever tackled The People United...) Cardew's a bit more ruminative which works beautifully in the more pastoral sections, maybe a tad less convincingly in the rousing ones. Still, a fine piece deserving of being heard more often. Ironically, it's available these days on the New Albion disc with Rzewski at the keys and I actually prefer the airiness of Cardew's rendition.

The second side of the album contains six short pieces: the joyous march of "Bethanien Song" (interestingly commemorating a change in plans re: the conversion of an old hospital from an artist center to a children's hospital--wonder if the same feeling would hold today?); "The Red Flag", based on the changes to "O Tanenbaum"; "Soon", based on a pamphlet of Mao's from 1930 promising imminent revolution, lovely, quasi-minimalist piece; and a trio of Irish songs, "Croppy Boy", "Father Murphy" and "Four Principles on Ireland". These last seem loaded down with a bit more weight than they're capable of supporting, matters getting a bit sloggy and technique-strewn.

Well worth tracking down on the whole, however.

FWIW, Thallmann Variations was written in 1974, the variations on the People United were completed in 1975. Cause Cardew & Rzewski knew each other, without research there'd be no easy answer as to how much either of them may have influenced the other in these works. I think you're right in thinking that the Rzewski piece is both more formally complex and more emotionally involved, though.

The issues you raise of politics and class origins are complex but, especially in Europe, it's not uncommon for people born outside of the working class to understand and empathize with political analyses that favor the working class.