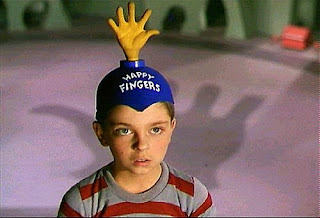 Ever exploratory provided it doesn't get too inconvenient, Record Club staged its first video version last evening and it went very well. One of the many fine things about the RC project, for me, is that I get exposed to music (and, here, video) from areas in which I would've thought to have little or no interest. Often I'm pleasantly shocked to find something of unexpected beauty. At the very least, even if I don't become a full fledged fan of a given person or form, I can at least gain a better understanding of why other folk love it.

One aesthetic that has always stuck in my craw is the "musical", especially in terms of Broadway but also in film in its show tune aspect. Well, Nayland brought in two excerpts that, I must admit, caused me to reconsider somewhat. The first was from "Sweet Charity", the 1969 Bob Fosse vehicle with Shirley McLaine based on Fellini's "Nights of Cabiria". The sequence he played was a medley of three dance pieces, "Aloof", one derived from boxing (can't remember the name) and a psychedelic, rocking finale. Really amazing choreography specially, as Nayland noted, in how independently the various parts of the dancers' bodies were coordinated. The second, from which the pic above is taken, was the dance of the exiled instrumentalists from "The 5000 Fingers of Dr. T", an extremely weird musical from 1953 based on the Dr. Seuss tale. I'd somehow never seen this, as a child or adult, but it's seriously freaky with astonishing homo-erotic overtones for the time. In excess of 50 green-painted individuals playing a huge range of fantasy instruments with apparently wild abandon but in amazingly interlocking precision. Eye-opening.

Speaking of things I wouldn't have thought I'd like so much, Dan showed Billy Preston's number from the Bangladesh concert, "That's the Way God Planned It". Very nice.

Nina was in bizarro Asian child mode, showing this young Korean girl singing "Hey Jude" and, far more horrfying, this Japanese teen ripping through Kansas' "Carry On" on what I take to be the latest in one-girl-band organ gimmickry. Sca. Ry.

Myself, I went with the great Son House, performing Death Letter from about 1965 and the classic (though, apparently, previously unseen by all present last night) John Cage appearance on "I've Got a Secret" in 1960. If you've never seen it, it's required viewing.

Julia ended the evening with a wonderful video by Spike Jonze of Fatlip from around 2000, I think.

While trawling through You Tube over the last few weeks in prep for this meeting, I was having a great time with older, acoustic blues musicians, finding tons of fantastic music. Spurred me, yesterday, to pick up the Bukka White release on Sonet (on at the moment, sounds great) and "The Definitive Charley Patton" 3-disc set, as well as putting in an ebay bid on Robert Pete Williams 1961 LP on Arhoolie, "Angola Prison"
Posted by Brian Olewnick at 3/29/2008 10:09:00 AM

Sounds like an amusing evening Brian. Next time you should play this video of 4'33" done in Mario Paint

Excellent! I'd looked at the Tudor performance on You Tube, but Mario clearly possesses a finer touch.

Yeah Tudor is classic of course, but you can't deny the Mario.

Speaking of Tudor, and if you been searching for him on the 'Tube you've probably found these, but I find these modern realizations of Rainforest by various student groups great. This one is my favorite (takes a bit to get going), but there are a several of them that can be found here. It's pretty cool that multiple courses (at least three different ones in the link above) are using this piece as a teaching aid. It makes sense too, there are a lot of principles there, but they are all pretty simple and straightforward. Nothing like a fun application to get them to sink in.

as for blues, Skip James and Blind Willie Johnson, if you're not familiar with either or both already.