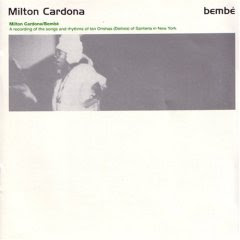 I first heard percussionist Milton Cardona in the context of Kip Hanrahan's work in the early 80s. This album, "Bembe", appeared on American Clave in '86 and it's a beaut. It's entirely devoted to Santeria chants with a group made up of a lead singer and percussionist (Cardona) and an ensemble of response singers and percussionists (the drummers including Hector "Flaco" Hernandez, Steve Berrios and Jose Fernandez). My working knowledge of Santeria music is just above minimal so I can't really say how representative this is, but the impression I get is that Cardona knows what he's doing and it sounds damned real to me. Gorgeous Afro-Cuban melodies, stirring (and rough) choral singing and hypnotic percussion combine for a moving, thrilling recording. I'd appreciate any recommendations along this line.

While researching a bit, I noticed Cardona put out another disc under his name, "Cambucha", in 1999, also on American Clave; interested to hear that. Though Hanrahan-led or produced projects in recent years have left me a bit cold. I picked up Deep Rumba last year and, expecting great things, was let down. 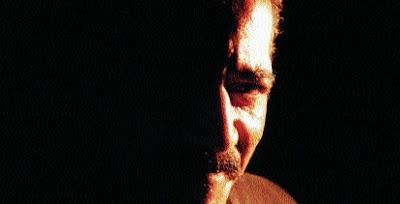 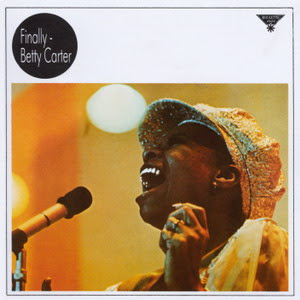 Along with Billie Holiday, Betty Carter has always been my favorite female jazz singer. I bought this recording pretty early in my listening, maybe around '76, rather odd in the context of the other things I was listening to at the time (AACM, Taylor, Ornette, etc.) but Carter's singing inevitably melted me. I have a few other releases but have always enjoyed this one the most. I believe it was something of a comeback record, recorded in 1969 at Judson Hall, NYC with Norman Simmons on piano, the great Lisle Atkinson on bass and Al Harewood on drums. A fantastic series of tunes including "Blue Moon" (taken drastically up tempo), "The Sun Died", "Girl Talk" and a fantabulous rendition of Randy Weston's "Ego". Her elasticity is astonishing, bending and warping the melodies into pure Carteriana.

I never had the occasion to see her perform, which I greatly regret. Everything I've read about her indicates, music aside, she was something special. 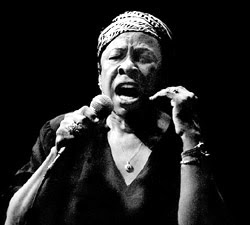 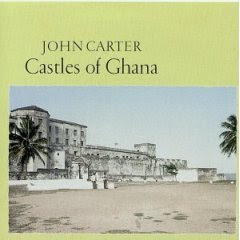 There's one other Carter amongst my vinyl, John. Never really explored his work as much as I probably should have, with only this and the follow-up, "Dance of the Love Ghosts" under his name, plus a fine Hat disc with Bobby Bradford, "Movin' On".

I know this Ghana sequence (were there three or four albums in the series? I don't quite recall) is hailed by many as one of the signal achievements of jazz in the 80s. While I enjoy it very much, I've never quite gone that far. It's interesting, listening now, to hear tinges of the same tonalities that Ornette used in his symphonic work, "Skies of America" considering that they grew up together. The title track from this one is something of a monster, especially once Carter's burbling clarinet surfaces alongside Bradford's cornet. The remainder of the album doesn't quite live up to that, though it's fine in a good-Muhal kinda way, even if Terry Jenoure's vocals are a bit woozy.

"Dance of the Love Ghosts" (admittedly, I have a tough time getting past the title) strikes me as less focussed and a tad shrill; not bad at all but not the stuff of legends.

I get the sense that I'd generally have enjoyed Carter in small group settings (like that "Movin' On" date). Recommendations in that vein appreciated.

Some of the best group John Carter can be found on Horace Tapscott's The Dark Tree (Hat). His work on West Coast Hot (Novus) is great too, but I gather it's a bit hard to find these days.

Nice to read about your affection for Betty C. Those Roulette sides are magical, IMO.

I still have West Coast Hot, I could burn it for you if you care.

Carter & Bradford's Seeking (1969) on Hat is a personal favorite. Carter plays alto (what a tone!), tenor & flute along with the clarinet. Strong group dynamic both reminiscent of and distinct from Ornette's foursome. And melody, melody...anytime I have "Karen on Monday" in my head I'm not complaining. The duo Tandem records are also worth checking out if you're fond of screechings and difference tones.

No Elliott Carter on vinyl? How about some more Betty recs? I only have a later live disc with Geri Allen, but it certainly is a keeper.

I realize it's probably a major blind spot, but I've never really warmed to Elliot Carter (I have some of his pieces on multi-composer compilations, but nothing with only his work). It's not like I've ever really given him a fair shake, just going by things I've heard on radio and elsewhere over the years. Give me a pointer on where to start (he's only, what, 99?)

Other Betty albums I enjoy include "Now It's My Turn" (Roulette), "Whatever Happened to Love?" (Verve) and "It's Not About the Melody" (Verve). Should probably pick up the duets with Ray Charles sometime. Haven't heard the one with Geri Allen.

If you're free I'd suggest starting with Argento's concert on April 9th at Columbia's Italian Academy. They're playing the Carter Triple Duo which (like much of his work) benefits from being seen in performance. The visual information really distinguishes the counterpoint and clarifies what might be overwhelming, if not just plain confusing, on a recording. I saw some of the same players perform the piece a few years back - sit close. Also on the program are Berio's O King, some of Scelsi's wind music, and three of Sciarrino's gripping Notturni for solo violin.

Thank for the BC recs, I've been meaning to check into her catalog for a while. And now for the Carter Family...

Thanks for the heads up on the Columbia show. I'll keep it in mind.

I can understand being not wild about Elliott Carter. I like him very much, personally, but he has a very specific thing that you kind of have to meet him 90% of the way on.

I'd try the string quartets, they're probably some of his signature pieces. Arditti's done them, as has the Julliard quartet, I've listened to the Arditti more, though mostly because I had them first. Also the Symphonia large orchestra piece, released on DG's 20/21 series years ago, probably still available [that also contains the Clarinet Concerto, which is quite nice in its own right]. The Double Concerto is probably a must hear, also. He's got a lot of stuff at this point, though I'd gather that those pieces would be a good barometer for you.

The Betty Carter with Gerri Allen is called "Feed the Fire" & the rest of the band is ("England's own", it was recorded in the UK) Dave Holland & Jack DeJohnette. It's one of the few times she performed with a band of all pros, rather than a mix of up & coming players and, while a lot of those bands were very good, this session is great.

I like John Carter a lot as well; his solo disc as already noted is very good, as are the late (mid-1980s) ensemble works, most of which are part of his suite of suites based on the African Diaspora.

I've listened to a lot of Elliott Carter, and certainly have more recordings than I need, but I can't imagine a recording of a work that would blow someone away if they haven't already bought into the style. As a series of sonic events, I like some works a lot, but for me the effort required to follow the various strategies in which various subsets of the ensemble are playing in divergent styles has rarely felt worth it after the fact.

For me, it's a lot like listening to some recordings of Zorn's game pieces or a large ensemble of live electronics players like, say, the Hub, the League of Automated Composers, Tudor's Composers in Electronics or MIMEO (all of which I generally like more than Carter). The play of sonic interruptions and contrasts may work for me, or not, but the rules for a particular performance are so often inaudible, that the form & structure rarely matter much.

Finally arrived in the mail today and noticeably lifted the evening's spirits, thanks again.

More EC recs, briefly: Eight Pieces for 4 Tympani, which lay out a good deal of Carter's rhythmic innovation. There are moments in the Piano Sonata when the instrument's harmonics are laid bare and become nearly visible. And the Cello Sonata is brash, vital and entertaining.