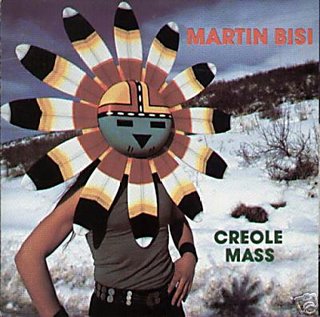 Ya gotta admit: That's a cover. I suppose I picked this up due to Bisi's name having appeared on a number of Celluloid and other releases as engineer; dunno. Frith is on a couple of tracks, Lee Ranaldo on one. But it's a pretty bizarre mishmash, melding Latino/Amerind inflections to the sort of juicy exotico-rock people like Nicky Skopelitis and Laswell were doing around this time (1988). Does it work? Well, not really, though there's enough sloppy good will and earnestness to hold your attention...maybe. I guess it's, aside from those guest appearances, essentially a duo between Bisi (drums, voice) and Sandra Seymour, a kind of interesting-sounding guitarist/bassist about whom I know nothing. A lot of effects-laden detritus, however, that really drags down a few tracks.

And of course, there's also "Kaw Liga". I suppose for those of us of a certain age, some songs are just there, just part of the fabric of space-time in which you were raised. I can't recall a specific instance, in my childhood, of ever having heard this song or having seen Hank Williams or anyone else perform it on TV. But I must have, 'cause the damn thing was and is instantly, scarily, recognizable. Bisi pretty much rips into it with unwarranted gusto, with Frith providing some modernistic folk fiddle for texture, and it's like watching a grisly, unfolding accident. Cuh-reepy.

On an entirely other front, I'm enjoying in an interesting way the Tomas Korber/Bernd Schurer disc on Balloon & Needle, a label out of South Korea run by Choi Joonyong. It's not so much that the music is so striking--it's fine and all--but there's a real nice unforced quality in the sounds and an unusual airiness in the recording. Hard to describe, but it's one of the more unhermetic sounding releases in this area I've heard recently. Something very kitchen table, window open about it.
Posted by Brian Olewnick at 3/01/2007 06:53:00 PM

Too stubborn to ever show a sign
Because his heart was made of knotty pine!

that song rocks. the Hank Williams version, I mean, of course.