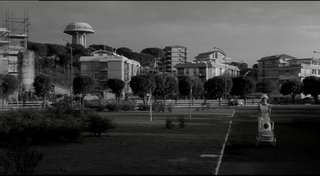 I picked up Antonioni's "L'Eclisse" yesterday, watched it this morning. Another incredibly beautiful film, maybe even a half-notch up from "L'Avventura". So many deeply evocative frames, like the one above with the "mushroom" structure and the nursemaid. The use of objects was fantastic, including especially their sound, from the small table fan in the opening scene, to the windblown, night time flag poles. I guess it's been commented upon often enough that his landscapes and cityscapes can render the characters almost insignificant and it happens here numerous times, giving the impression that they're merely visitors, that the hills, buildings and machinery will remain. Great stuff.

Among the musicians I got to know and enjoy while working at Environ back in the late 70s, one of the most purely pleasant individuals was the drummer, John Betsch. I think he was just beginning his tenure with Abdullah Ibrahim and would soon become Steve Lacy's regular drummer. Just one of the nicest, warmest guys you could ever meet. As far as I know, he's only released one recording as a leader, "Earth Blossom", issued on Strata-East in 1974, under the arguably unfortunate name, "The John Betsch Society". Like its leader, its an extremely enjoyable, user-friendly album. Recorded in Nashville of all places and the rest of the band seems to be made up of local session musicians (some of them were in Jimmy Buffett's band around the same time) but as near as I can tell, didn't establish themselves much in the jazz world: Bob Holmes (keyboards), Jim Bridges (guitar), Ed "Lump" Williams (bass), Billy Puett (flutes, tenor sax, bass clarinet), Phil Royster (percussion).

The music could be described as acoustic pop jazz but in the best possible way, like a good Stanley Cowell album from the same period. Holmes and Puett are particularly outstanding here, both in their writing (each contributes two pieces) and playing, making one wonder why they never achieved wider acclaim. Tons of eminently hummable themes and relaxed, imaginative playing. Why this worked so well when the "same" thing would likely sound flat, forced and thin today has always struck me as an interesting question. I have to think it boils down to the much decried idea of "newness". I'm sorry, but when there's something new in the air, some sense of exploring new areas (and it's not even like this is a remotely avant session--it's more in that pastoral, funk jazz area which was also rather new at the time) some sense of vitality and excitement tends to creep into the playing. How much better, more full of life this sounds than (to pick on my standard whipping boy) your average William Parker Viz Fest performance.

Did anything on Strata-East ever make it to disc? Maybe some of the Music Inc. records? In any case, see if this is around for download anywhere. btw, another one for you Destination-Out guys to consider.

"L'eclisse" is excellent - I picked it up during the holidays. I hadn't seen it is such a long time, and despite a few obviously period details, it is very relevant and beautiful (esp given our recent market trouble! prescient!). excellent camerawork and the usual poetic vacancy of Vitti. Alain Delon is perfect. I had forgot about the montage-y modern ending, but then remember how it struck the first time I saw the movie (a bit of shock - a bit of poetry) - and am curious how you took it. that's all.

I'd read a little bit about the ending so I was expecting something along those lines. Some of the scenes, the revisitings of earlier-seen sites so as (I imagine) to indicate that Vittoria had indeed chosen not to pursue the relationship, I thought were a little bit heavy-handed, actually, though still poignant. On the other hand, the "new" images--the elderly gentleman standing (waiting for a bus?), the people returning home from work and, of course, the concluding streetlight sequence, were just fantastic.

"Did anything on Strata-East ever make it to disc? Maybe some of the Music Inc. records?"

The Live @ Slug's set are out on disc, I picked one up at DMG a year or so ago. The Tolliver stuff has all been re-released on disc now as part of the Mosaic set, as well.