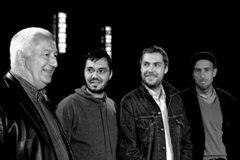 "Mass" is a project joining the ensemble Looper (Nikos Veliotis, Martin Kuchen & Ingar Zach) with my favorite pianist in the world, John Tilbury. Their initial release, a DVD on Esquilo records out of Portugal, arrived yesterday. This was a highly anticipated offering in that, aside from Tilbury, Looper's "Squarehorse" (absurd) was a much-loved disc from last year and the prospect of the four musicians together seemed especially juicy. I'll withhold more detailed judgment until subsequent listens, only to say that of the two tracks, the first falls in line with more or less what I'd have expected, that is to say, long, rich dronage with piano surfacing periodically, either in brief melodic patterns or stroked, tapped, etc. All well and good, but the second performance is happily a whole 'nother issue, a rough and complex piece that will bear much further investigation.

However, I gotta say that the video accompaniment, by Veliotis, does almost nothing for me. Consisting of layered images of a (generally, intentionally kitschy) religious nature, the means of creation becomes clear after a minute or two and then ceases to have very much interest aside from this of that fleeting visual effect. You keep waiting for a new tack but it never arrives. Worse, after lasting through the first work, the entire video recapitulates for the second. Again, more later in the write-up I'll do for Bags, though in the case of the video, I'm not sure there's much left to discover.

brian,
the same issue with the disc's visuals poped up in other places too, i think it was hatta who made similar comments in ihm. from my experience with MASS & from watching a solo veliotis performance that worked along the same lines, i have to say that the visuals work less well when the viewer treats them as a seperate, complementary element. the way the images are sequenced serves no other purpose than striping off the familiar elements -where your mind would normally linger, so what is left is (for lack of better description) a visual drone. when i saw the solo live performance ("vomvos") i could at times forget veliotis was on the side of the projection playing, though i could still feel the effects of the music. the performance was most powerful when one was immersed in the audio and the visuals, no longer able to pay attention to seperate elements, structure and such.
anyway, i'm just feeling that many people have come from the "squarehorse" side of this and have aproached the disc starting from the audio, which i think is unfair taking into consideration that looper have gone to great lengths to present it only as a dvd.

as for the two audio tracks, it is obvious that we are talking about two realisations of the same work, the visuals being the binding, or the composed element. for me it would be interesting to treat them as evidence of how the work of the musicians has evolved -two performances on the same material- but not as two seperate improvisations

Going from the performance video extracts that are included on the disc, I didn't get the sense that the musicians were particularly reacting to the video images (with the possibly exception of Tilbury, they were facing away from the images unless they had monitors that I missed). This actually added to the sense I had while listening/watching the two principle tracks of no real affinity between the music and video. Now, for all I know, the musicians had already immersed themselves in the video, knew it well enough to improvise with; could well be.

I leave open the possibility I could be missing many connections here, but on first blush, the video images (for example, the overlaid images of a Jesus head and the head of the bespectacled man) struck me as cursory and not yielding of deeper insight. Purely visually, there were nice momnets (the corruscations around the edge of one set of images which, to be sure, one could relate to the granularity of the music) but I had a generally rough time really integrating the two.

Robert, if you've seen/heard this, I'd be curious to get your thoughts.

I seem to be one of the few that liked the visuals. I should start by saying that I really struggle to enjoy /retain focus on these audio/visual things anyway at the best of times, seeing as most of my serious home listening to music is done with eyes closed and I just don't seem to be set up personally to be able to concentrate with two senses at once (!)

However, the slow evolution and gentle movement of the Mass images were actually condusive to the kind of calm state I prefer to be in when listening to music and so I found them easy to live with.

I enjoyed the images from a purely abstract point of view, watching the shapes that appeared and disappeared as the images moved across each other and drifted in and out, the semi-accidental blends of colours etc... The subject matter didn't really concern me that often, but every so often I did find it slightly disconcerting to be sitting watching religous imagery and finding it enjoyable.

You could probably argue that I could have been sat in front of a Rothko painting and had a similar or far better experience, but I generally enjoyed Mass.

As I've said before with regard to the mixed music/visual releases that have been becoming more and more common the last couple of years, as much disagreement among listeners as there's always been with regard to the music, there's bound to be at least twice as much again with any visual component.

Richard, you, like myself, have a visual arts background and I'm guessing we'd agree on a good bit and disagree on other work, this possibly being an instance. For myself, Nikos' manipulation was too easily deciphered (I wanted more mystery) and, once deciphered, too lacking in purely visual intrigue to hold my interest. I'll add that the slight back and forth rocking that predominates the latter half or so of the video began to really gnaw at me. I could imagine it working better if I thought there was some naivete at play but other aspects are too sophisticated for that.

I should add that all this is after merely one watch/listen so I reserve the right to entirely change my mind at a later date (!)

I totally agree that it took all of a few moments to decipher the visuals. It didn't come across as a particularly 'deep' work in any way. I just found the visual elements relaxing and condusive to the kind of meditive state I like to enjoy when properly listening to music of this type.

I've only watched the two sets through the once as well so far, and I have a feeling that the effect won't be as nice on subsequent viewings as the novelty value probably wont last long.

I guess a lot depends on what you expect from this kind of project. In the case of Mass the visuals served as an assistance to my enjoyment of the music rather than being a stimulant on the same level, which is probably not how the project is meant to be experienced anyway.

I hadn't looked at the IHM thread before just now. Have to say, I pretty much agree with hatta there, maybe a smidgen or two less harshly.

Since you read my comments on IHM I think that sums up my position pretty well. I agree with you entirely and must give you credit for putting it more diplomatically then myself ;)

I have to admit to being somewhat dumbfounded by those who have been enjoying this. There are issues of taste and all that but in general I've always felt that I can tell when something is still well done even if it doesn't appeal much to me. This video though is shallow, art student kind of stuff, amateurish to the highest degree. I could see how perhaps those who are absolutely unfamiliar with digital media might find the layering effect interesting but not anyone who has spent any time with Photoshop. The use of religious imagery is just cheap and easy, the kind of thing you see in school before people really have much to say.

Too each their own as always, and I probably should watch more before saying anything else, but damn I don't want to. Like you though I did enjoy the music and intend to listen to this as a double CD in the future.