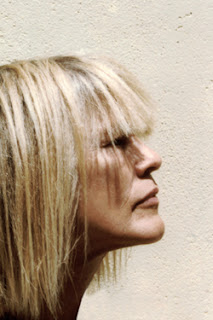 So, Carla Bley. I hadn't heard "A Genuine Tong Funeral" until about ten years ago when a friend found it for me in a used vinyl shop (thanks, Peter!). While it's a good, solid recording, it made clear to me just what she was talking about when, somewhere in the early 70s, I read her comment that it was "Sgt. Pepper" that drove home to her that she wasn't a jazz composer but a pop one. (I think I'm paraphrasing accurately). At the time, I was a bit put off by the statement but nowadays, I think she gauged things well. "Tong" is missing much of what makes a good jazz album. It's fascinating, interestingly constructed, well played, but straining at the leash in some respects, overly confined to a stylistic form. Happily, Bley would explode all that with "Escalator Over the Hill."

EOTH was a very early venture of mine into jazz/jazz-rock/electronica/general weirdness and had a huge impact on me. It seems to be one of those recordings that, to someone half a generation younger or older, it's difficult to see what all the fuss is about but for myself (and numerous people my approxiamte age whom I've encountered), it's a milestone. Proto-post-modernist, Bley freely interspersed musicians (and artists and writers) from wildly diverse backgrounds into Paul Haines' amazing collection of verbiage. Linda Ronstadt and Charlie Haden? Why not? Viva, Don Preston and Roswell Rudd? Sure. Commonplace (sorta) nowadays, but just not done at the time. Sprawling, messy, overblown, extravagant, arch--yep and it works. Possibly my favorite playing from Barbieri and McLaughlin. Amazing Don Cherry on trumpet and voice. The great, great Jeanne Lee. And those words...No lyricist I'd rather wallow in than the late Paul Haines.

Stop refusing to explain
Give up explaining

Lack of a stereo (stolen, 11/76) for several years meant I didn't pick up the next couple, 'Dinner Music' and 'Musique Mechanique' (nota bene: I file the fantastic '13/ 3/4' under Mantler just because of the superiority to my ears of his composition) but I reacquired a system in time for 'Social Studies'. Always liked the cover: 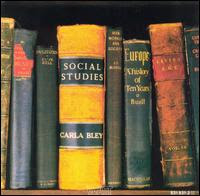 Adored it then but listening to it now, it palls a bit. Handsome, yes, but draggy and too careful overall. I remember loving the Steve Slagle feature, "Utviklingssang" at the time; don't know how I tolerated the dreadful backbeat. Not a bad recording but the sizzle has become decidedly soggy.

The Nick Mason record, 'Fictitious Sports' (yes, just like I don't file 'Tong' under B for Gary Burton, I file this under Bley since she wrote the music. Mason merely sings it) is actually still a bit of goofy fun. Would never have thought it would hold up better than 'Social Studies' but it kinda does.

I gave Bley one more chance with the Live! record on Watt/ECM, whose creepy cover I can't bring myself to reproduce here ("Carla, we might sell more copies if you show some leg!"). By this time, her music has settled into jazz-rock pastiche, really tedious, like a slightly hipper version of Paul Schrader's Late Night band. Someone gave me a disc of the Very Big Band from the early 90s that's even worse. Haven't read anything in a very long time that's gotten me remotely curious to hear even more recent work.

But for two very great, very beautiful records and for opening up several worlds of music to a 19-20 year old, thanks, Ms. Bley.

I am pretty sure it is Tony Dagradi that is featured on the Social Studies version of Utviklingsang.

You could be right. For some reason, I always had Slagle in my head.

agh, nothing much. About a month after I moved to NYC in October '76, our apartment was broken into, likely by the super's kids, and my stereo was taken along with some other stuff (they left my records!). Being pretty close to dirt poor for the next couple of years, getting another was out of the question. otoh, those were the years I was working at Environ so seeing 4-5 nights of music a week anyway. When I started dating Linda in '78, her ownership of a stereo was a big plus!