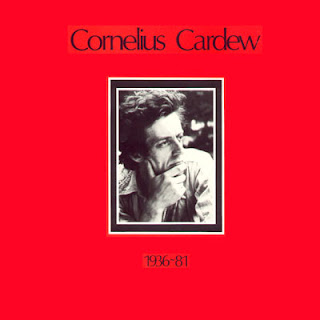 I'd been searching for this for quite a while, finally saw it come up on e-bay in late February, bid on it and won. Arrived yesterday.

This is a double LP recording from the memorial concert held for Cardew on May 16, 1982. There's a very large cast of musicians--one of the mildly annoying things about the Impetus release is that individuals aren't credited on the various pieces so you have to do a bit of guesswork as to who's playing when.

Side One has three works from his more avant-classical folio. First Movement for String Quartet (Balenescu? Bryars?), Octet 71 (not at all sure who's playing but a gorgeous work) and an extract from Treatise (AMM, John White I think on tuba, maybe Ian Michell on clarinet, a bassoonist, others). The second side is the performance of Paragraph 1 from The Great Learning that was included on the Cortical release a few years back. Side three has three lovely renditions of Cardew's political piano pieces: The Turtledove (with soprano), "The Workers Song" and "Thalmann Variations". Sounds to me like it's Rzewski playing and the latter work is especially beautiful. Count me among the few who find his music in this area quite deep and moving. The final side....is People's Liberation Music. Those of you who've heard the recording from around '73 that appeared a few years ago will understand my apprehension but, actually, while by no means great, the band of earnest socialists had smoothed out some (musically) by '82 and the songs aren't too offensive. Well, yes they are, but not nearly as bad as the earlier release. Though every time I hear "Smash the Social Contract!" it's tough not to grin. Listening at the moment to "There is only one lie. There is only one truth." Yikes. Don't think this was on the earlier disc (?). Essentially a denunciation of Soviet imperialism. Interesting lyrical content.....

Anyway, very happy to finally have gotten a chance to hear this.

Heh Brian, I think you outbid me on that one. I'd like a real copy as well, though I've had a rip of it for years. It is conveniently available at UbuWeb here.

I agree with you on the content, pretty the non-song stuff is great, and as far as the song material goes its a decent take on it of at least historical interest. IMO that Treatise except is one of the better ones. Does the album have any information on which pages from Treatise they play? I'd like that information for my Treatise page.

hee-hee. I was figuring I probably knew one or more of the otehr bidders. Sorry about that!

There's a booklet with the album that cotains a lengthy essay by Tilbury but nothing specific to this performance. However, page 183 is reproduced so I guess it's possible that's the page being done. Also, though "Octet 71" is printed a few times, isn't it "Octet 61"? The score for that piece is also reproduced here in the margins of Tilbury's text along with that page from Treatise. Didn't think Cardew was writing that sort of composition in '71.