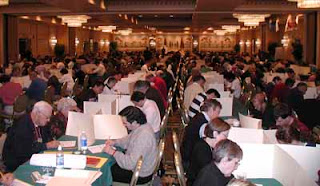 So, in my little descriptive over there on the right, I mention crosswords. Well, it's far geekier than that. Since 1983, I've competed in crossword tournaments, since 1987 at the US Crossword Open in Stamford Ct. That event occurs this weekend.

About 500 people gather each spring to race, preferably with accuracy, through seven puzzles, seeing how they stack up against the country's best (a few from outside the US as well). Hosted by NYT crossword editor Will Shortz, it's as dorky an affair as anything this side of a Star Trek convention--I imagine there's even some overlap. A high percentage of folk who you get the impression emerge from their warrens once a year, blink at the sunlight, then waddle over to Stamford to compete. Many of them are absurdly good at it, ripping through puzzles at superhuman speed. You can get a sense of the bristling excitement of the event from the pic above. I'm half-decent, finishing 26th last year and having twice made the top 10 (6th and 8th in the early 90s) though those days are long gone--too many fast, young competitors now. If I absolutely ace a tourney, I might make around 15th.

Happily, there are a small handful of relatively normal, altogether interesting people who regularly attend. Among other things, there are actually those whose musical tastes somewhat overlap with my own, shockingly. Joshua Kosman, a music critic for the SF Chronicle, is a regular attendee; he knows his contemporary classical far better than I, among many other things. Tony Dutra used to share a house with the guys who ran About Time records in Boston in the 80s and knows his way around avant jazz. Ran into another guy at one of the Bang On a Can marathons a buncha years back--the last person you'd think to have a Xenakis fetish, but...And of course, Dan Okrent, all around bon vivant and geek who, inexcusably, unwittingly scheduled a vacation in Venice on the same weekend as the tournament and, even more bafflingly, didn't cancel it when he realized his error! I mean, really.

I dream of the day when there's an impossible clue where the crossing entry is "UK improv ensemble" (3 letters). 499 other people are squirming, trying to choose between ARM, ACM, ABM etc......

[I should put in a plug for the documentary, "Wordplay", a totally enjoyable, even-handed look at this neck of the woods. Very funny, very geeky and, seriously, pretty dramatic insofar as the 2005 tournament final puzzle. Check it out. I think my back is in there once or twice.]
Posted by Brian Olewnick at 3/22/2007 09:44:00 AM

Any favourite crossword clues? I squealed with delight the day I read the clue (it was either Paul or Araucaria in the Guardian) which involved an anagram of "presbyterians", and to which the answer was "Britney Spears".

I have indeed seen the Presbyterians/Britney Spears anagram--an excellent one, to be sure. Not certain about any favorites though I remember way back in college when I began doing cryptics (which I love) and came across "manslaughter/man's laughter" for the first time.