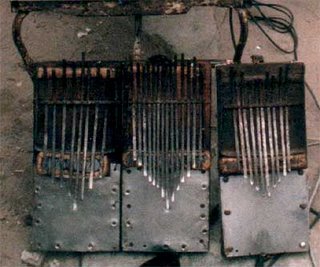 Record club last night worked itself into a soulful, songlike groove. Luckily, as it turned out, I had nixed a Christian Wolff piece (would've brought the evening to an awkward halt) and went with a track from Loren Connors' fine singles collection, "Night Through"--I'm forgetting the title...a traditional Irish piece with "Bonny" in the name--which blended in fairly well. Second round was only a bit dicier with Taku Sugimoto's piece from "Opposite", "Spoon River", providing a nice, reflective pause. (I also enjoyed considering those two, from 1996 & 1997 respectively), alongside each other, Taku taking Conners' hyper-stretched out elegiac approach and evanescing it even further...)

Zeena Parkins was a guest at the proceedings last night and a very enjoyable one. Her first offering was a fantastic track from Konono No.1, a Congolese troop who (I guess among other things) fashion mbiras out of used auto parts and such as pictured above. Wonderful piece; the disc is on my list to get now. Other highlights included a live Otis Redding performance from Europe of "I've Been Loving You Too Long", a wild number by some Bakersfield area rockabilly band from around 1960 (blanking on their name), Billy Strayhorn's "Your Love has Faded" and a great Buddy Guy/Junior Wells tune also from around '61.

[btw, re: my doppleganger's comment--back in October my initial self-googling post was instigated by some bizarre results that surfaced when I plugged my monicker into google's image search. The ones I mentioned at the time have blessedly disappeared. In their stead is this: 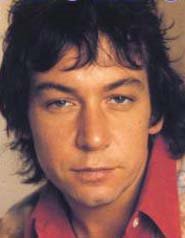 Hi, Brian, it's Brian Olewnick. Sorry about the tacky post - just wanted to say hello in response to your comical "Googling yourself" article.

Schoharie Brian?!? How are ya? What's with you other Olewnicks out there? Drop a line if you like (bolewnick@verizon.net) so as not to bore the thousands (well, dozen or two) readers here.

The Konono n°1 album on Crammed is OK, and even if the repetitive aspect is the main thing, maybe the disc is a bit too long/redundant. I guess they're more a band to see on stage...
Lots of videos on Youtube + another one on Crammed.
http://www.youtube.com/results?search_query=konono&search=Search

Funnily, they also appear on a split LP with... The Dead C ! (well, after all, FatCat also released a Merzbow/AMM split...). They're also supposed to record with Björk...