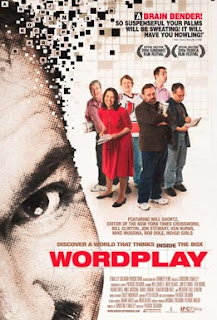 I take it for granted that everyone reading this blog has seen the "Wordplay" documentary from last year. If you haven't you should. It's actually very entertaining and informative no matter how little interest you have in the subject. Well, hundreds of thousands of people have apparently done so and a good two hundred of them decided to show up to Stamford this year, raising the field from about 500 to 700 contestents. Unfortunately for me, at least a few of those 200 are pretty damn good solvers.

I did once again manage a mistake-free tournament, my basic goal going in. But when I did it last year, I notched 26th place. The same performance in 2007, with no appreciable reduction in speed, only netted me 42nd. *sigh* Not bad, of course, and still roughly sitting in the same percentage slot vis a vis the field, but I fear I'll never see the top 20 again. Good, geeky fun in any case, great seeing the few folk who I generally only see once a year. Phil Donahue competed this year; weird. Never actually caught sight of him. Checked his results though--he sucked. In quasier celebrity land, Jerry Orbach's son was there for the second year--nice guy.

Last year, they gave an advance screening of "Wordplay". This year they had an hour-long feature of outtakes, publicity tour film, etc. Great Jon Stewart outtake where he's solving an NYT puzzle, generally ragging on Will Shortz in mock-combative style. At one point he goes, reading a clue, "Like Mary's little lamb, eight letters......fuckable." Why that didn't make the cut, I've no idea.

Word geek quiz question for the day: What plural form for members of a religious denomination anagrams into the first and last names of a well-known singer?

Well I've racked my brains for a couple of days and can't think of an answer, unless you are thinking of that popular Irish folk singer Christian O'Throdox?

Give us a clue? Are we thinking of one denomination in particular, or just the group name for ANY set of religous folowers?

One denomination in particular. ie, the answer could be "Lutherans" were there a singer named Asher Lunt.

I'm heartened to hear that you're giving it the old Oxford try, though.

My guess would be the late, lamented punk rocker Budd Shits.

Allright, Pinnell, avert your eyes if you're still going for it:

Argh! I came here to post the answer. I had it last night, I swear...

OK then, name another religion (this time the adjectival form, eg, Jewish) that anagrams into a two word, popular food product (brand name).

*Pixelated smack across the back of the head.*

Brian, I was aware of the Britney Spears anagram as I'd read you mention it somewhere very recently, possibly even in these blog pages?? So i assumed the answer was somethign else again. Sigh... all that brain wracking for nothing!

OK, I'll have a think about this new one, but if we are talking branded food is this likely to be an American brand that I've never heard of before I get too involved?

Richard, it is indeed an American brand but I daresay you've heard of it and then some.