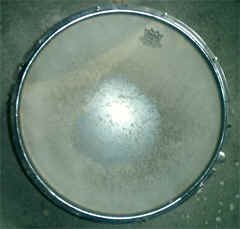 I find myself getting more and more finicky at live performances of improvised music, not so much for the music but for the performance aspect. I'm guessing that in the overwhelming number of cases, the musicians "simply" set up in the stage area and play. Often, of course, this is entirely appropriate to the music though from my vantage it's difficult to see a clear rhyme or reason why this works and that doesn't. Sometimes, however, given the music that's produced, a staged performance--sitting in front of an audience--doesn't seem to me to be the best way for the music to be experienced.

These and other thoughts crossed my mind last evening while listening to Jason Kahn and Jon Mueller playing at Experimental Intermedia. Their set was different than the music on their release from last year, "Supershells"--less monolithic for one thing--but still generally revolved around drones. Each concentrated on snare drums, though in different aspects. Who'da thunk several years back that the snare drum would be so prominent in new improv? Kahn began by rapidly tapping with thumb and ring finger on a brass (?) gong (of the Asian variety--about 1/8" thick with a cymbal-like flattened bell on one side) overturned on top of the snare, subtly augmenting the resultant sound with electronics. Mueller had a snare lying atop a sound monitor, its strings being brutally excited by the throbs therein. Vibrating snare strings was one of the central sounds of the evening, actually. Requires a little reorientation for those of us who, traditionally, have found such sounds to be an irritant at "normal" music shows. He also played a gong and brushes in a more standard manner, but did his most interesting work on that snare, using his hands to dampen or open up the vibratory effect.

Kahn did some wonderful stuff with controlled snare feedback. I've no idea what the actual mechanics are, but from the audience it's as though a feedback charge is slowly built up in the snare. Kahn allowed it to well to a point just short of aural pain, and would then bring his cupped hand into contact (or near contact?) with the drum head, somehow "containing" the feedback. Very cool.

As an entirety, however, the performance didn't particularly cohere. For me, part of it was simply the physical fact of the duo being situated in a "stage" environment and the concommitant restriction of the sound source area. I very much wanted to hear a more pervasive, thicker sound and, given XI's speaker potential, felt the space could have been far better utilized. In fact, about 2/3 of the way through, during a quieter portion, I heard a fantastic, very alive sound from the rear of the space and momentarily thought they might have done just that: had speakers there at the ready for late activation. Turned out to be cars outside driving over planks in the road, providing a luscious double-thump. It worked, in any case. But I couldn't help feeling that the performance would have been better served had the duo been secreted behind the baffles on either side of the audience space. A good portion of their sound was of the "industrial drone" kind, the sort of thing I find more enjoyable experiencing as an environmental artifact as opposed to the overt product of a musician or two. I've no need to look at someone doing this, even though both musicians last night evinced a certain amount of physicality in their playing. I could, and did, shut my eyes fairly often but there's still the narrowly focussed sound in front of one. Needless to say, I'm guessing this problem wasn't encountered or even considered by most attendees.

It's interesting, to me anyway, how this issue does or doesn't arise for a given performer and that it has little to do with how abstract the music is. For example, I'm perfectly happy to hear and see Sachiko M. or Toshi Nakamura perform even though they're doing next to nothing in terms of motion and the music is (gorgeously) static. At the other end of the eai scale, I thoroughly enjoyed something like Fennesz' solo on guitar and keyboard which was quite emotive. In each case, perhaps the salient point is that the sounds produced don't especially merge with the ambience or sound as though they might in most circumstances. Kahn's and Mueller's music was on the other side of that divide for me. I imagine I'd feely similarly about, say, nmperign for example, or hearing one of Sugimoto's recent works. In fact, I loved his Live from Australia set largely because his musical presence receded into just one element in the soundscape; you had little sense of him existing as a focal point.

Meandering here and probably not stating things well....In any case, it was very pleasent to meet both Jason and Jon and to have the opportunity to thank them for the fine things released on theie repsective labels (cut and crouton).

…It has little to do with how abstract the music is.

What do you mean by abstract in this context? Do you mean a kind of ‘all ears’ ‘absolute music’? Or do you mean a musical practice in which, as often happen in electro-acoustics, the action-response mechanism is obtuse, or (in the case of software mediation) arbitrary.
Interesting post, BTW.

tig, "abstract" may not have been the best choice of word but I was just wanting to get across that the line didn't have to do, with me, for anything like the purity of a Sachiko M sine tone *or* the lushness of Fennesz, as arbitrary representatives of eai. A better set of poles my be concision and diffusiveness. Both of the above are sonically concise in that the sound explodes out of them. Whereas nmperign (again to use an arbitrary example) or most of last night's music strikes me as more diffuse in character. This, of course, is not a value judgment at all. It's just that *if* the music has this character (to my ears, necessarily--it could be different to its cretors) I'd generally like to hear it presented in a manner to take advantage of these characteristics.

Two things--1) as an active audience member one can, and I have when the opportunity allows, resituate oneself to create a better mix in the room, for instance moving away from the performance area where other sounds permeate. 2) We mus always allow for a "perverted" tack by the performers, intentionally going against what might seem the better option--sometimes you gain results that couldn't have come about any other way.

In any case, I get the sense that the entire issue isn't thought about as much as you might expect, given the general pronouncements of the musicians involved re: awareness of the space, etc. I think (inevitably?) a routineness tends to settle in.

I think we are about in agreement on the Kahn/Mueller show at XI. I was particularly excited at the beginning of the set (when things when quieter, less dense) for the intrusion of the traffic on Centre St (this can be heard on the Andre Goncalves/Kenneth Kirschner "Resonant Objects" recording, which was done at XI), but for most of the set the outside was kept firmly at bay.

Overall, I enjoyed the performance - small touches and highly repetive gestures keeping the sound in motion, but without drastic change, in the best tradition of drone. Like their respective recording enough that the differences, the "instants" of a live performance gave it dimension. As an audience member, though, the ~hour long set length, while it revealed plenty of beautiful material, seemed long (I think I am thinking of your "diffuse" categorization in the comments). Had a small debate afterwards along the lines of "let's say you have a really excellent piece of music - if it is too long, does it become bad?" yeah there was that awkward phrasing, but it was an interesting chat. I've just been a fan of brevity lately (not to say that a given piece of music/performance has to be short!).

Kahn's new album (picked up at the show) clocks in at under 40' for seven tracks. Which is enough to make me listen again!