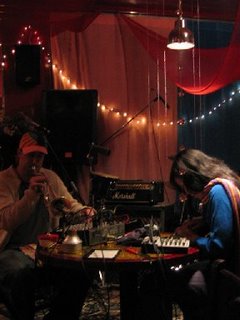 Went in early on Sunday afternoon to meet the estimable Pan Schaumann at the bar, dba. A pleasant surprise to see old Record Club member Sasha tending bar (Actually, I knew she worked a bar in the area, just hadn't realized it was dba). Schaumann, in from St. Louis, insisted on buying me a large bottle of a rather strong Belgian beer, De Proef Flemish Primitive Wild Ale which I emptied in about an hour. I'm not a drinker. I haven't been drunk since I was 17. This may have been the dizziest I've gotten since then. Thanks, Mike!

So, we stumbled on over to Tonic for the final night of the fest. First up was the trio of Tim Barnes/Jeph Jerman/Sean Meehan. They positioned themselves in front of the stage and, as my wallside seat was one table further removed than previously, I had absolutely no view as to what, specifically, they were doing. Which is fine as I tend to close my eyes anyway. Apparently Jerman had some tiny motorized devices wandering across his frame drum, Sean was rubbing the old dowel and Tim, I'm not sure what he was doing. But, unsurprisingly, it sounded fine; subdued and subtle with all sorts of textural variation, the type of thing I could happily listen to for hours.

Ami Yoshida/Christof Kurzmann were next, hot on the heels of their new release on Erstwhile, "Aso" which, after a couple of listens, I think I can safely recommend highly. I know Jon thought it was the set of the festival and while I think I can see where he's coming from, I was a bit less enthusiastic. There were moments that were extremely beautiful, especially the last 6-7 minutes including a very long spell at the end where Ami froze in one position, possibly emitting the slightest of sounds. But much of the rest I found a bit bumpy, swerving toward rapturous moments, just touching them, then pulling away. It's a set I'd like very much to hear again, though, as I may simply have been missing some connections (I was more tired for this evening than any of the others).

English is Joe Foster and Bonnie Jones, here joined by the redoubtable Sachiko M. Foster's been a grating, not to say enjoyable, presence on several websites I frequent, taking me to task at various times; I was eager to see him live. He was manipulating a snare drum (I think--again, they were in front of the stage and my view was generally obstructed) and wielding a trumpet. Ms Jones, who I'd never previously heard, was making use of open circuit electronics while Ms. Matsubara deployed her usual sublime sines. I thought it was the set of the evening. Hard to describe except that there was an added layer of excitement, some extra sizzle in Tonic's ozone while they were playing. Everything just fit together wonderfully. Some of the trumpet, played into the drum, got a little clunky but enough good will had been built up in this listener by that time that I wasn't really bothered. Sorrier still, now, that I missed English's Friday show, about which I heard great things.

I'm not extremely familiar with much of Phill Niblock's work though I've heard a good amount over the years and have always very much liked what I've heard. Jason Lescalleet has been a big favorite over the past five or so years, both live and on recording. Something about the pairing of them struck me as potentially fantastic. Well, maybe not. It was an odd set. Niblock sat at a table below the stage on the extreme left of the room while Jason's large set-up occupied most of the stage proper: a couple of laptops, three or four old tape recorders, a couple of cheap Casio-style keyboards and much more detritus. As the music began to flow from the speakers, he futzed around with some connections then sat behind his computers, hands in various positions around his face, sometimes rocking back and forth dolefully but doing naught else. It became clear that the music was entirely Niblock (again, I was rather blocked, so it was difficult to tell if Jason had set something in motion previously), creating a fairly lush, moderate roar mixed with water sounds. This went on for about 15-20 minutes, creating some amount of psychological tension as one wondered what, if anything, Mr. Lescalleet planned to contribute. Attractive enough at first, I found Niblock's music to pall after a while (again, tiredness may well have been a factor). Finally, Jason rose, having apparently sampled a goodly bit of Niblockian product and intent on regurgitating it in his own fashion, which he proceeded to do. Amazingly, ferociously. Little by little, he allowed layers of sound to accrete via, it seemed, different machines, ultimately constructing an absolutley massive, infinitely dense wall of noise, woolly rather than prickly, tweaking it here and there but essentially letting it just sit and breathe. Now, that is noise. Eventually (it seemed like a very long set, maybe an hour?), he went about turning off various devices 'til there were no more. As a collaborative set, it may not have worked so well but Lescalleet's portion more than made up for it (anyway, as it appears to have been entirely based on what Niblock created; maybe the set did work well).

Lasse Marhaug/John Hegre? Well, I felt duty-bound to stay for the whole thing and did so without resorting to digitally plugging my ears but it was a chore. It was loud, it wasn't terrible, but it wasn't very interesting either. Two minutes in, you were pretty sure what the next x-minutes would bring. There was one sort of cool moment when both dropped out almost entirely, kinda like a bass break in a funk tune. But otherwise, eh.

As always, a fascinating bunch of music to hear. I'm rather amused and pleased at the drastically disparate reactions I'm reading about on places like I Hate Music. I'm not sure there was a single set that someone hasn't judged spectacular while another deemed it shit. That strikes me as a healthy state of affairs. Congrats to Mssrs. Abbey, Barnes & Wolf for managing to piece all this together, to get people, maybe, to think a little bit.
Posted by Brian Olewnick at 10/04/2006 03:25:00 PM

Still kicking myself for not making the fest and the post-fest concerts. But thanks for the reports! Great to read your take on the sets.

Joe Foster is a dickhead

Is that you, Joe?